Disney World Park hours are released approximately 180 days in advance. Disney World changes park hours often. We will do our best to keep our calendars up to date, so please check back often. Report all discrepancies to [email protected].

What is Rope Drop at Disney?

Walt Disney World guests who consider themselves early risers might want to take advantage of what's commonly known as "rope drop" at the theme parks. Rope drop is more of a term describing the official park opening as there is not typically an actual rope involved. Often times, there are much fewer guests in the parks early in the morning compared to what you'll find during the day. A lot of folks like to get up early and take advantage of the lower wait times that could be available depending on how many people enter a particular park on any given day. As popular as it is to arrive early, we find that more folks like to sleep in on their Disney vacations, especially if they were out until the wee hours the night before.

Here are a couple of things we recommend:

After Hours at Walt Disney World

Even though Extra Magic Hours were only made available to a select number of guests, crowds during those timeframes were still a huge concern. In fact, many folks recommended skipping them altogether due to how crowded they can become. With such a high demand for even more time in the parks and pleas from visitors to reduce the park's capacity in order to thin out the herd, something had to be done.

Thus the introduction of Disney Early Morning Magic and Disney After Hours. Both are separately-ticketed events that take place either before the park opens for the day or after it closes and on opposite mornings/evenings from the regularly scheduled Extra Magic Hours. Read more about these special events below.

On select mornings, Magic Kingdom Park and Disney's Hollywood Studios offer Early Morning Magic events that give guests access to specific attractions and breakfast prior to the time that park opens to the general public. The events are currently taking place inside Fantasyland at Magic Kingdom and inside Toy Story Land at Disney's Hollywood Studios.

There is an additional charge for each one of these special events. Regular theme park admission is also required.

For pricing, schedule, and details on breakfast, click here.... 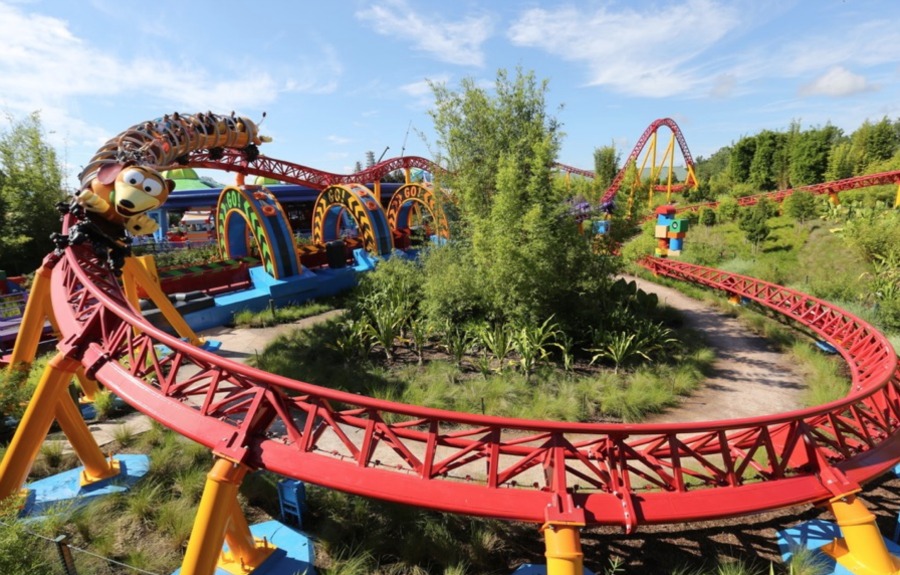 Disney After Hours gives a limited number of guests access to dozens of unforgettable experiences in Magic Kingdom, Disney's Hollywood Studios, and Animal Kingdom such as character greetings and little to no wait at many popular attractions and experiences including many fan favorites. Popcorn, ice cream novelties, and select bottled beverages are also included with the cost of admission. 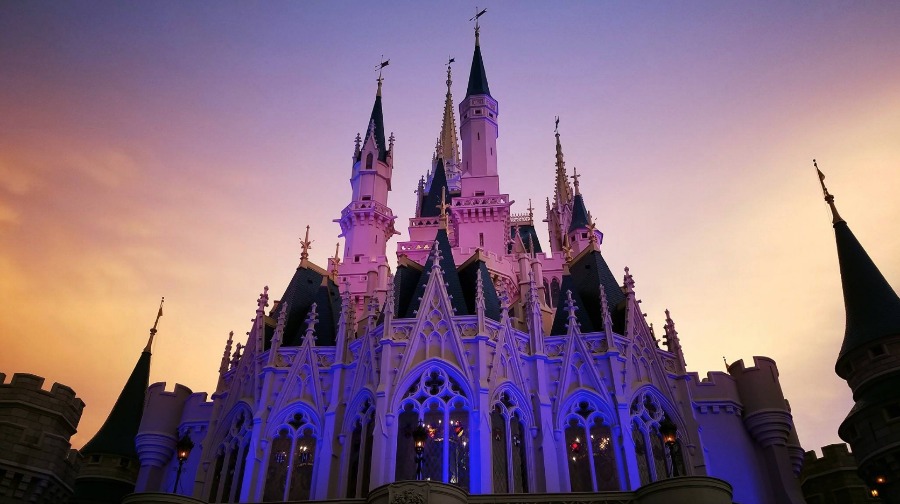 ARTICLE: Check out this column by DIS contributor Jason Dodge: Ranking Fireworks Viewing Spots in the Magic Kingdom (with Kids!)

"Happily Ever After" nighttime spectacular

This new spectacular promises to take the audience on a musical journey in search of their very own Happily Ever After “by showcasing some of the greatest adventures Disney characters have taken to achieve their dreams. The show will feature the latest fireworks and pyrotechnics and original animation, plus a heart-tugging original score. And thanks to the inclusion of state-of-the-art projection mapping technology, more Disney characters than ever before will be featured in the show, including moments from Moana, Brave, Big Hero 6, Zootopia, The Princess & The Frog, Aladdin, and many others." 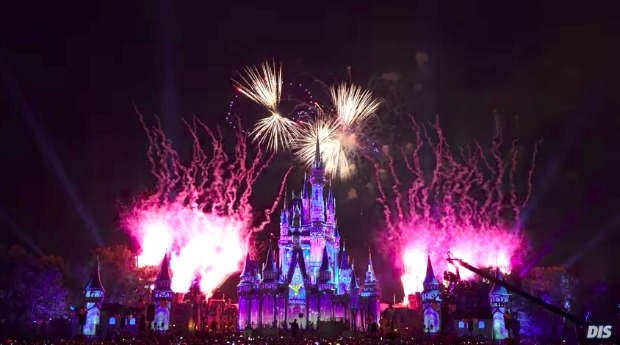 This high-energy parade heads down Main Street, U.S.A. towards Cinderella Castle several times a day. Mickey, Minnie, Donald, and Goofy will host the party plus several other characters will join in the fun as well. It involves guest participation and includes catchy tunes, stilt walkers, and much more. Photos from the street party that are posted to Twitter and Instagram with the hashtag #MoveItShakeItPics may be used in the finale.

Frozen Ever After Dessert Party 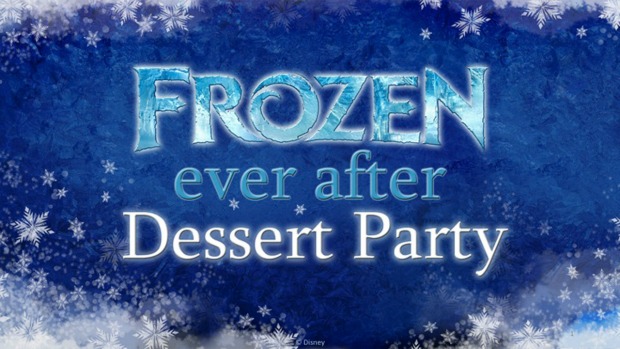 Enjoy a special fireworks viewing area along with sweet treats, specialty beverages, and prime seating along World Showcase Lagoon—with a magnificent view of the nighttime fireworks spectacular at Epcot. The party is held on select evenings.

The plentiful dessert buffet will feature sweet and savory options, which may include:

You can raise a glass of your favorite beverage to toast your day of theme park adventures—and the enchantment to come. Drink selections may include:

After the fireworks, guests will be escorted to the Norway Pavilion to experience the popular attraction Frozen Ever After—a musical boat ride adventure through the wintery world of Arendelle.

Tickets for the party are $79 per adult (ages 10 and up) and $47 per child (ages 3 to 9), including tax and gratuity. Admission to Epcot is required and not included in the price of the party. Reservations can be made up to 180 days in advance online or by calling (407) WDW-DINE. 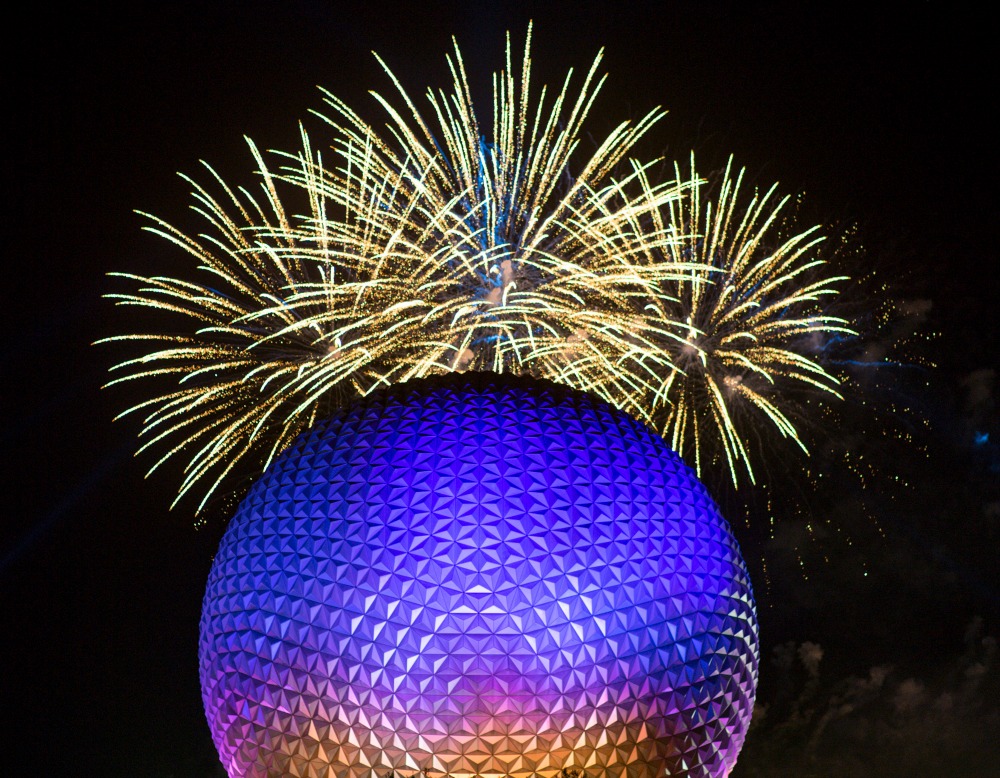 NOTE: IllumiNations: Reflections of Earth had its final presentation on September 30, 2019. The brand new limited-time spectacular called ‘Epcot Forever’ began on October 1, 2019 and features classic Epcot tunes. The show opens with a spark of imagination that grows into an epic spectacle of fireworks, music, lighting, lasers, and special effects kites.

In the Fall of 2020, ‘Harmonious’ debuts and will celebrate how Disney music inspires people around the world. This nighttime spectacular will feature massive floating set pieces, custom-built LED panels, choreographed moving fountains, lights, pyrotechnics, and lasers. No exact premier date has been announced.

The new 'Epcot Forever' nighttime spectacular debuted October 1, 2019 celebrating the past, present and future of Epcot. The new show is a combination of fireworks, music, lasers, and colorful glowing kites flying above and around the park’s World Showcase Lagoon.

As the dramatic curtain-closer to each theme park day, the show takes guests on an emotional journey set to stirring renditions of Epcot music that guests might remember and will surely love. It will bring back fond memories from the park’s history and spur excitement for the bright future of Epcot – a future filled with new attractions and experiences as part of a multiyear transformation already underway.

'Epcot Forever' exemplifies the park’s founding principles – innovation, exploration, imagination and celebration. Children sing of “one little spark of inspiration” as guests watch fireworks that pinwheel, corkscrew, and explode in giant aerial starbursts. Colorful pyrotechnics will fill the night sky as the Epcot story plays out to a grand orchestral soundtrack. Noted conductor and composer Don Harper produced new arrangements of classic Epcot tunes to weave throughout the show. 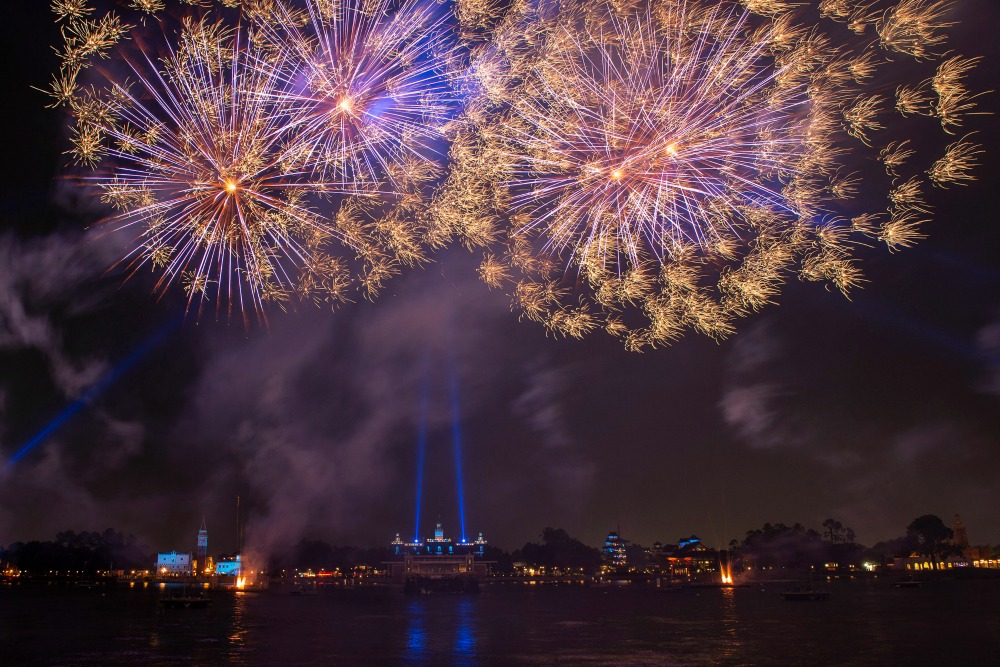 Future World pavilions past and present inspire familiar themes, building to Epcot’s grandest moments. In one sequence of the show, music from Soarin’ Around the World cues LED kites to crisscross the sky giving a kaleidoscopic effect. Guests also will recognize music from Epcot spectacles of the past, including the 'Tapestry of Nations' parade.

In the show's dramatic conclusion, the park’s familiar music will switch to a new verse of “One Little Spark” celebrating the future of Epcot yet to come. As the music and fireworks build, “One Little Spark” transitions to a spectacular finale that brightens the sky one last time with fireworks and special effects.

'Epcot Forever' is set to perform into 2020, leading to the park’s next nighttime spectacular, 'Harmonious.'

Enjoy a prix fixe menu at the Rose & Crown Dining Room, then stay for one of the best views in Epcot! Package includes appetizer, entree, and dessert, plus unlimited alcoholic and non-alcholic beverages.

Book a boat to take you out on World Showcase Lagoon for a private fireworks viewing! 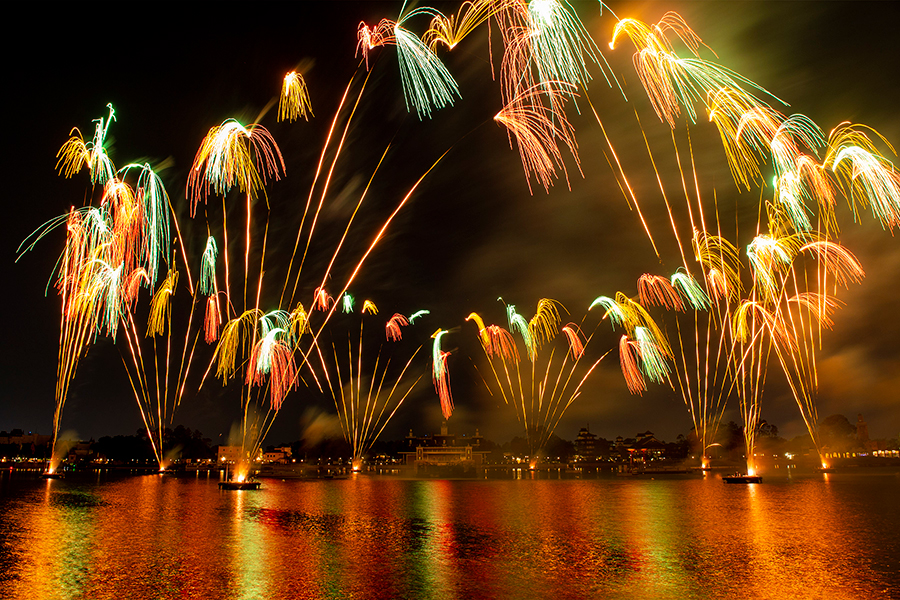 Fantasmic! is a festival of lasers, lights, dancing fountains, and dazzling special effects. Join Mickey Mouse is his dream where he creates dancing waters, shooting comets, animated fountains, and swirling stars. When Disney villains turn his dreams into nightmares, he uses the power of good to prevail. More information

If you want to save yourself the pain of waiting in line, check out the Fantasmic Dining packages.

The Fantasmic! Dessert & VIP Viewing Experience package will provide guests with a snack box that includes a variety of sweet and savory treats such as chocolate-covered strawberries, cheesecake, a chocolate cupcake, apple crisp, California trail mix, and cheese and crackers. Kids will enjoy chocolate pudding with crushed chocolate cookies and gummy worms, confetti popcorn, grapes, and a vanilla cake bite starring Sorcerer Mickey. Also included is a bottle of water and a specialty alcoholic or non-alcoholic beverage in a light-up, keepsake Fantasmic! cup.

At check-in, guests will receive a special light-up credential which will allow them to enter the special reserved viewing area for the show. The cost for this new experience is $39 for adults and $19 for children ages 3-9. Reservations can be made now by visiting DisneyWorld.com/dining or by calling (407) WDW-DINE.

The Star Wars fireworks show, “Star Wars: A Galactic Spectacular,” combines fireworks, pyrotechnics, special effects and video projections that turn the nearby Chinese Theater and other buildings at Disney’s Hollywood Studios into the twin suns of Tatooine, a field of battle droids, the trench of the Death Star, Starkiller Base, and other Star Wars destinations. The show also features a tower of fire and spotlight beams, creating a massive lightsaber in the sky.

Star Wars: A Galactic Spectacular can be enjoyed throughout the theme park on select nights.

Check the My Disney Experience app or the Times Guide at Disney’s Hollywood Studios for showtimes. 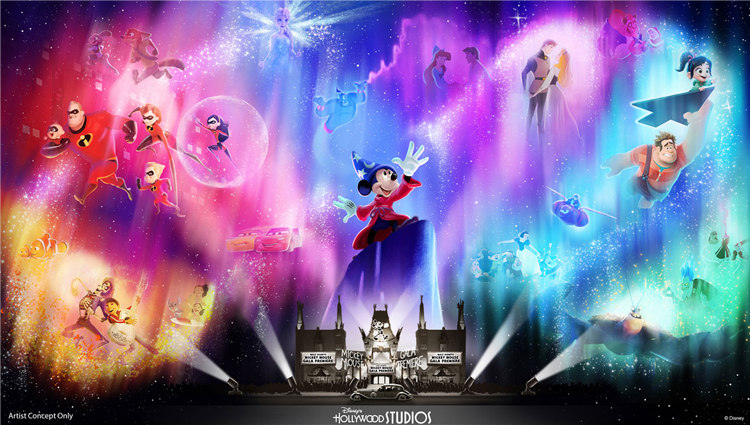 The new nighttime spectacular at Disney's Hollywood Studios that kicked off the year-long celebration of the park's 30th Anniversary! This projection show showcases the 90-year history of Disney and Pixar animation starting with Mickey Mouse.

This nightly "parade" was first performed on October 26, 1971 during the dedication of the Polynesian Luau. While old-fashioned by today's standards, it's still fun to head to the resort beachfronts to watch it go by. The water pageant can be seen from the boat-loading are at the Magic Kingdom, as well as all each resort around Bay Lake. It normally starts at 9:00 each night, but check the Times Guide to be sure. There are two segments, one is a King Neptune theme, the other a salute to America. 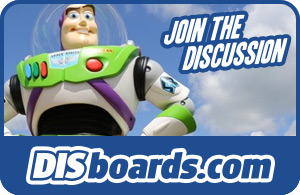