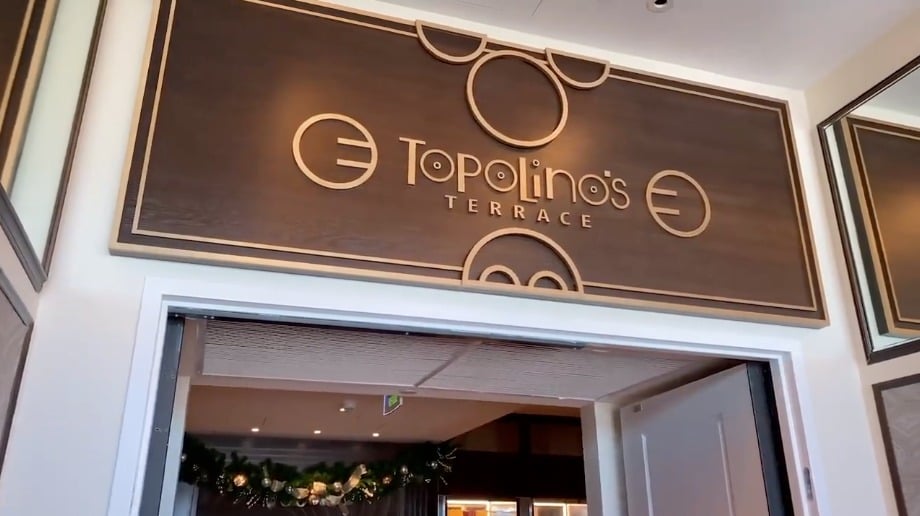 Topolino’s Terrace is the brand new restaurant that is now open on the gorgeous rooftop of Disney’s Riviera Resort. Pete Werner, Craig Williams, Ryan Clavin (Ryno), Sean Faulk, Corey Fiasconaro (Fiasco), and I had the pleasure of taking part in Breakfast à la Art with Mickey & Friends on opening day.

The restaurant is located on the tenth floor and is the only Table Service dining location available at this Resort. It’s also important to note that the restaurant can only be accessed from the West elevators at the Resort.

We were excited as we arrived at the restaurant for its first official breakfast service on the grand opening day. The entire dining room is surrounded by large windows offering expansive views of not only the Resort’s property, but well beyond.

Pluto was out on the patio greeting guests and while we’re not sure that he’ll always be there, it was a fun treat to see him as we weren’t expecting to. The patio has plenty of seating available with small tables for enjoying a cocktail.

Once we were seated, a server came over with a carafe of what he called a passionfruit, orange, and guava juice. We all recognized that familiar blend right away and asked if it was POG; sure enough, it was!

Next, our server came over to take our drink orders and explained that Donald Duck was sculpting our breakfast pastries so they’d be out shortly. Once our drinks arrived, we placed our entree orders. The breakfast service here is a prix fixe meal that includes shared pastries, your choice of entree, juice, and brewed coffee – there is an additional charge if you’d like a press pot. The cost of breakfast is $41 for adults and $24 for children ages 3-9.

I noticed right away that the artsy theme was extended with the tableware. The familiar paintbrush butter knife was on the table and when our pastries were delivered, they were arranged in a ceramic ‘paint bucket’ and served with honey-butter, house-made jam, and chocolate hazelnut spread on the artist’s palette base of the bucket as though they were paints.

The honey-butter was a favorite around the table as it added a touch of sweetness to the delicious croissants and Epi-bread. All of the pastries were delicious and freshly-baked. The seasonal danish we were served was apple and it was phenomenal.

Pete ordered the Wood-Fired Butcher’s Steak and felt that the meal was good but wasn’t sure that it was worth $41 for breakfast despite the novelty of dining with Disney characters.

Sean ordered the Classic Bellini for $13 in addition to his meal and was especially pleased with the bold presence of Prosecco and the large slice of fresh peach that was served as a garnish with the drink.

For his entree, Sean ordered the Smoked Salmon served with an Everything Bagel, tomato, red onion, cream cheese, and capers. While he really enjoyed the Smoked Salmon saying it was excellent, he didn’t realize that it would come with large slices of tomato and thought they’d be diced. Sean and I will have to have a traditional Brooklyn breakfast of bagels and lox together one of these days so I can teach him how it’s done.

Ryno and I both had the Quiche Gruyere that was served with house-made pancetta, roasted potatoes, and field greens tossed with a lemon vinaigrette. While we both really enjoyed our quiche, Ryno added ketchup and hot sauce to his roasted potatoes to kick them up a notch. Neither of us tasted lemon in the lemon vinaigrette which was unfortunate, but the choice of greens used was a good one for certain.

Craig chose the Sour Cream Waffle served with roasted apples, chantilly, orange-maple syrup, and your choice of breakfast meats which he ordered sausage. He described the waffles as extremely basic and said the orange-maple syrup was much too sweet for his liking. Craig thought the character interaction was definitely the stand-out of the meal.

Overall, this Character breakfast was lively and bustling throughout the dining room and it was a lot of fun. I do want to make sure folks know that the atmosphere can be loud and that each character is announced over a PA system as they enter which is also loud. The character interaction here was really fabulous and each one has their own cute little poses making for fun photos. Breakfast was delicious and our group was very impressed by the fact that this was their first official day of operation as it flowed like they’d been doing this for much longer.