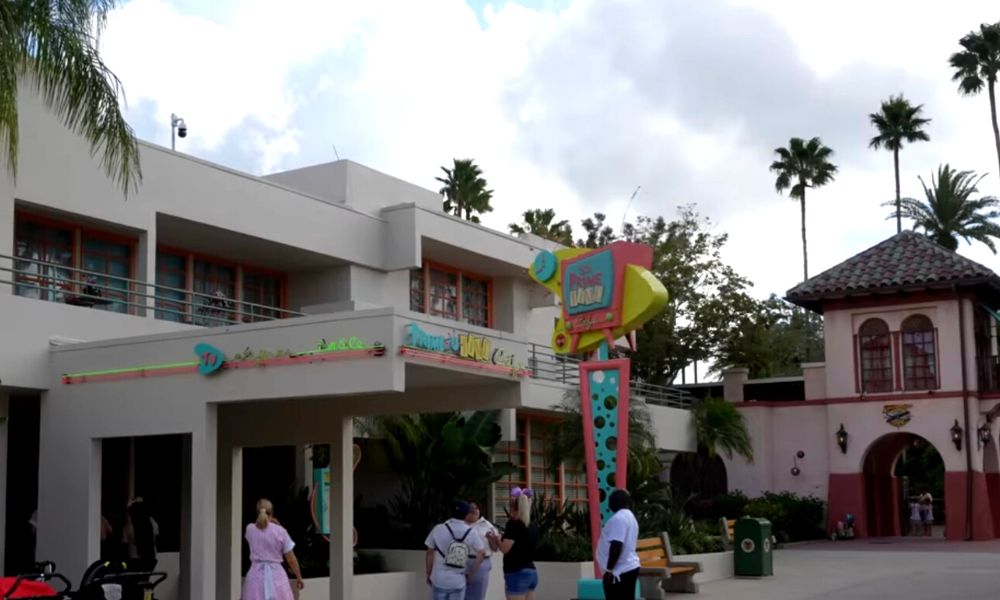 Today we are at Hollywood Studios checking out 50’s Prime Time Cafe. This is somewhere I haven’t been to before, but my mom would always rave about this place. She has the best memories of this restaurant from when she was younger. Knowing all the fun she’s had here made me excited for this review. Before we grab our forks and dive in, let’s see how Disney describes the dining location.

Classic American comfort food,’50s kitsch and a good old-fashioned family gathering take you back to a bygone era.

Disney doesn’t mention that the staff here is nothing like the cast members you see in the parks. This is a themed dining experience, much like Whispering Canyon at Wilderness Lodge. Here they treat you like family. The cast members are your cousins, and they can be sassy. Before they get into their schtick, they ask if you are okay with it. Of course, we said yes. It’s funny and a different experience than you’d get anywhere else at Hollywood Studios, which is why their menu items are pricey. It can get loud, and you might be emotionally drained from the banter by the end of your meal.

Ryno ordered the Deviled Eggs to share with Teresa. He said, “it was okay, but they didn’t wow me,” and that he’s had better but always likes to order deviled eggs if it’s on the menu to try them. Teresa liked them but thought that the jalapeno would have been better if it had been in the egg and not placed on top. The food item’s description says, “Ask your server for today’s selection,” so the type of deviled eggs may vary. These are priced at $11, which I think is a “normal” price.

Teresa got Cousin Amy’s Iceberg Lettuce Wedge which is a plant-based option. On this wedge salad, they have bacon made out of rice paper. Rice Paper Bacon. I tried a piece of this bacon, and it was delicious. It had the crunch that you wish bacon would have. Somehow it had all the right flavors too. It was very interesting, but it tasted great. It was also covered in a plant-based ranch that went perfectly with that crunchy “bacon.” The wedge salad also cost $11, the average Disney appetizer price.

Panda ordered the Beer-battered Onion Rings. Now I am a sucker for onion rings, so I had the tiniest bite ever because I had no idea what was used in the batter, so I didn’t want to get sick because of my allergy. After I took a bite, we both agreed they could’ve been crunchier. They tasted great, but it was missing that texture. It was just a little too mushy for onion rings. This appetizer is priced at $12, which I can only partially agree with. It should’ve been a $10 dish because it’s nothing special.

Overall, the appetizers were okay, nothing special.

Ryno got the Sustainable Verlasso Salmon which was presented nicely, but the meal was just okay. He found a bone in the Salmon, which can happen, but it does bring down the mood of the experience. The potatoes should have been warmer than they were. His potatoes were also different from the others at the table, and he thought the dish could’ve been better with those other potatoes. This dish costs $27, a hefty price for a not-so-good meal.

Teresa got Cousin Megan’s Traditional Meatloaf. She said it was good, but her meatloaf is way better. They did like that it was made with a blend of pork and beef. She enjoyed her mashed potatoes, but she did substitute the green beans for corn. Teresa isn’t a fan of their green beans, but she mentioned that the corn tasted fresh. Overall she said it was a decent meal and that it hadn’t changed since the last time she ordered it. The meatloaf meal cost $23.

I ordered Cousin Harold’s Vegetable Garden, and the price on the menu is listed as Market Price, which was very weird. I concluded that this dish most likely changes based on what they have. The description says, “A Seasonal Alternative with all the Fixings,” so I had many questions. Our service Daniel informed me that it is a pasta dish filled with all types of veggies mixed with a red sauce. There is also an option to add tofu; he described it as “chicken tofu,” meaning its chicken flavors and is cut like chicken strips.

The tofu didn’t have much flavor, but the sauce overpowered anything on the plate. The red sauce was spicy, and I don’t mean Disney spicy; I mean spicy, which I loved. I was surprised to get that much of a kick out of a dish here at Hollywood Studios. That sauce really stood out to me; it made the dish so much better, which led me to rate the meal an 8 out of 10. Later, we found out the price; it was $21 in total.

Panda ordered Aunt Liz’s Golden Fried Chicken which comes with corn and roasted garlic mashed potatoes with chicken gravy. He said, “the chicken was good, but it wasn’t great” and that “it could’ve been more tender.” The skin was very crispy, and it was the part of the chicken with the most flavor. He compared it to Kentucky Fried Chicken, which resembles KFC and should be less than $26. The mashed potatoes were delicious, according to panda, but he wished the gravy was hotter. Just like Teresa, he also thought the corn was fresh.

This type of dining experience isn’t for everyone. All the banter can become draining and seem disruptive. I enjoyed the performative aspect of the restaurant, but I left a bit tired. I had to grab some caffeine after to wake me up. Guests gravitate to this dining location because of the unique theming and because the menu has recognizable food. The food wasn’t the best, though, and it was too expensive for what we got. When I say expensive, I mean per plate, not the grand total. My secret pasta, I think, should’ve been $17, but because of the experience, the food is pricey.

If you enjoy experiences like this, check out Whispering Canyon at Wilderness Lodge because they do something similar. I love Whispering Canyon; the food, atmosphere, and cast members are incredible. Speaking of cast members, I want to shout out to our server, Cousin Daniel. He never broke character, he kept us laughing the entire time, and you can tell he loves his job.

Have you ever been to the 50’s Prime Time Cafe? If so, let us know about your experience. We’d love to read all about it! Tell us your story in the comments below.