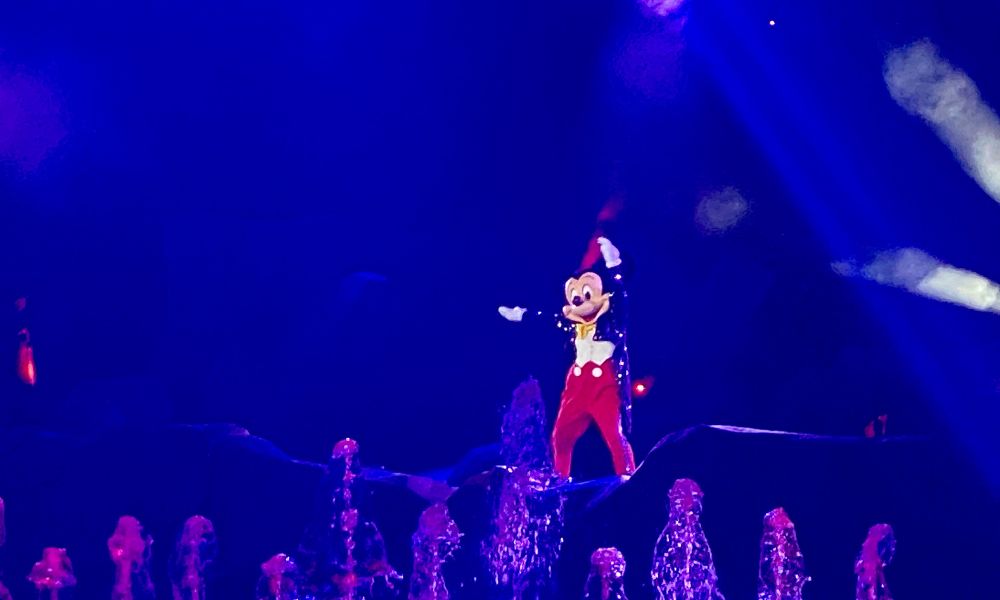 The long-awaited return of Fantasmic! is finally here. I can’t believe it! I have been waiting forever for this show to come back. I have always loved this show; it’s one of those shows that fills my heart with joy and nostalgia. It’s important to note that changes have been made to the show, so it won’t be the same show it used to be, but from what I have heard from the cast member previews is that it’s even better. I have even heard bold statements like “it’s better than the one at Disneyland,” which surprises me because EVERYONE says that Disneyland’s version is the best. Anyway, let’s get into what you need to know.

Opening night show times were 8 pm and 9:30 pm. I went to the 8 pm performance because let’s be honest, 9:30 pm is just a little too late for me these days. I got to Hollywood Studios at around 4:30 pm, and guests were already camping out. At 5:30, a line started to form on Sunset Blvd. When I hopped in line, it was already by Starbucks. As I stood there, I wondered if and when they will offer Lighting Lanes for guests willing to pay to see the show. I’ll be completely transparent; I would pay for Disney Genie+ if I could get priority seating for nighttime shows.

The best thing you could do is get there early; I know it cuts time to ride attractions or experience different park areas. Get someone in your group willing to wait and hold down the fort while everyone else experiences one last thing before the show. When we were let out of the show, the line for the second showing was already by the park entrance. Whichever showing you pick, get in line early. I got fortunate and ended up in the center section’s second row, but started to wait in line at 5:30 pm. By 6:15 cast members started ushering guests into the theatre, and by 6:30 I was seated.

The show and the changes

Enough about camping out; let’s talk about the show. The pre-show music is a fan favorite, and I was worried they might change it. Nope, it is still the Disney Mania music we know and love. It felt great to be back in that amphitheater and see that incredible mountain. Disney gave us heads-up on what would be changing in the show, so I came into this with an idea of what it would be like. The new section featuring Aladdin, Elsa, Mulan, Pocahontas, and Moana was incredible. I think that unit was very powerful with the effects and the choreography. The new Elsa section where she performs ‘Show Yourself’ was emotional yet empowering. I have a soft spot for Elsa, so of course, I cried.

I don’t want to spoil too much, but the Moana section was out of this world. I hate that we didn’t get an updated Maleficent dragon; it’s still a crane. I also know many Disney fans wanted them to get a new boat for the ending sequence, but we did not get that, but it does look like it got repainted recently. They definitely upgraded their lights and lasers because everything seemed very vibrant and crisp.

As I mentioned, I was in the second row; beware, it is a splash zone. At one point, I said, “Well, the water works if anyone is wondering.” The water was intense, and it affected the quality of my photos; it was still a great time, though. Especially since it was a hot day. I’m sure on a chilly night, that won’t be fun to experience.

If you are a Disney fan or Disney movie fan, you have to come to watch this updated version of Fantasmic!. It still has all the moments we loved before, but the changes make an incredible impact. Those enhancements were a positive thing, but part of me wishes that section was longer. It felt a little rushed. I hope to see more positive changes like this as nighttime shows get redone and as new spectaculars are brought in. As I always say, I only enjoy nighttime entertainment that brings me to tears or fills me with emotion, and this show did just that. The show is fantastic but remember to get a good seat you’ll have to wait in a massive line.

Not sure how long the hype will last, but it should slow down in a few months, so maybe the lines will start to settle down in the new year. Grab a snack and your favorite drink and enjoy the view of Sunset Blvd while you wait to see this spectacular show.

All in all, Fantasmic! is excellent, and it’s great to have this back in Hollywood Studios. This show will give guests something to look forward to in the evening as they venture through the park. If you have a ticket that allows for park hopping, I think it is worth using to see this show. I could go on forever, so I will cut myself off here, but if you take anything away from this article, let it be that you need to watch this show on your next trip.

Oh, one last thing. I want to give a massive shout-out to the cast and crew of Fantasmic! they have worked incredibly hard to get this show back up and running. Thank you for bringing the magic of this show back to Hollywood Studios.