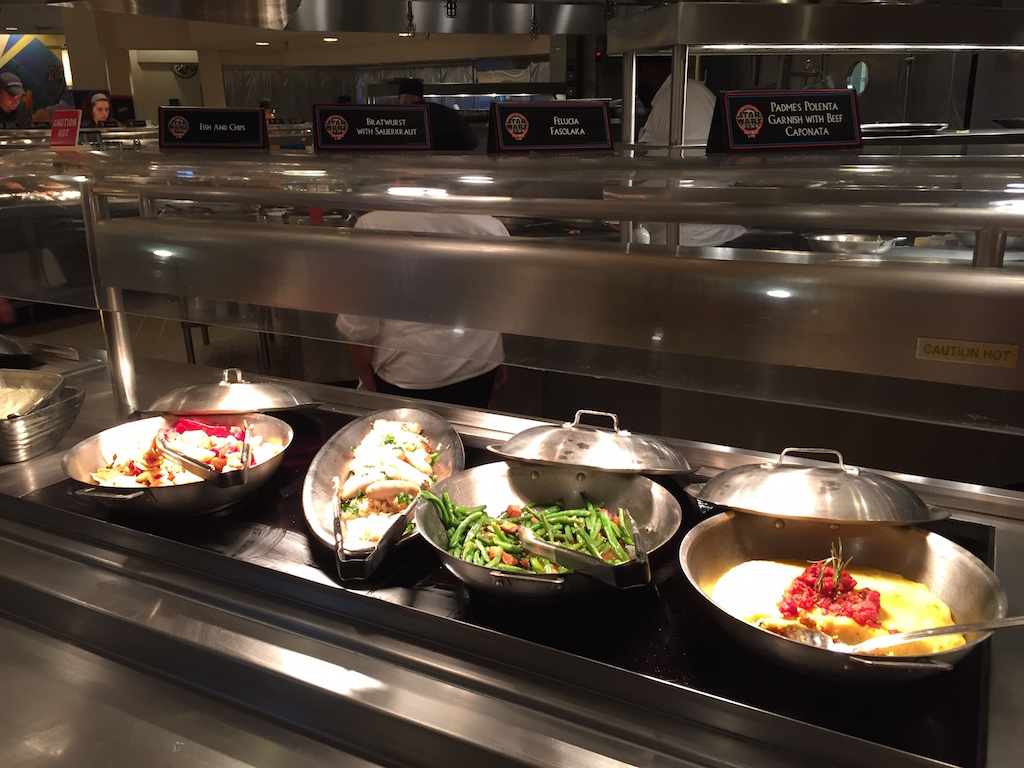 With Star Wars Weekends coming to a close at Disney’s Hollywood Studios, I thought I’d give you a review of our experience at the Jedi Mickey’s Star Wars Dine dinner. Hopefully this will help you as you look forward to and start planning for any trips to next year’s event. This dinner is held at Hollywood and Vine Restaurant and is a dinner buffet featuring Mickey, Minnie, Goofy, Donald, Chip and Dale all dressed as Star Wars characters. My husband and sons are huge Star Wars fans, so we thought it would be a great way to meet all of those characters in one place without having to find each of them around the park at various times. The dinner did accomplish this goal, albeit in a somewhat stressful way.

My traveling party was my husband, our 9- and 7-year old sons, our almost 4-year-old daughter and myself. We had a 5:45 reservation and we showed up a few minutes early. We had to wait 5 or 10 minutes to be called, at which time we were directed to stand in another line. While in that line, we were told that there was a photo op with Jedi Mickey right inside the door and that no characters would be signing autographs, but instead, we would get a pre-signed postcard. When our time came, we were ushered inside the door quickly, where we took our photo with Jedi Mickey. There was a PhotoPass photographer there and they were also willing to take a photo with our camera. We were then given our “autographed” postcard and shown to our table. Here’s where it got chaotic and stressful (and we’ll admit, part of this may just be due to the timing of when we got seated and the fact that we were eating at peak dinner time). Before we’d even had a chance to get situated in our seats, Darth Goofy was at our table for a picture. I checked the time stamps on my photos and there were only 6 minutes from the time of our Jedi Mickey picture until our photo with Goofy and in that time, we had to be seated, order drinks, make lightsabers (the kids each got placemats to roll up into lightsabers) and get our cameras out of the bag. We’ve done many, many character meals and our kids like to have fun with the characters. They love doing these meals and often like to do a silly picture or to talk to the character. Darth Goofy walked up and literally motioned with his hand for them to come and was immediately posed for a photo. We had time to take one photo before he was on his way. The photo did turn out cute, because the kids grabbed their lightsabers and were ready to fight him, plus we got a photobomb from Chip. This was not enough time to get us and 3 children over to a buffet and back to our seats without missing a character meeting. We didn’t get our first plates of food until almost an hour after our reservation time. The characters seemed rushed and were only at our table for a very brief time. The exception was Stormtrooper Donald, who did play along with the kids and their lightsabers. We did end up getting some great photos of the kids with the characters, which is what we ultimately wanted, but we didn’t have time to get in any of the photos ourselves. The characters just weren’t at our table long enough for us to get up and join in.

On to the food – The food I had was very good, but the buffet consisted of an interesting mix of choices and I tend to stay on the tamer side of things, so I can’t speak for a lot of it. There were a couple types of rolls, lettuce salads and soups, plus vegetable salads and shrimp for starters. The next section held fried rice, orange chicken, sweet and sour pork, salmon and sautéed vegetables. Then you move on to polenta with beef, green beans, bratwurst with sauerkraut, fish and chips, corn, meatballs and another variety of fish. A carving station is available with 2 kinds of meat to choose from. Many of the selections had Star Wars-themed names, such as “Tusken Raider Thai Beef Salad” or “Darth Vader’s Vegetable Soup.” But then there were several that were just the name of the food, like “Fish and Chips” and “Salmon.” It was like they ran out of clever titles for everything. Kids have their own “Padawan Kids Buffet,” with more kid-friendly items such as broccoli, chicken nuggets, mac ‘n’ cheese, tater tots and corn dog nuggets. My older son has a couple of food intolerances, so we did ask to speak to a chef. Chef Angel was very helpful and accommodating, but the issue that we did come across was that much of the food was actually not made on site, so he wasn’t able to tell us all of the ingredients and guarantee that it was safe. We did not have this same issue the rest of the week, so it must just be a problem at this restaurant. Because of this, he was willing to make separate dishes for him, such as allergy-friendly chicken tenders and corn. He did bring Jacob a brownie made of brown rice and applesauce (tasty, but the description sure doesn’t sound appealing to a 9-year-old!) and a bowl of Tofutti ice cream that was very good. The real star of the meal was the dessert buffet. Everything was Star Wars-themed and very tasty. My favorite was probably the cupcakes. There were Yoda, Darth Vader and Jabba the Hut varieties, all different flavors, like salted caramel and peanut butter. There was even a chocolate fountain where chocolate-dipped desserts were being made. Our kids loved getting to watch their favorite treat, the chocolate-covered marshmallows, being made. The meal ended up lasting just over 2 hours, since we didn’t even start eating until an hour in. We were on the Disney Dining Plan, so used 2 table service credits to book the dinner, but the total for the 5 of us would have been $235.32, plus tip, if we had paid out of pocket. Overall, would we recommend the Jedi Mickey Dinner? It really depends on what you consider a value for your family. Two of our kids each ate one chicken nugget, one bite of macaroni and two marshmallows. My husband only had time for one trip to the buffet and he’s diabetic, so can’t really indulge in the desserts. We obviously didn’t get our money’s worth of food. But, we were able to get all those character photos without having to stand in several lines around the park, so for us the experience was worthwhile.  The timing of those characters coming to our table, combined with getting all of us up to the buffet was stressful, but we were there during a week of extreme heat, so getting to meet everyone in the air conditioning was great.  I’m glad that we did the dinner once to experience it, but once is probably enough for us.