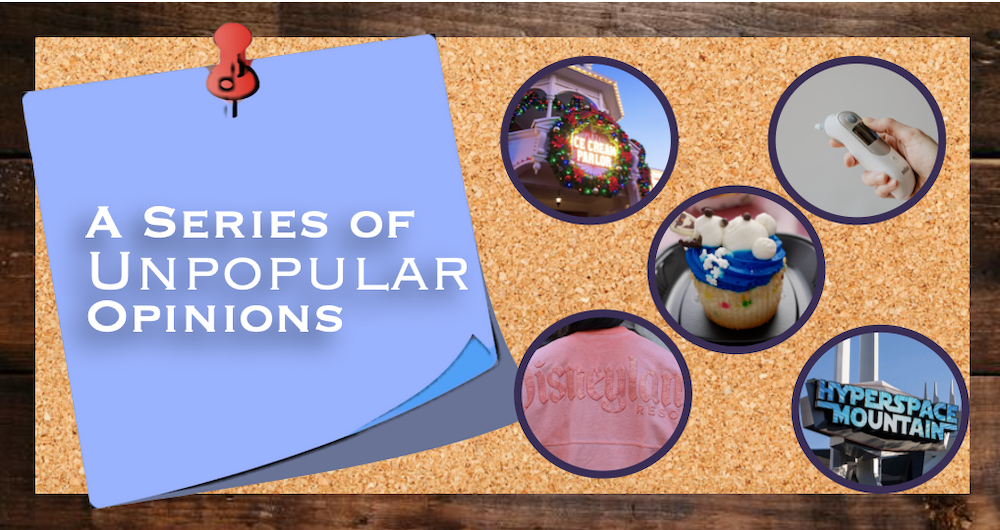 As Halloween has passed and we are headed into an unusual version of the holidays, I thought it might be time to stir up some conversations around a few of the unpopular opinions we hold secretly in the darkness of our minds.

You may have caught Part One of this series back in September where I took a controversial stance on Figment, popcorn buckets, the Tiki Room, the Jungle Cruise, and the monorail. Today, we are going to continue that theme with another five unpopular opinions that I have kept quiet about all these years.

I do not like the Star Wars overlay on Disneyland’s Space Mountain.

Like seriously, when I am there and it is in place, I am actively disappointed. Space Mountain is not a Star Wars ride, and other than they share a generic theming of space in general, they should not be linked in any other way.

If I had things my way, we would be going back to the Dick Dale soundtrack and soaring through space listening to surf-inspired sci-fi music, just the way it should be.

Hyperspace Mountain: Not. Into. It.

Disney makes a lot of different merch; you know this because we recap it each week on the Monday Merch Meeting. But one thing that I have never quite gotten around to buying is the good old spirit jersey.

I want one; that isn’t the problem. It’s that every time I go and try one on, it looks like I am wearing some sort of pastel-colored tent. They would have to be the least flattering thing that Disney makes, and although some of you can pull them off really well, I’m just not making it work.

I know the problem is me. I have curves and all the things that make it difficult to find a size of anything that fits you properly in all the right places. But at the same time, I think that surely there has to be a better fitting option for women to still wear these super cute tops without feeling like a frumpy sack of potatoes?

All Disney cupcakes are disappointing.

Disney baked goods make for the cutest and most delicious-looking things I have ever seen. Most look so decadent that you can’t wait to sink your teeth into them, with many of them able to carry that anticipation all the way through to satisfaction. However, rarely do I find that any of the tantalizing-sounding cupcakes being offered taste anything more than, well, ordinary.

When you break them down, Disney cupcakes are outstanding in presentation and lacking in flavor with most boasting a tasteless, colored buttercream to exhibit those innovative designs that capture our attention.

When finished, I am left with little more than food coloring-stained fingers and regret for the calories and money wasted. Always stick to the churros…

I like the idea of temperature checks at Disney.

*Originally posted November 4, 2020. Many of the precautions in place at the Disney parks are things we can’t wait to see the end of, masks being the prime example. As I have said before, though I am fully in support of them, no one is wearing them because they like it. But there is one new aspect of attending the parks that I can’t say I am against on a permanent basis: temperature checks.

If you are unwell, you shouldn’t be attending the parks, no matter what is bringing you down. Although very disappointing for you, it is not fair to take a potentially contagious illness into the crowds of unsuspecting people. Temperature checks might be a great way to reduce the spread of all illnesses in theme parks on a regular basis. One that might even stop you from getting that cold in the first place!

If you are dealing with a non-contagious illness that creates higher temperatures, perhaps a quick doctor’s note brought along with you would allow an exemption. I’m not sure how it would all work out, though I am certain that encouraging people to take a day off for rest might not only improve their chances of returning to the park prior to the end of the trip, but also make it safer for everyone visiting.

I love that the holiday festivities start early and finish late.

I know, this is a subject that you’re either on one side of the fence on or the other; a greater divide than politics at times. You either appreciate the long-running seasonal decorations or resent them for starting too early and finishing too late.

As a local, I might have a different perspective, however, as an international visitor, with different school terms, seasons, and schedules, I am of the belief that if the holiday decorations were only there for the 4 -5 weeks surrounding Christmas, I might have never actually seen them myself.

Having decorations, spirited festivities, and special activities for a longer period really does allow greater opportunity for those of us who aren’t local to enjoy them at times where we can manage, and afford, to go.

That will do it for this installment of A Series of Unpopular Opinions. Hit me with your feelings, thoughts, and unpopular opinions of your own down below!