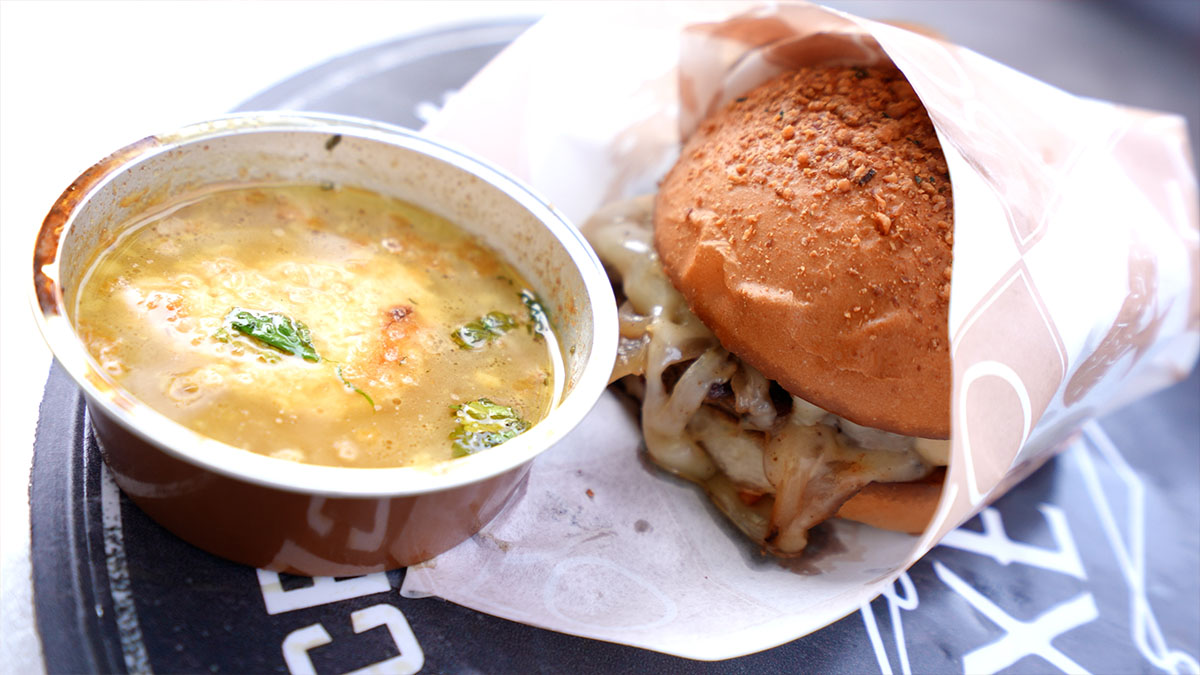 This week for our featured Disney Dining Review, we headed to Disney Springs. Our podcast audience requested we try the French Onion Soup Burger at D-Luxe Burger, and we couldn’t possibly say no. Burgers sometimes demand a dessert, so we finished our meal with ice cream from Salt & Straw. Here’s what we thought!

D-Luxe Burger generally has good hamburger patties, sometimes not seasoned well. With a burger like this, it is negligible. The flavor came primarily from the onions and cheese. The Herb Parmesan mixture on top of the Parker House Roll increased the level of salt, but also added a pleasant difference in texture from the rest of the sandwich. Notes of rosemary were present in most bites of the burger.

The dipping sauce is fine but inconsistent. It’s essentially flavored broth with gruyere, but the cheese sits on top, similar to French Onion Soup. If it was blended together, it might make more sense as a dip, but they could’ve left the cheese out since you couldn’t really get any of it on the burger when dipped.

Salt & Straw’s January specialty flavors are part of their Dairy-Free Decadence Series. This includes Bananas Foster, Chocolate Sorbet, Toasted Oat Milk & Cookies, Peanut Butter Brittle Caramel Fudge, and Red Velvet Cake w/ Cream Cheese Frosting. Salt & Straw allows you to sample as many flavors as you’d like, so we were able to try all of them except the Bananas Fosters, which was out.

The Red Velvet Cake was the weakest, in my opinion. The coconut ice cream overshadowed the red velvet and cream cheese flavors and didn’t pair well together. The Peanut Butter Brittle Caramel Fudge also featured coconut ice cream, but the vanilla flavoring and the ridiculous amount of peanut butter brittle and caramel came through the most for an even balance of salty and sweet.

The Toasted Oat Milk & Cookies mimicked the true taste of an oatmeal chocolate chip cookie with a slight hint of cinnamon. The chunks of chocolate ganache weren’t large enough to throw off the texture, and overall it felt like a take on cookie dough ice cream. The Chocolate Sorbet was decadent at its best. The chocolate flavor is nearly overwhelming, but flaky salt reigns in the taste for another perfect balance of salty and sweet.

We also had some of Dwanta’s Teremana Spiked Eggnog ice cream left over from the holiday season. Eggnog might not be the most popular beverage, but it sure does work well as ice cream. The tequila, made by Dwayne “The Rock” Johnson is very present in the ice cream, but it is burned off, so you get the flavor, and all ages can enjoy it.

You can never go wrong with a burger and ice cream at Walt Disney World and we had a winning combination with D-Luxe Burger and Salt & Straw. Let us know what else you’d like us to try!