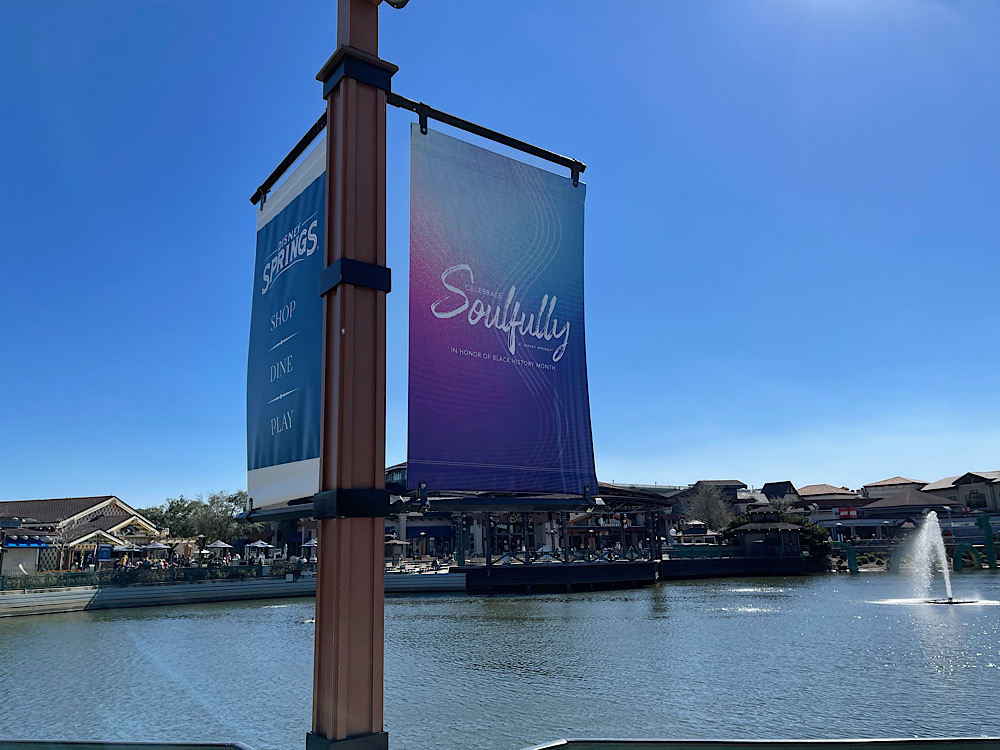 We’ve seen it all at Disney Springs as far as special emphasis events are concerned, and, to be honest, I’ve enjoyed them all thus far. From WonderFall of Flavors to the Christmas Tree Trail and its modified scavenger hunt, there’s always something fun to do and see. And with each event, we’ve had a brochure or checklist or something that we as guests could use to navigate the offerings while at Disney Springs.

As was announced twice via the Disney Parks Blog, February 1st saw the beginning of Disney Springs’ Black History Month event called Celebrate Soulfully. It was announced that four art installations would be part of the event, and special musical guests highlighting specific musical genres that celebrate Black culture would perform on certain evenings. Special food would also be offered during the month. Sounds great, right?

I arrived at Disney Springs today expecting to see a display in a central flower bed drawing guests’ attention to the event. There were no displays in any of the spots that we’ve seen them in the past. I am all for cutting slack during the pandemic (I certainly need slack these days myself), but we’ve seen special, elaborate displays in the central flower beds as recently as Christmas. It can be done, and, for Celebrate Soulfully, it wasn’t. While there are Celebrate Soulfully banners hanging on the light poles along the waterfront, they are in no way front and center.

I spent a good chunk of the afternoon walking all over Disney Springs trying to find the different art installations. Unfortunately, a brochure that would help guests locate all of the event’s special features has not been created. Glossy brochures have been made for scavenger hunts and autumnal snack checklists in the past, but nothing has been created for the Black History Month event that began on Monday.

As I hunted around the complex looking for the event’s special elements, I did refer to the Disney Parks Blog pieces, which did help me locate the three displays highlighting Disney animators in Art of Disney. I was happy to check out the Artist Spotlights and to see that artwork for three of the films that the animators, including Disney Legend Floyd Norman, had worked on was gathered around the informational displays. But if you didn’t check online or happen to stroll into Art of Disney, you’d never know that the displays were there.

Three of the four art installations created for the event are found on storefronts of shops that have, unfortunately, recently closed. Two of the displays, one by Bianca Pastel, and another by Arrington Porter, are found at the location that used to house Kipling in the Town Center section. Another Soul-inspired art installation, by Cory Van Lew, is around the corner where Kiehl’s used to reside.

The fourth, by Bee Harris, can be found on the Lego Store wall that faces World of Disney. It was very frustrating trying to find them all without much of a clue as to where they’d be (except for the Lego one), and I’d like to give a huge shout out to the cast members who helped me out.

As mentioned in the most recent Disney Parks Blog piece, Amorette’s Patisserie is featuring two of their petit cakes for the event, one inspired by Disney and Pixar’s Soul and another featuring Princess Tiana. The cakes, like all of Amorette’s petit cakes, are $20 a piece. If you know me, you know that I’m one for enjoying sweets, but dropping $20 for a very small cake is not something that I want to do. In my mind, additional, less-expensive treats and culinary delights that celebrate Black heritage could have been featured. There should be something for everyone and every price point in a similar fashion to what we’ve seen at Disney Springs in the past. And, if we’re going to have a variety of snacks to try, a checklist for guests to refer to would be great. Again, it can be done.

In the evening, as announced, musicians will be featured on both the Waterfront Stage (Marketplace) and Waterview Stage (The Landing). Unfortunately, a schedule for the performances has not been released, and while I know that this isn’t necessarily normally done for entertainment on the two stages, I feel that it would be a great thing for this event so that guests could know ahead of time who is performing where. As a side note, I do appreciate the addition of the occasional jazz song that’s been dropped into the background music loops played in the different Disney Springs neighborhoods. That’s a nice touch.

All in all, while I feel that Disney hits it out of the park on so many things, I can’t help but feel disappointed at the effort that was (or wasn’t) made for Celebrate Soulfully. No displays, no actual on-the-ground fanfare, no event promotional material to help guests interact with the elements that are available. My afternoon trying to hunt down and enjoy all of the features that sounded so good when they were announced has left me feeling anything but celebratory. It’s left me feeling sad. And angry.

Maybe event brochures are coming. Perhaps there’ll be a display in the flower bed by the Orange garage tomorrow morning. Perhaps. Maybe. But, again, the event began on Monday. And Black History Month deserves more.

UPDATE 2/4/21: Today, a day after I wrote the article above, a Celebrate Soulfully at Disney Springs section was added to the My Disney Experience app. At this time, the event section does not contain many details, but seeing that a step has been made is somewhat encouraging.

One additional Celebrate Soulfully snack is found in the new section on the app: a Mardi Gras-inspired Smoked Crawdog. The crawdog will be available at B.B.Wolf’s Sausage Company.