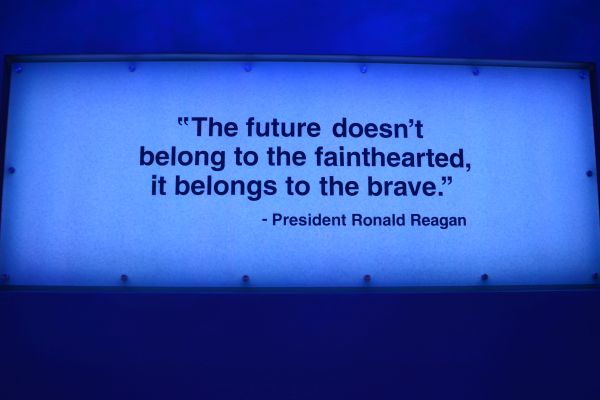 ShareTweetSubscribe
A new exhibit recently opened at the Kennedy Space Center Visitor Complex to honor the fallen astronauts and pays tribute to the orbiters Challenger and Columbia. The families of these fallen heroes, along with NASA, helped to create this permanent display. This exhibit is located in the new Space Shuttle Atlantis building at the Kennedy Space Center Visitor Complex. It is about 60 miles from Walt Disney World and an easy drive to the coast down 528 (The Beachline.) The Visitor Complex opens at 9 AM daily, with tours starting at 10 AM. A ticket is required and they charge for parking. Be sure to bring some quarters for the tolls.

If you followed the Space Program as I have for many years you will find this a very moving experience. “The crews of Challenger and Columbia are forever a part of a story that is ongoing,” NASA Administrator Charles Bolden said. “It is the story of humankind’s evolving journey into space, the unknown, and the outer-reaches of knowledge, discovery and possibility. It is a story of hope.”

It was on January 28, 1986 when Challenger STS-51L  launched and just 1 minute and 13  seconds later there was a booster failure and explosion. Commander Francis Scobee, Pilot Michael J. Smith, Mission Specialists Judith Resnik, Ellison Onizuka and Ronald McNair and Payload Specialists Gregory Jarvis and Christa McAuliffe, a teacher from New Hampshire were killed. I can remember clearly watching it on TV that day and it made me realize just how dangerous exploring Space can be. February 1, 2003 is when the crew of Columbia STS-107 was lost. The orbiter broke apart over Texas as it was reentering Earth's atmosphere for a landing in Florida.  We lost Commander Rick Husband, Pilot Willie McCool, Payload Commander Michael Anderson, Mission Specialists Kalpana Chawla, David Brown, and Laurel Clark, and Payload Specialist Ilan Ramon, who was Israel's first astronaut. I can remember that day clearly as well, I was getting ready to fly to Orlando to visit Walt Disney World and the Kennedy Space Center. By the time we landed in Orlando we heard the news that the 7 astronauts had perished that day. Visiting this exhibit was a very moving experience for me. It has the same effect for me as visiting the Vietnam Memorial in Washington DC. Each case has items from each astronaut that was important to them.  After you explore this area, be sure to turn right to see a recovered part of the fuselage from Challenger and the windows from Columbia. I found myself wondering what were they doing in the seconds before the explosion. It just sort of takes your breath away when you see these pieces. I have been fortunate to see intact orbiters and you almost can't fathom the forces that must have been involved when you look at the wreckage. Could I ask a favor of parents? Please don't let your children run around in this area. I saw a number of parents who just let their kids run through here as if it were a playground. This exhibit honors our fallen astronauts and it should be treated as a monument to these brave men and women. If you are in the Orlando area, I highly suggest you visit this exhibit. 'Til next time, See you in the parks!