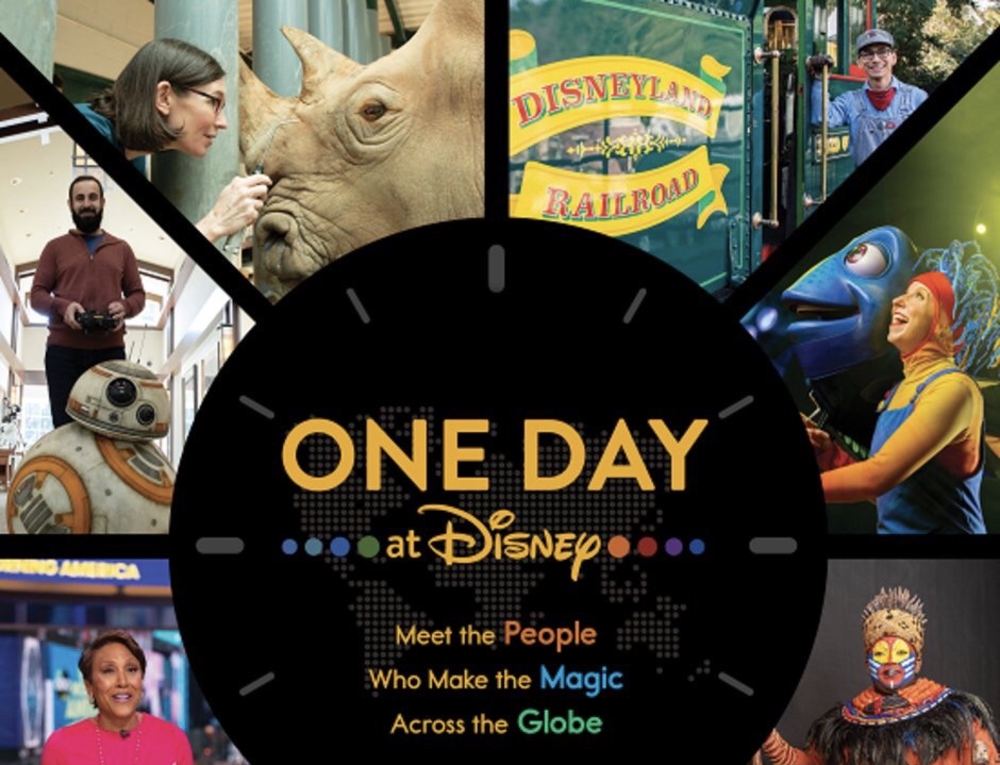 On February 21, 2019, camera crews dispersed virtually all across The Walt Disney Company on a secret project. No one knew anything about it until August 1, when Disney added a cryptic event to its D23 Expo schedule: “Secret Walt Disney Company Project.”

After making Disney fans crazy with theories and speculation, on August 22, Disney finally announced the secret project. It was a book and documentary about their cast members entitled, One Day at Disney.

The feature length documentary and accompanying book, One Day at Disney: Meet the People Who Make the Magic Across the Globe launched on December 3, 2019. The documentary and 52 additional short segments premiered on Disney+.

“One Day at Disney: Meet the People Who Make the Magic Across the Globe” is a gorgeous 224-page coffee table book written by Bruce C. Steele.

According to the press notes, “… a small army of photographers and videographers scattered across the globe to capture what goes on beyond those tantalizing “Cast Members Only” doors … All the photos in this book were taken on that single Thursday (February 21), beginning early in Tokyo and following the sun around the world through Shanghai, Hong Kong, Paris, Madrid, the Bahamas, Costa Rica, and dozens of places throughout the United States. More than 40 hours after it began, the day ended as the sun set on the Aulani resort in Hawaii.”

The book features full-color photographs and stories from some 80 cast members from a wide array of disciplines in the company. According to Wendy Lefkon, editorial director, cast members were chosen by suggestions from each of the company’s divisions. She said the criteria was that the job had to be “visually interesting” and “distinctly Disney.”

In an interview with The Disney Blog, Steele said, “Interviewing every cast member was fun, and every discussion was different, but it was even more exciting to get to meet them in person, where they work. It’s one thing to hear about how Disneyland Railroad engineers do their jobs, but it’s quite another to ride with engineer Mark Gonzales in the private Lilly Bell railroad car and hear firsthand about the railroad’s history. Or to go backstage with actor Katie Whetsell at Finding Nemo: The Musical at Walt Disney World and walk among the sets and props and hold Katie’s Dory puppet in your hands. I got to have a lot of those kinds of once-in-a-lifetime moments as part of this project.”

I loved every interview in this book. Although it was interesting to see what goes into someone like Bob Iger, Robin Roberts, David Muir, or John Favreau’s day, learning about those who are non-celebrities was far more interesting. I loved reading about Stephanie Carroll’s day as a ranch hand at Walt Disney World, Morgan Pope and his work on Stuntronics, the flying robot technology Disney has been working on, Steve Sligh, the senior manager at Disney’s Golden Oak Ranch, their film production ranch 30 miles north of Burbank, Amanda Lauder, chef chocolatier at The Ganachery at Disney Springs, and many others.

The book is a terrific read, and definitely one that can be read over and over again. It’s great to see Disney highlighting the many men and women who bring that Disney magic, and keep it alive 24-hours a day, 7-days a week for all of us.

ONE DAY AT DISNEY
Meet the People Who Make the Magic Across the Globe
By: Bruce C. Steele
Pages: 224. Disney Editions. $50.00