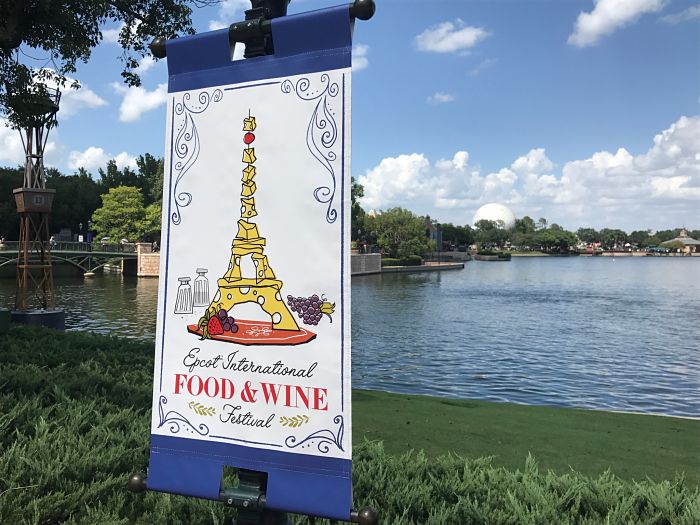 Ready or not, the Epcot International Food & Wine Festival is back! That’s right, the tremendously popular festival started today August 31, 2017! The festival runs until November 13, 2017, which makes this event a record 75 days long! If you’ve never experienced the Epcot International Food & Wine Festival, it’s an annual tradition that allows guests to sample food, wine, and beverages from around the globe. As the DIS does every year, we were there for the first day of the festival. The Food has always, and probably will always be my favorite part of the festival. Being able to sample unique foods from around the globe takes me out of my comfort zone. The festival really allows me to try things I wouldn’t have ever had the courage to try at a sit-down restaurant, but at the Food & Wine Festival, I have no qualms with spending $4-$8 on something just to see what I think of it.

As always, the food was delicious. This year I really felt fortunate to have a perfectly prepared “Le Cellier” Wild Mushroom Beef Filet Mignon with Truffle-Butter Sauce. For $8.00, this dish is on the higher end in terms of cost, but I can never resist from getting it. In years past, I’ve gotten either a bad cut or they cooked it way over done. This year, it was cooked perfectly and I couldn’t have been happier.

As much as I love the Filet Mignon, that is old news…my favorite new dish to the festival (so far…I haven’t tried everything already) this year was from the Thailand Global Marketplace. The dish was the Marinated Chicken with Peanut Sauce and Stir-fried Vegetables. It was a fairly large portion, the chicken was tender and moist and the stir-fried vegetables complimented the chicken perfectly. The peanut sauce drizzled on top took this dish to another level of deliciousness. There were a few disappointing dishes like in the Light Lab inside Innoventions. There was a limited edition Glownut, a donut that was marketed as being glow-in-the-dark, but to me, it was just a vanilla donut under a blacklight, which seemed like a cheap trick. I’m not sure why I was expecting more, but that is what Disney can do to you I guess. Obviously, a big portion of the Food & Wine Festival is the wine and other alcoholic beverages. These are typically fairly small pours, but the upside to that is that it allows you to sample a lot of liquor without getting too sloppy.

I’m not a big wine drinker, but I do enjoy a nice cold beer. So far, I haven’t found anything that I’m in love with. I did try the New Belgium Fat Tire White Ale, which was delicious, but tasted to me like a Blue Moon without the Orange. I know a Blue Moon is a Belgium-style beer as well, but I was just expecting more from a craft beer than something I can pick up at a 7-Eleven. This is coming from someone who isn’t a beer expert though, so feel free to skip my advice when it comes to beer. In my opinion, the Epcot International Food & Wine Festival is the most wonderful time of the year. The park comes alive and the global marketplaces bring something special that everyone from annual pass holders to first-time visitors will recognize as special. Unfortunately, all the excitement does draw in massive crowds. I highly suggest getting to Epcot early, and to start enjoying the festival the minute the World Showcase opens at 11 a.m. because later in the day the lines at the global marketplaces get long. The first day was awfully hot and humid. With highs in the mid-90s, it was difficult to fully experience and enjoy the festival, but as the days go by and the temperatures fall, I am going to get more excited to spend my time in Epcot!