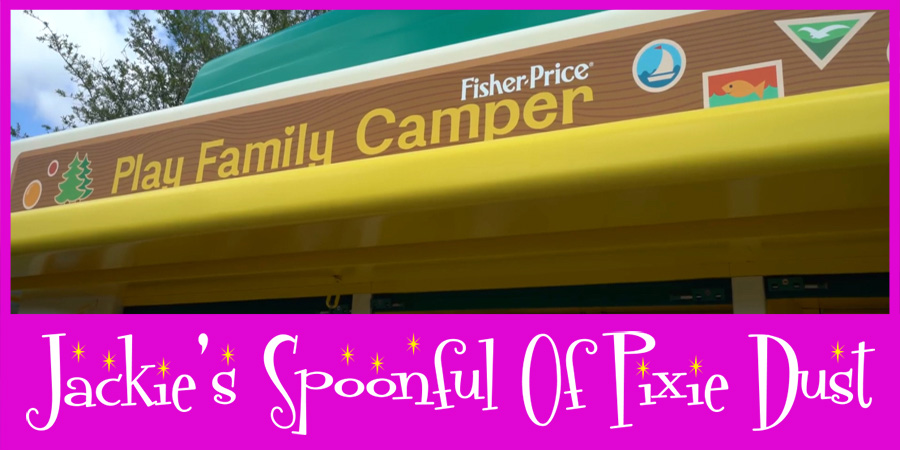 Now that the brand new Toy Story Land has been open for over a week, I thought we’d take a deeper dive into some of the details I’ve noticed in the colorful area. Full disclosure that I have not been to Toy Story Land just yet, so I’m sure I’ll notice many more details once I’ve laid eyes on it in-person, but here is a rundown of what I’ve seen online so far that really makes me nostalgic for my childhood playtime.

Can we talk about the Fisher-Price Play Family Camper above? I actually had one of those when I was a kid and I have to say that it’s pretty cool to see a gigantic one inside the land that’s full of cute Toy Story Land merchandise. I used to spend hours playing with that camper and the little people it came with.

As a kid, I never went to daycare, but I did go over to different babysitters’ houses after school over the years; many of whom had children of their own. One family, in particular, had two boys and one girl, so, lots and lots of toys existed in their playroom. I want to say that I was around six or seven at the time. The boys had approximately half-a-ton (exaggerating, but only a little) of the little green army men and we used to have the best time playing with them along with Barbie dolls. When I first saw a green army man character at Disney’s Hollywood Studios, one of the details I noticed right away was fascinating to me. You know how they’re made in a mold, right? So, the actual toys always look like they’ve been popped out of the mold but there is a line of extra plastic all the way around the edges like they didn’t cut it all off or maybe they put too much of the green stuff in the mold so it leaked outside around the sides. Sometimes I would sit there and pick at that edge because, for whatever reason, I wanted them to be clean cut with no extras; kind of like the leftovers when you tear a page out of a spiral notebook and leave that drama along the side – you know what I mean (if you don’t, just look at this note below real quick!). Anyway, as an adult seeing that the little bit of extra plastic was included in not only the costumes but now in the toys that you see around Toy Story Land, makes me happy and feeling that they are indeed supposed to be there. It makes me all warm and fuzzy when Imagineers include these details that we’ve all come to expect from Disney. Another game I used to play all the time as a kid was Cootie. From the bugs’ legs that could be kind of tricky for little fingers to fit into the holes if you didn’t line them up just right to the swirly tongues, it was such a classic. I remember making our own rules sometimes and mixing up the multiple colored body parts. This giant box is exactly like the one I remember! And, would you just look at that gigantic number two Ticonderoga pencil? Who had a million of those growing up? Do you see how the eraser at the top has even been used a little? Love it! I think this little area in the photo below with the two Cootie bugs, Tinker Toy can, set of dice, K’nex, all those blocks (two different kinds, even!), and Christmas lights overhead like the ones I had on my Christmas tree growing up is going to be a favorite place to take photos. That’s a whole lot of fun in one little place. The next thing I want to talk about is the official snack sponsor of Toy Story Land, Babybel. The Mini-Babybel was “born” in 1977 and they have only become increasingly popular over the years. They’ve got quite a few things going for them. First, they’re small, cute, just the right size for a little snack, and about the same size as a green army man toy. They’re self-contained and super easy to just toss one or two in your bag on the way out the door. I love how the cheeses were cut in half after the red wax coating was peeled and they were made into seats at the table with what appear to be board game pieces and cardboard box cut-outs and toothpicks. The fact that you can see the actual ‘cheese’ inside makes me remember how much fun it was to peel the wax off and expose that yummy goodness. Do you see how the table-top is a note written by Andy’s mom on a torn piece of looseleaf notebook paper? I love it so much, especially because it says, “You’re my favorite deputy!” just like in the movie! Did your mom ever slip notes into your lunch box when you were a kid? Speaking of the red wax coating, I have a feeling that when I see the Mini Babybel in this photo below, I’m going to want to try to peel it the rest of the way off. Of course, I would never really do that, but let’s just say that it’s a good thing that it’s likely too high for me to reach. Last, but certainly not least, let’s talk about Woody’s Lunch Box. The actual building, if you can even call it that, has the look of an old-fashioned tin lunch box! The details on it are unreal in pictures and I can hardly wait to see more details when I’m actually standing in front of it. First of all, it’s propped up on its front edge with the lid being held up by the matching thermos. If you look at the photo of the front, you’re looking at the inside of a lunch box with a lunch actually packed inside. There are carrot and celery sticks, animal crackers, a juice box, a few Oreo cookies, and of course, a Mini Babybel cheese! Completely adorable details that I am loving. And, take a close look at those walk-up windows; they’re Tupperware containers! Did you have a metal lunch box when you were a kid? I’d love to know what characters were on yours. Well, there you have it, all of the ways Toy Story Land is making me nostalgic before I’ve even been there. I’m sure I’ll have more to share once I’ve gone for an actual visit. Have you been to Toy Story Land? Which toys make you nostalgic?