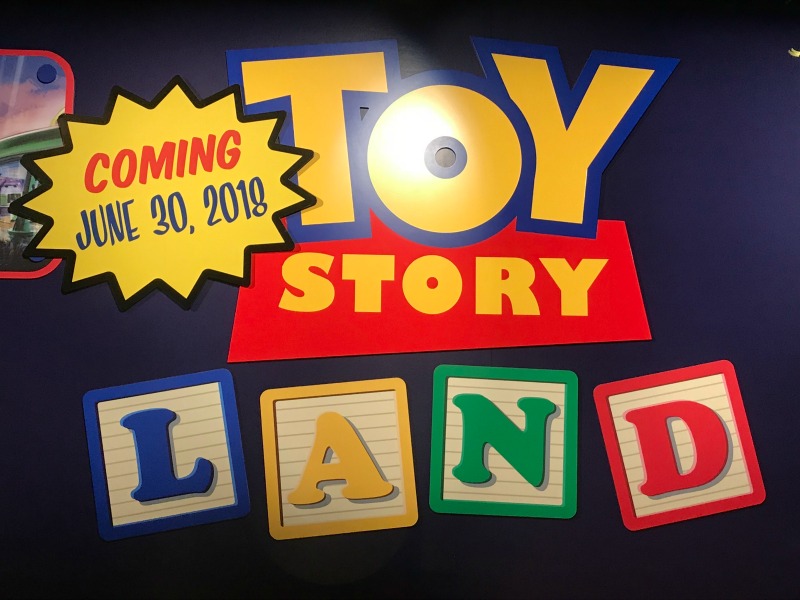 I had the amazing opportunity to listen to Ryan Wineinger, a Creative Director in Imagineering who is working on all the playful details that are coming together for the upcoming Toy Story Land! We even got to go on a tour with him backstage!

Ryan was so excited to share what he and his team has been working so hard on. In fact, when we entered the new land, he told us that this was the first time his “real shoes” had ever touched the ground there – he was pretty ecstatic about that!

Toy Story Land is actually located right behind the famous Chinese Theatre. The Toy Story Mania! attraction will be incorporated into the new land seamlessly and, as we’ve previously reported, will have a brand new entrance from the new land which will take guests from outside in Andy’s backyard through, under, and past all of the different toys that have made up what Andy calls the carnival under his bed. You’ll continue to travel through the queue where you’ll ultimately board the attraction and play the awesome game!

The team at Disney is well underway with building Andy’s backyard which sets the scene for the immersive new land. The area is even surrounded by a gigantic wooden fence, much like the one you might have in your own backyard. The main entrance to Toy Story Land will have guests going from walking through the typical Hollywood glamour of the Studios to seeing dirt start to spill onto the pavement as they enter Andy’s backyard. Guests will shrink down to the size of a toy as they enter and become completely immersed in the environment. Unlike other lands you may see at a Disney theme park, you will be able to see everything in this land as though you are looking at a real backyard. Be sure to pay close attention as we were told that there are many, many details you won’t want to miss all the way down to the grain seen on the wooden toy blocks.

We were even treated to a sneak peek at a partial footprint of Andy’s tennis shoe in the pavement which was quite large as we had already been shrunk down to the size of a Green Army Man. Seeing the size of the footprint really gave us a good idea of how the Imagineers are precise with scaling things to size.

In making Toy Story Land a reality, everything must be made out of toys. The land has speakers and lighting hidden everywhere, including within the Tinker Toy poles. Those poles will get made over and will look like nothing but a toy when the land is revealed to guests – or, honorary toys, rather.

We had an up-close look at a scene that many of you have already seen; Jessie helping Rex hang Christmas lights to get ready for guests (honorary toys) to come visit. The scene shows the teamwork and friendship that is inherent in all of the Toy Story movies. Slinky Dog Dash is intended for the whole family with a height requirement of 38 inches. There will be loops, swirls, and dips and even a super fabulous launcher around halfway through the ride. The launcher is a separate toy piece that Andy purchased and added to the set. The movements in this attraction will mimic those that you would do with an actual Slinky Dog toy.

If you look closely, you’ll notice that not a single wooden block is oriented in the same way as the others as if a child spontaneously built it moments before. Children get lost in the details in their regular play, so they don’t map out perfect orientations of what they’re building. They’re inspired by their play and the area will look like it. The Jenga tower looks as though it’s going to topple over any moment – although Ryan assured us that it won’t!

Toy Story Land is also being planted to look and feel like an actual oversized backyard. Dominoes, blocks, and other toys that Andy would have played with outside will be sitting in the grass, not in the dirt, to look as though they were dropped and left there – just like your kids might do.

We got to see the carnival games box from Andy’s carnival games playset. The buildings were in the process of being prepped to have incredible murals and graphics placed on them bringing them to life. These facilities have, of course, all been constructed from real building materials, but they won’t look like it by the time they are finished. Beautiful graphics and murals will transform them into toys, boxes, and playsets. Off in the distance by the recently-expanded Toy Story Mania!, we could see the vintage Woody’s Roundup lunchbox propped open by a thermos. When complete, there will be a gorgeous book standing open behind the lunchbox displaying some of the Roundup gang and a picnic area that Andy set up for his toys. The tables and chairs will all look like toys – everything you sit down on and everywhere you go in the land will be made from toys. Woody’s Lunch Box will be the main (Quick Service) eatery inside Toy Story Land where guests can walk up and grab a bite to eat and drink. The menu has not been released yet but will consist of old-time favorites with a contemporary flair and old-fashioned soda floats.

We could just start to see the beginnings of the Alien Swirling Saucers attraction. We were lucky enough to see the structure without the finished top which exposed the steel that supports the top of the attraction. We saw the blue edge that’s part of that plastic galactic play set that Andy won at Pizza Planet – another example of how everything being built has to look like a play toy.

When asked if he was nervous about the opening of Toy Story Land, Ryan said, “not even a little.”

While filming video or taking any photos behind the scenes was strictly prohibited, we were allowed to film as Ryan spoke to us prior to heading backstage, so we’re excited to share that with all of you!

Take a look at the video below – my hope is that hearing the passion and enthusiasm in Ryan’s voice as he shares the details of this project that’s near and dear to him will build your excitement for what is sure to be a fantastic addition to Disney’s Hollywood Studios!