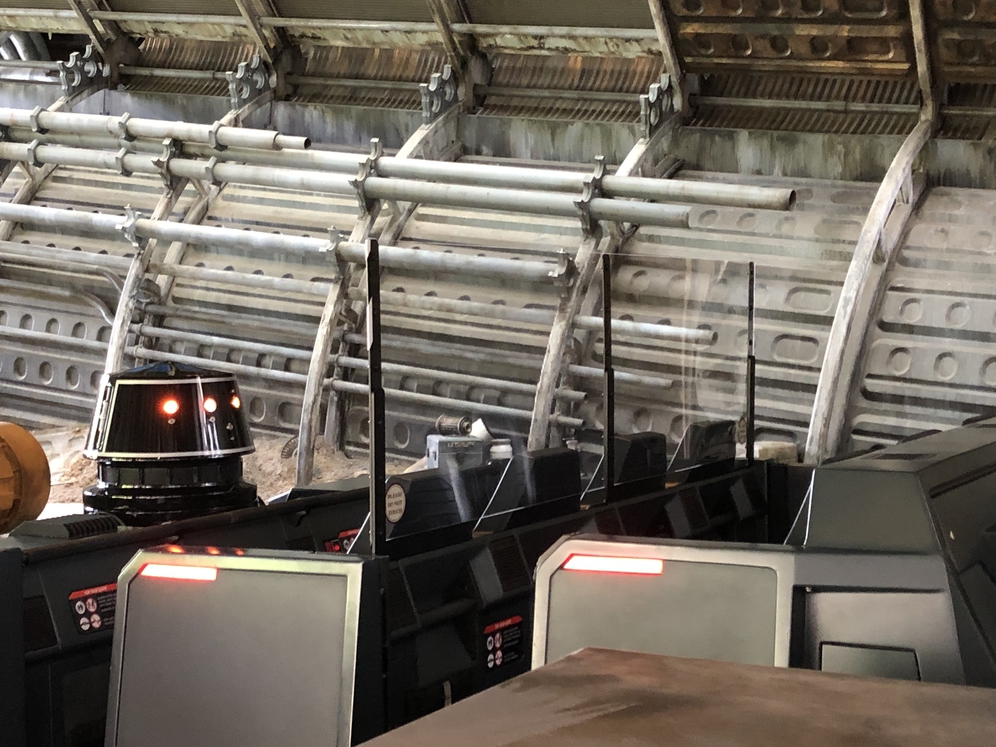 Scoring a Rise of the Resistance boarding group is like finding gold. There’s an odd, palpable hush that descends upon Hollywood Studios at 9:58am each park day. If you’re in the park, you know what’s happening: people are double-checking their cell signals and making sure that My Disney Experience is loading properly. This is go time, and it’s one of the biggest reasons you’ve gotten up early and gotten yourself to the park. You’ll have seconds once the clock hits 10am to get that coveted boarding group assignment, and, as the clock strikes 10, you’ll hear fellow guests near you let out either a squeal of joy or groan of disappointment. To get a boarding group is the highest of highs, and to miss the chance can bitterly color the rest of your park day. It’s the thrill of victory and the agony of defeat, all at once.

Today, the team behind Rise of the Resistance debuted a way to get more of the guests seeking a boarding group what they’re looking for. Plexiglass has been installed in the pre-boarding rooms, on the Resistance transport ship, and on the attraction vehicles themselves, thus allowing additional groups to be loaded into the areas while still maintaining COVID-19 safety protocols.

When the park reopened in July, Plexiglass and metal barriers had been added in spots throughout the queue where guests would have normally come too close to each other. Adding plexi to the newest areas is a step forward in trying to allow more people to enjoy the attraction.

But how does the newest addition of plexiglass change a guest’s enjoyment of the ride? Let me tell you about my experience riding the attraction today.

Right off the bat, I want to say that I am in favor of doing whatever it takes for more guests to ride Rise of the Resistance during this time of COVID. The pressure one feels as 10am nears is not fun. I’m an annual passholder who has had the good fortune to ride Rise several times in the past, and I happily flit around Hollywood Studios quite frequently. And yet, at 9:58am this morning, I was very nervous. I was afraid that I wouldn’t get a boarding group, and that impending dread felt like anything and everything you shouldn’t be feeling at the most magical place on earth. But there I was, sitting on the ground in Animation Courtyard, checking my signal and watching as 10 o’clock drew ever closer. Gulp.

Thankfully, I found a nugget of gold this morning and got boarding group 34. Whew. When it was time, I made my way to the attraction and snaked my way through the queue. The queue looks extra long these days thanks to physical distancing. Fear not. It took me about 20 minutes until I was inside in air conditioning, and the interior portion of the queue went quickly.

Plexiglass has now been added to the pre-boarding room. The addition of the barriers allows 10 separate groups to now be in the space.

I was in the middle section between two sheets of plexiglass, and I could still see Rey’s hologram. There are stickers on the barriers asking guests not to touch them.

Did it feel a bit weird to be watching the action through a sheet of acrylic? Yes, a bit. But it was definitely doable.

The intermediate transport has also now been outfitted with plexiglass barriers, but these have been installed with velcro from the top and side, thus allowing the thinner, more flexible barriers to move with the ship when it moves. Guests are assigned a colored dot to stand on before entering the pre-boarding area, and that color assignment carries through to the transport. You load in when you are told to, and you exit the transport when you’re told to so that groups are kept separate. The barriers on the transport ship weren’t in the way per se, but they were definitely more noticeable here than they were in the pre-boarding room.

I felt the greatest impact of the new plexiglass on the attraction vehicle. Since July, before the arrival of the newly added barrier that runs between the front row and back row of each vehicle, guests were loaded into vehicle by party. If you were a party of one, you had the vehicle to yourself. Today, I was seated in the back row and another party was on the other side of the barrier in front of me.

As you can see in the picture above, depending on the lighting of the scene, the barrier can act like a mirror. Thankfully, the loading area was the spot where this was most present. The plexi will reflect lights that are behind you throughout the attraction, but it’s not too distracting.

As you can imagine, being behind the plexiglass left me feeling somewhat removed from the action. When the wind whips through a scene, the plexiglass acts like a wind break, and while you might feel the wind from the sides, it’s not coming in from the front, and it just has a different impact.

To be honest, the plexiglass made me feel just a bit like I was watching a TV show. I felt somewhat disassociated with what was happening. Weird? Maybe. But that’s what it felt like. It’s still an amazing attraction, and one that I would recommend that everyone and their great aunt Susie ride, but I think it’s good to know going into it that the back row is different now.

So, what happens moving forward? Great question. Will requesting the front row of Rise of the Resistance vehicle become like asking for Section B, Row 1 for Soarin‘? I don’t see requests like that being sustainable for Rise. Cast members need to load you and get you on your way quickly, and I just don’t see accommodating seating preferences being something that’s doable.

Again, and foremost, I’m for whatever measures need to be implemented to allow greater numbers of guests to ride this attraction during this horrible pandemic. Thankfully, I had the chance to ride Rise as it was originally designed. And, hopefully at some point in the future, I’ll get to again. Until, then, I’ll find the fun in the new normal, and I’ll continue counting my blessings every time I have the privilege of joining the Resistance.

Please let me know what you think if you’re able to ride Rise with the new barriers. I’d love to hear your thoughts!