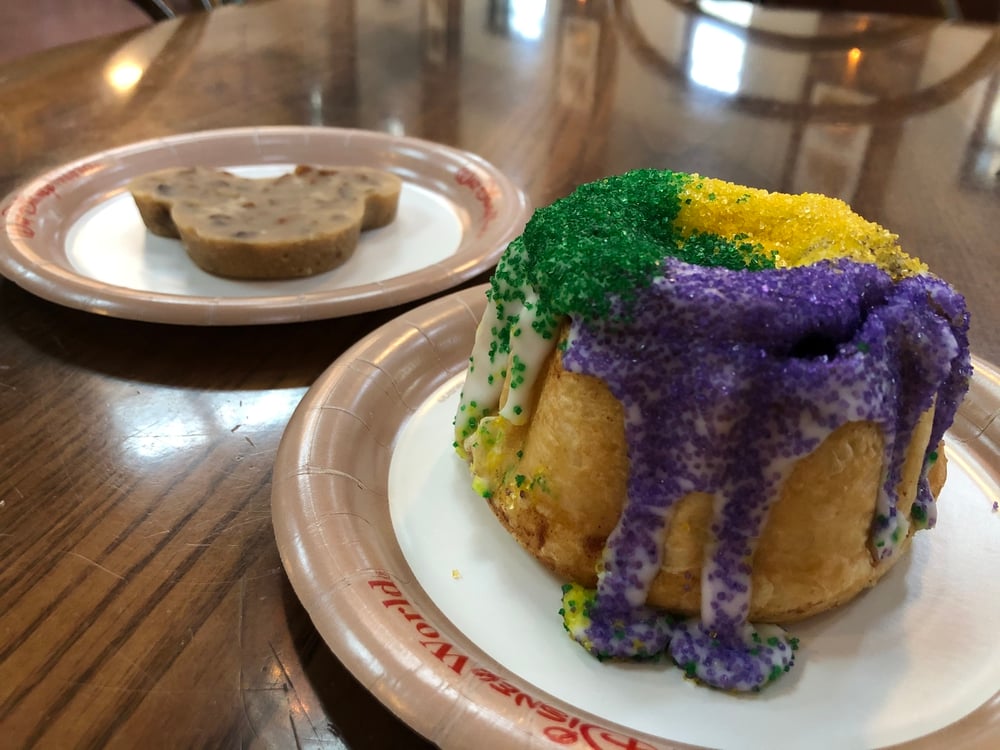 In the spring of 1988, my family spent Spring Break in New Orleans. My father had a work conference, and, as would happen when places, schedules and stars aligned, my mom, little sister, and I tagged along. We spent the time that dad wasn’t in meetings and workshops exploring the area as a family. During our trip to New Orleans, we had the blessing of staying in the French Quarter. The streets were filled with people and wrought iron and laughter and music. We enjoyed a glorious brunch at The Court of Two Sisters, found a streetcar (named Desire, of course), and savored beignets by the Mississippi River at Café du Monde. We explored and investigated everything. It was heaven. New Orleans had me at hello.

Fast forward years and years and my youngest, then 8 years old or so, had decided that the theme of that year’s birthday party was to be Mardi Gras. So, into party planning mode I went. Of course, the birthday cake needed to be a King Cake. What else would it be? The traditional, quintessentially New Orleans cake is more of a pastry with layers and layers of thin brioche dough, cinnamon, sugar, and cream cheese filling all lovingly rolled together and formed into a ring. And a tiny plastic baby would traditionally be hidden inside, of course, but I opted to use a rather large plastic button about the size of a half dollar for the birthday cake. No Heimlich maneuver at our parties, thank you. I was up to my ears in King Cake, thanks to Southern Living‘s recipe, but it was completely worth the time and effort. 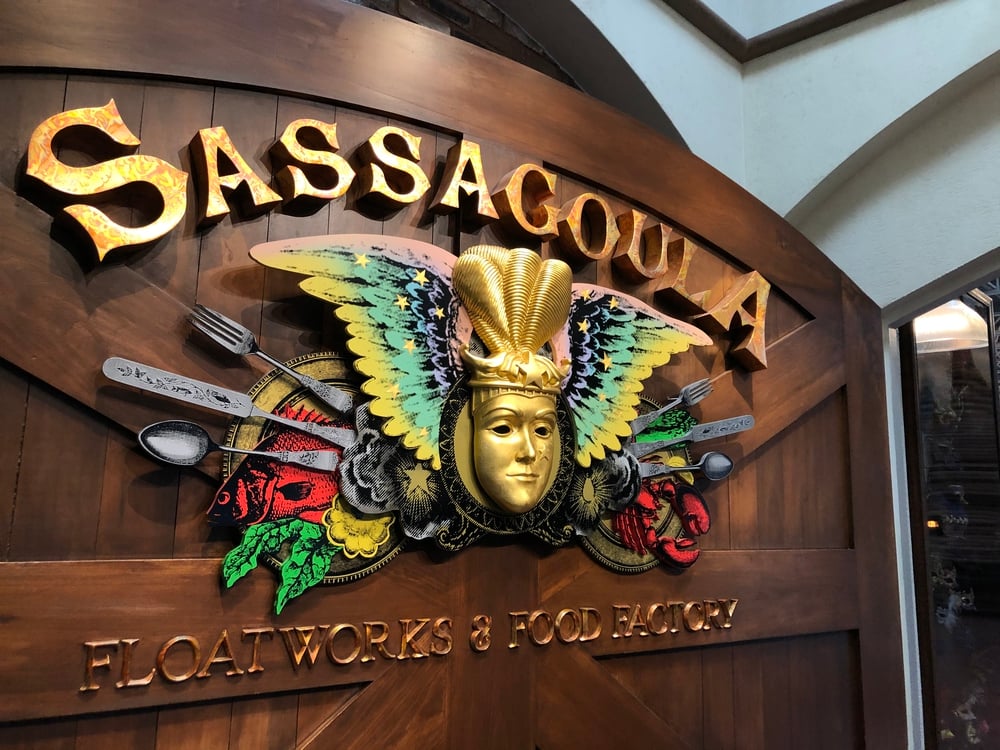 Whether you’re a New Orleans native or just pining for a taste of the Crescent City, if you’ll be at Walt Disney World this Mardi Gras season (or anytime of year), you’re in luck. Disney’s Port Orleans Resort – French Quarter has a taste of Mardi Gras waiting just for you. Stop on by the French Quarter’s food court, Sassagoula Floatworks and Food Factory, and let the good times roll. 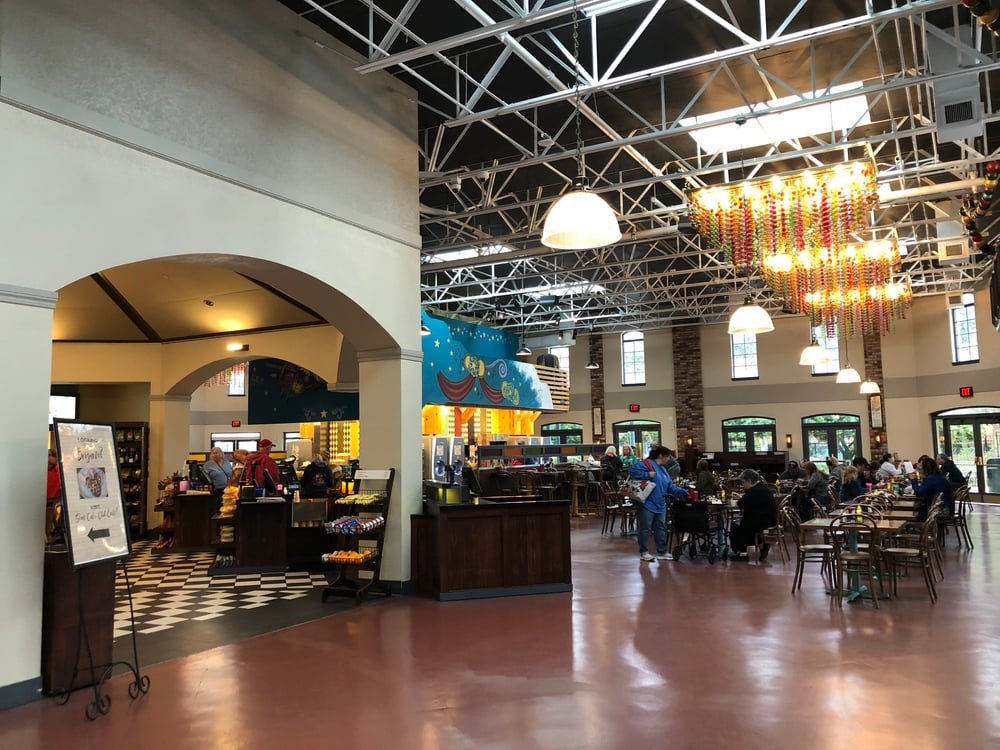 Since Fat Tuesday is this Tuesday, February 25th, I figured you and I should do a little Mardi Gras prep in this installation of Saturday Snacks by sampling a few iconic New Orleans treats at Port Orleans – French Quarter. Ready? Allons-y! Let’s go!

First of all, don’t show up to try Mardi Gras-inspired treats without your sweet tooth. Or a friend. Or both. These snacks are sweet. Like woah! sweet. Not for the faint of heart. 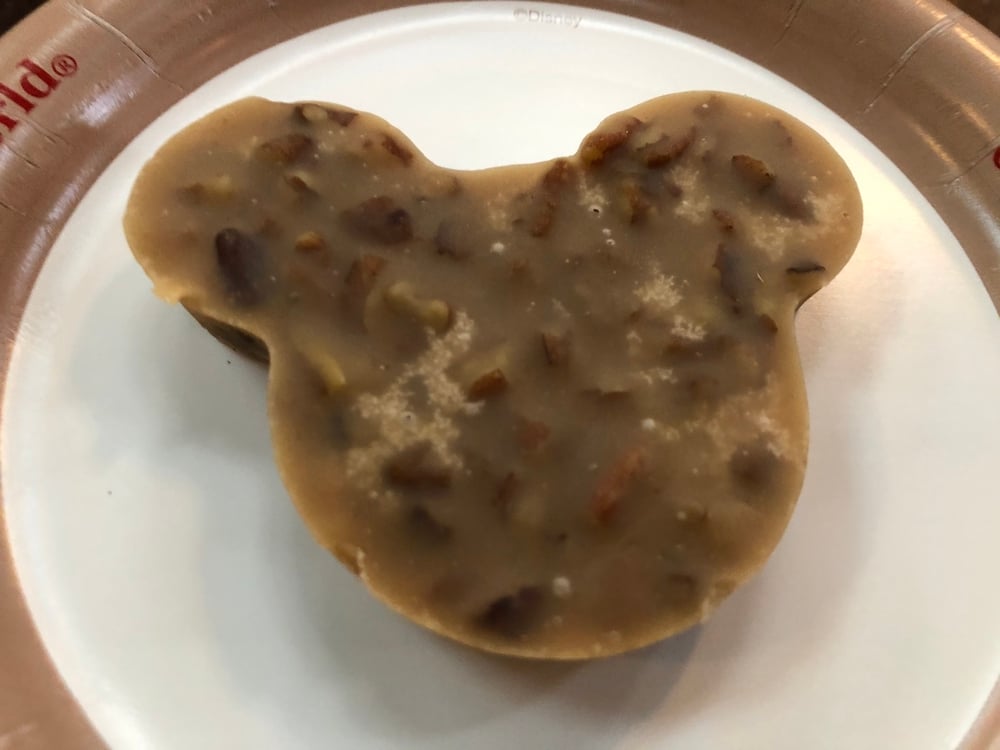 For today’s Mardi Gras prep, I decided that we’d have a go at a Mickey Praline, and, of course, a Mardi Gras King Cake. Armed with a to-go box or two for the leftovers, I sat down to sample the treats. 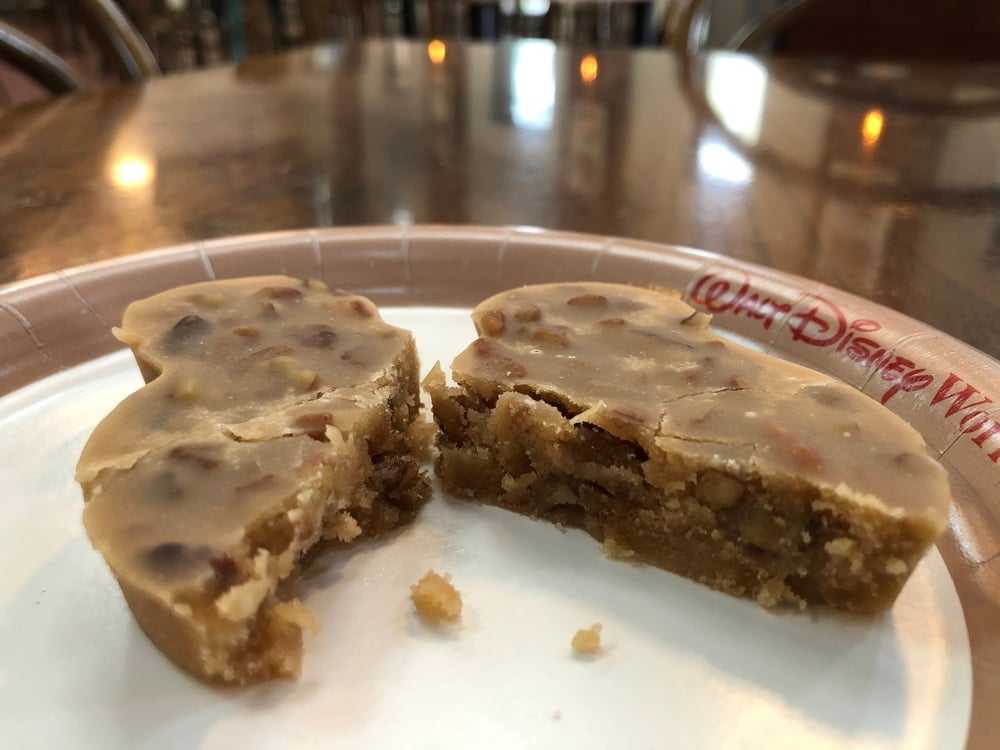 The Mickey Praline is $3.99, and is packed to the gills with brown sugar. A praline is made of brown sugar, pecans, vanilla, and, depending on the recipe, evaporated milk or heavy whipping cream. This was my first pecan praline. I know what you’re thinking: I know that I need to try other pralines to get a well-rounded feel for what a praline really is. You’re right. With that in mind, I’ll just speak to this one. The size of the Mickey Praline isn’t large, and that’s for good reason. This treat is cavity-inducing sweet. While I give it points for the generous amount of pecans used in this snack, I did not enjoy it. I would not purchase another. It tastes like you’re just eating sugar and pecans. It’s Mickey-shaped, but, unfortunately, not all things shaped like Mickey taste good. 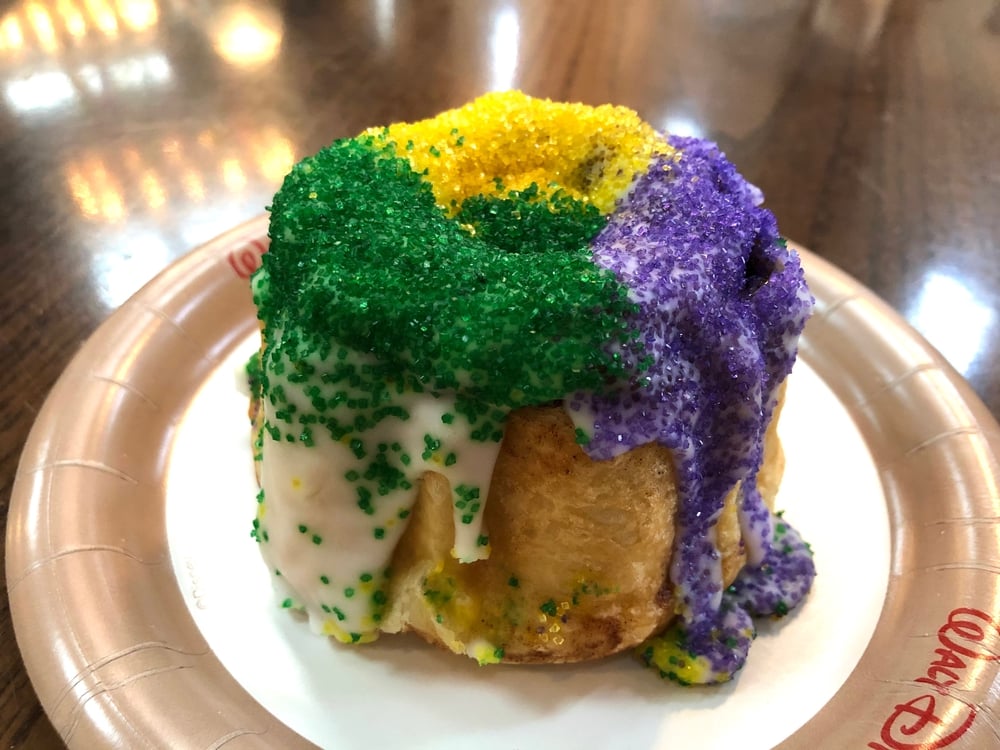 The Mardi Gras King Cake is $4.59, and, out of today’s two snacks, was my favorite. It features layers of dough akin to that of a cinnamon roll. This tall treat is covered in sugary glaze, and crowned with green, yellow, and purple sprinkles. This is a generously-sized dessert. 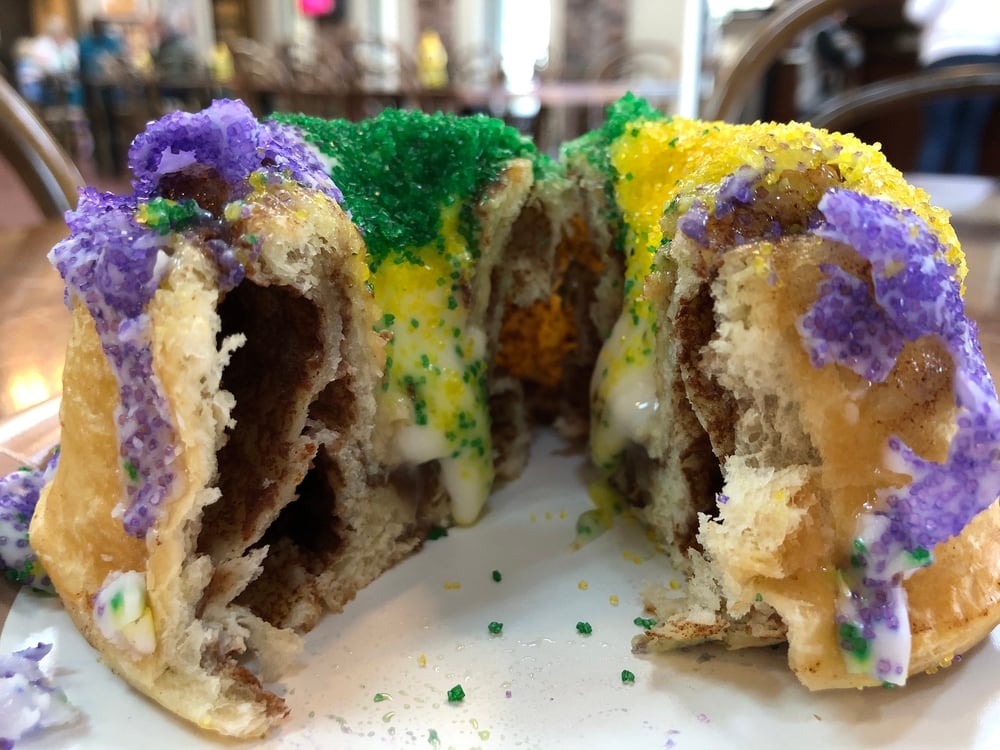 As soon as I took a knife to the cake, the intoxicating aroma of cinnamon wafted out of it and the cream cheese filling in the center began oozing out. It was glorious. The cake reminded me of a large cinnamon roll, which, as I think back to the cake that I made my kiddo years ago, was the thought that I had then. This treat is perfect to share, and the crunch of the sugar sprinkles and glaze partners beautifully with the layers of dough and cream cheese filling. This one is a winner. I would repurchase this treat just about anytime of year, Mardi Gras or not.

Of course, what would a trip to the French Quarter (either in Louisiana or Central Florida) be without beignets? You can purchase beignets at Port Orleans – French Quarter at Scat Cat’s Club Café, just next door to the food court. 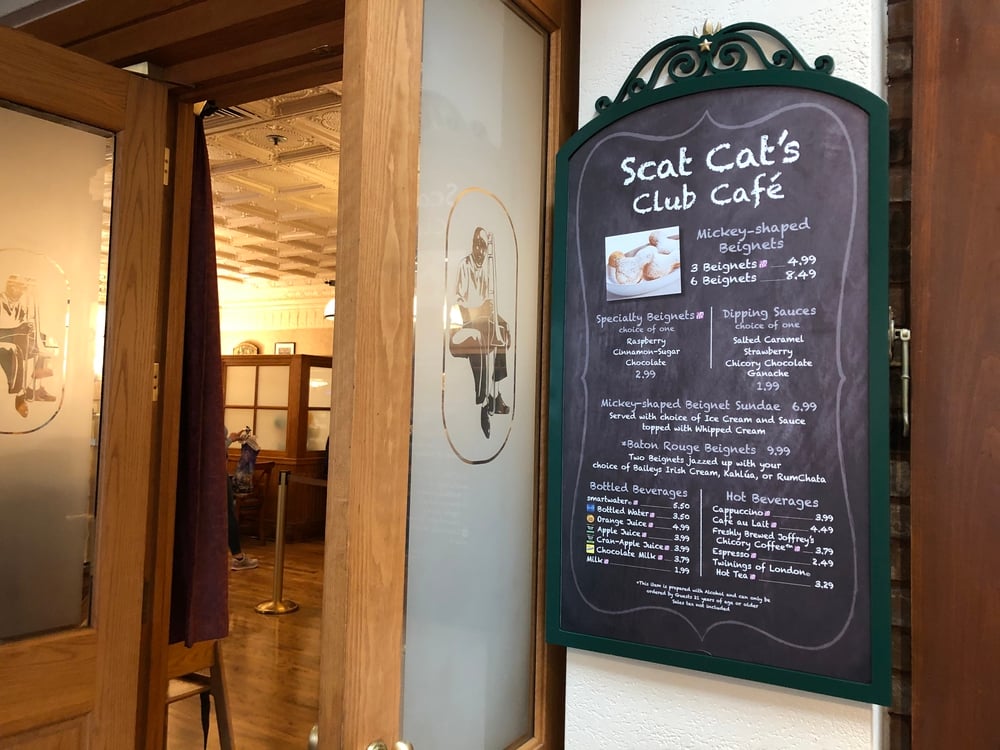 You have your pick of beignet treats here, and, if you’re really wanting to laissez les bons temps rouler, you can get the Mickey-shaped Beignet Sundae ($6.99). This sundae comes with three Mickey beignets, your choice of ice cream, and topped with whipped cream and chocolate sauce. Be warned: it’s a massive sundae. My hubby and I tried the beignet sundae on a date night soon after Scat Cat’s Club Café opened, and I’m so glad that there were two of us trying to tackle this sundae together. We still couldn’t finish it all. 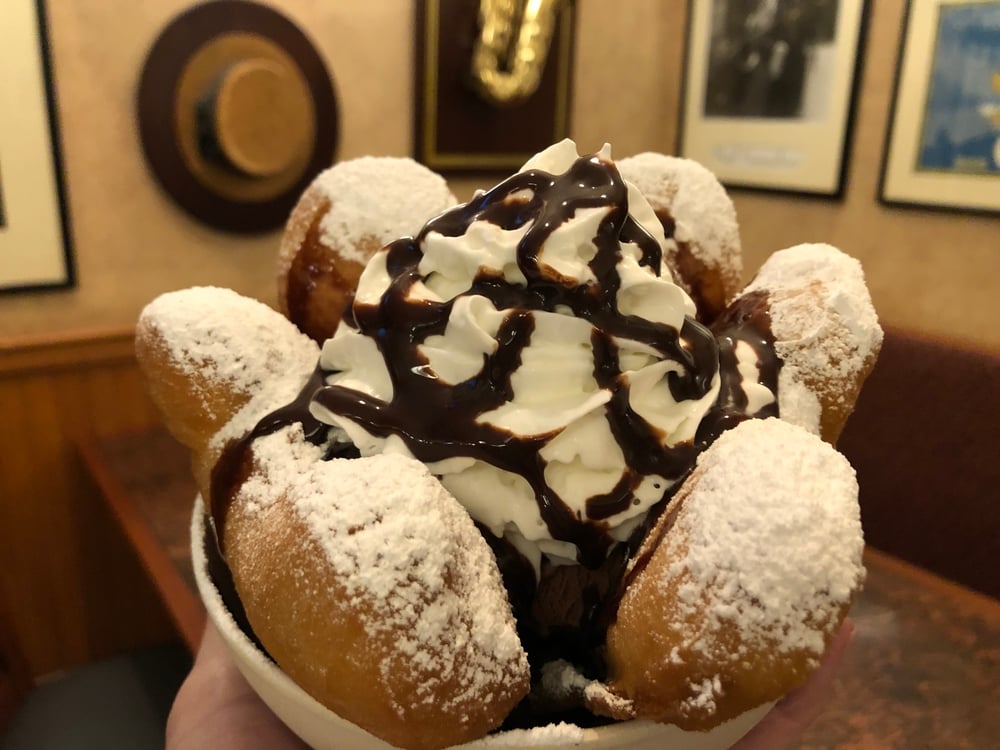 Just a note: the Mickey beignets are more of a doughnut consistency than a traditional, semi-hollow beignet. As long as you don’t mind that, this is a great dessert. I’m sure that you’ve already guessed by the heaping helping of powdered sugar perched atop the beignets in the sundae, but this snack makes a mess. A MESS. The cast members who work in Scat Cat’s Club Café are saints. I’m sure they’ve cleaned up their fair share of powdered sugar-encrusted tabletops. 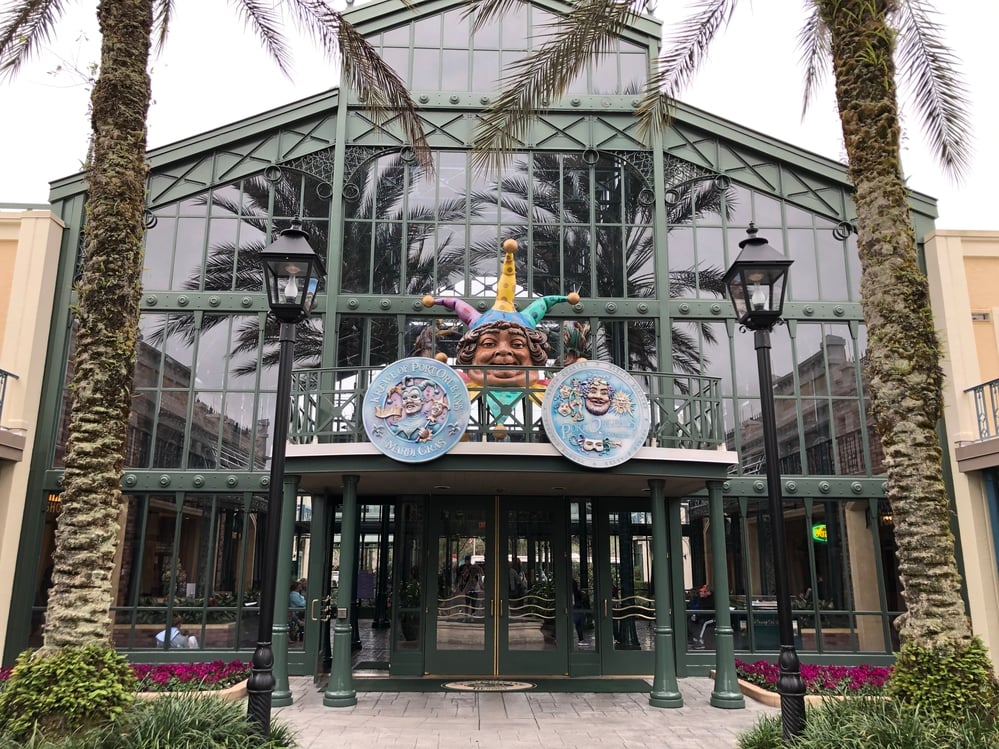 So, what about you? How do you get celebrate Mardi Gras while at Walt Disney World? What’s your favorite snack at Port Orleans – French Quarter? Please let me know in the comments section below.

ps If you’re ever at Sassagoula Floatworks and Food Factory for lunch or dinner, and you’re in the mood for something a bit lighter (especially after Fat Tuesday), I highly recommend the Sassagoula Power Salad ($11.99). Any salad with quinoa, shredded kale, and dried cranberries is a winner in my book. If you’re looking for a meal that’s more traditional to New Orleans, my husband loves the Gumbo ($8.99).