That one time we went to DisneyQuest 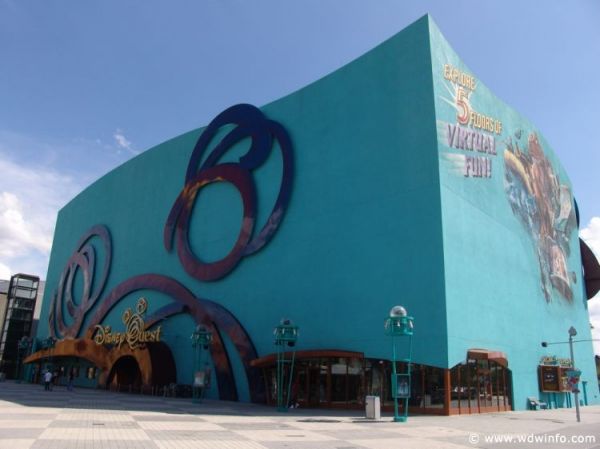 One week ago, my husband and I had dinner at Morimoto Asia. Since we were in Disney Springs, we thought we’d check out some of their new offerings, and one of their old.   We have annual passes that allow entrance to Disney World, Disneyland, the waterparks, and lastly, DisneyQuest. We had never ventured to DisneyQuest before. I think the reason for that is because we usually travel with people who do not have free entrance to DisneyQuest, and they would most likely rather spend their time in WDW exploring the parks than exploring a 5-story, bygone (1998!) virtual reality museum.

We carved out some time after dinner to explore. However, dinner ran a little later than we expected, and by the time we got to DisneyQuest we only had an hour of exploration. (Note: regular admission, which is usually $45, was half-priced when we got there at 9pm) As my husband checked our Marketplace Co-Op wares at bag check, I spoke to the cast member working the elevator, asking for recommendations, keeping in mind our time crunch.   I had the map in hand, reading attractions to him, looking for nuggets of wisdom, “Mighty Ducks Pinball Slam?” I asked, only to be met with a sarcastic laugh and “Yep, that’s here.” “Well, how about Aladdin Magic Carpet Ride?” “Yep, that’s a thing that exists.” But this cast member had one golden recommendation: Buzz Lightyear’s Astro Blasters. So that’s where we went first. Buzz Lightyear Astro Blasters is a bumper-car-type ride with a shooting element. We stood as the only two in line when the cast member asked if we’d like to ride together or in separate cars. I originally said separate (since there was no one else in line) and she told me that it may be difficult to steer and gun with just one person. So Matt and I rode together. More people showed up in line and well, let’s just say one of the most gratifying feelings in the world is shooting an opponent with one of those balls and seeing them helplessly spin out for ten seconds. We rode a few things in between but our next E-Ticket item was Cyber Space Mountain. Let’s just say this is not for the faint of heart, or for the stomach of someone who just ate their weight in Asian fusion. As Bill Nye the coaster guy warned us as we were at the designing kiosk, “are you sure you want to have 6 loops and a trackless free fall?” My husband and I looked at each other and thought, c’mon, how bad can this be? Fast forward five minutes: bad. The restraints when you actually ride your designed coaster are more intense than Rock ‘n’ Roller Coaster, and in our case, it also went upside down more than Rock ‘n’ Roller Coaster. We should have gotten the hint when the attendant told us we had to take ABSOLUTELY EVERYTHING out of our pockets.   My only regret is not buying the VHS of our ride experience. Yes, I said VHS- which is advertised as still being available for purchase. What other way to pay tribute to the 1998-ishness of it all?

Could DisneyQuest be saved? I don’t know.  I haven’t laughed as hard as I did there in a very long time. But, if they don’t update any of the properties or technologies I don’t think they could have reasonably suspected an outpouring of new visitors. Note, the Mighty Ducks Pinball Slam attraction is based on the short-lived Mighty Ducks cartoon series that ran from 1996-1997. Not the great movie of the 90s which shares the same name! Also, do that math: the animated series was already done by the time DisneyQuest opened in 1998! To give credit where credit is due, DisneyQuest is an amazing arcade. They have cabinets that are in beautiful shape and they are all included in the price of your admission. But who’s going to Disney World to play arcade games? No one, apparently.