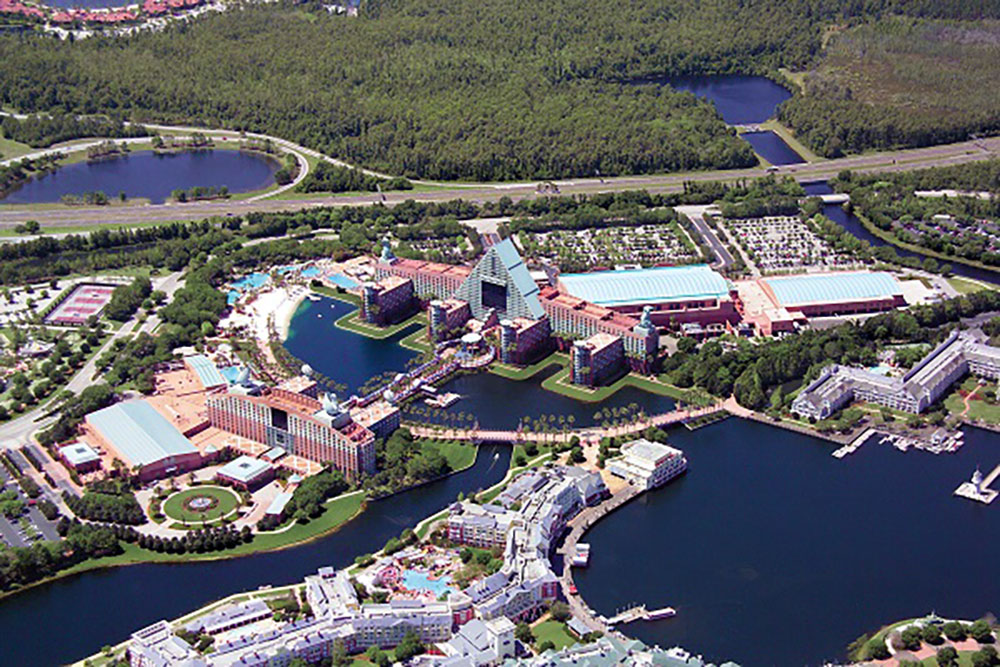 The Swan and Dolphin Resort Hotels at Walt Disney World spark strong opinions among Disney fans and guests. Previously we took a look at the history of these two resorts and explored their start, their construction, and the vision behind each of their famous (or infamous) styles of architecture. However, there is another aspect to this — and any resort quite frankly — that needs to be explored: the site features and landscaping.

The purpose of the site design and landscaping of an area is to transform a space into a beautiful, joyful, pleasing, and welcoming environment. Plants, trees, flowers, green spaces, hardscape features and water features all contribute to bringing a space to life.

Herbert-Halback, Inc. — a landscape architecture firm in Orlando, Florida who was responsible for the design, site development, and landscaping architecture at Disney’s Animal Kingdom Lodge Resort — was also responsible for the landscape architecture at Disney’s Swan and Dolphin hotels. Frederick “Fred” Halback, Co-Founder and Senior Principal of Herbert-Halback, led the project. Today the firm is known as Marquis Latimer + Halback, Inc., in St. Augustine, Florida.

Encompassing 160 acres, the Swan and Dolphin Resorts were actually one of the first projects Fred Halback worked on within Disney, but it was not the first they worked on with the Tishman Realty & Construction Company and Alan Lapidus. In my previous story covering the history of these two resorts, I reported that in the early 1980s, John Tishman won the contract to start building EPCOT Center. It was then he realized Disney’s second theme park would bring considerably more visitors and business to the resort. Soon after, Tishman negotiated a favorable lease for a prime hotel in Lake Buena Vista. Tishman asked Disney who they liked for an architect; Alan Lapidus was chosen for the job.

In 1979, Lapidus previously worked with The Walt Disney Company when he was commissioned to build the Mediterranean Village Resort between the Contemporary Resort and the Ticket and Transportation Center. However, after Michael Eisner joined the company as CEO, that project was scrapped.

Now, Lapidus was working for Tishman, not Disney, on what would eventually become The Hilton at Walt Disney World (now Hilton Orlando Lake Buena Vista). Fred Halback and his company were chosen as the landscape architects of record for this project. Halback said that Tishman built this 880-room hotel for $88 million and opened the Hilton in one year and a day from when they broke ground.

“We were young in our careers when we got that particular project,” said Halback. “For us, we were a small and growing firm. At that time it was the ability to really learn about design, construction, and project management. To be able to deliver a project like that and in that short period of time was something.”

In 1986, Tishman was under the assumption that he was going to build a convention hotel, a Sheraton, at the EPCOT Center Resort. Alan Lapidus was selected as the architect and Herbert-Halback was going to do the landscape architecture. Eisner cancelled all these projects. As a result, Tishman sued Eisner and the Walt Disney Company when he claimed that Eisner and Disney broke an agreement with him about bringing in any outside competitors for 10 years to build and/or operate a convention hotel inside the Disney park. The lawsuit was settled in 1988 and Tishman told Lapidus that he just negotiated to lease two additional hotel sites with Disney execs. The hotels would also include a huge, state-of-the-art convention building. Part of the deal included Eisner being able to choose the architect. Eisner choose Michael Graves as the design architect, but Tishman was allowed to have Alan Lapidus as the architect of record.

Herbert-Halback was not automatically brought back on, but was given the opportunity to submit a proposal. They were eventually chosen to provide the landscape architecture for the resorts.

“We were chosen for this project, but we were told that we needed to go up to Princeton [New Jersey] and visit Michael Graves’s office and meet with Michael,” said Halback. “Again, being a young, somewhat-full-of-himself professional, I started scratching my head about Michael Graves. What am I going to do? What I am going to show him?”

Prior to his visit, Halback said that Graves’s office had sent them “some of the very early bum wad drawings, almost cartoonish sketches that Michael Graves is known for.” What Halback and his team realized was that Graves’s sketches looked to them like a take-off of a variety of different Italian architecture styles.

“We thought it looked like Hadrian’s Villa with some of those sorts of grounds, etc. Some of that classic architecture, but as I like to say cartooned as only Michael Graves can do,” said Halback. “Instead of doing a bunch of preliminary sketches, I filled my suitcase full with every book I could find on Michael Graves…there was a reasonable amount back then. [I also looked for] every book I can find on Hadrian’s Villa and Italian landscapes and went up to his office. I was ushered into a conference room and he [Graves] came in a few minutes later and he said to me, ‘What do you have that you want to show me? What are you imagining for this hotel?’ I looked at him and said, ‘I hope you don’t mind, but I thought it would be presumptuous to come up with sketches before I knew that I had the right idea of what you were looking for.’ ”

Halback started laying out all the books he had on Graves’s architecture, as well as all the books he had on Hadrian’s Villa and Italian landscaping. Graves and Halback hit it off. Halback said he was a “very charming fella.” What impressed Graves about Halback was that his approach to the project was from a research perspective and that he did not come in with a set of preconceived ideas. “Through that design process,” said Halback, “Graves pretty much let us do just about everything outside the building — from the big colonnade that goes around, to the swimming pool, to the grotto. He had envisioned those spaces in his original sketches, but from that point forward we had free rein to do all of the sight design and finishes, all of the hardscapes, lighting, landscaping, plantings, and etc.”

Halback tells this story about the time before all the papers were signed and everyone proceeded with construction drawings, there was a big presentation at the Contemporary Resort Hotel where all the parties were to present their plans and ideas for the Swan and Dolphin hotels. However, because of the recently settled lawsuit and lingering feelings about the old plans and hotels that were scrapped, there was still tension between John Tishman and Michael Eisner.

“There were a lot of people there,” said Halback. “There must have been at least 50 people from the Disney side (including Michael Eisner’s wife, Jane), 50 people from the Tishman side, all the consultants, us, and anyone else who was involved in this project.” He said then they waited around an hour and a half for John Tishman to walk in because he didn’t want to come in before Michael Eisner. “It was interesting to watch these two play this game of ‘who’s going to be the last person sitting’ so the presentation can start.”

Meanwhile, while all this was playing out, Michael Graves was sitting in the back of the room with some of his younger associates. Everyone from Disney and Tishman were stressed out about all of this, but Graves did not seem to be bothered. “Everyone was up front looking at the boards with Tishman and Eisner going back and forth and all the while Michael Graves was calmly sitting in the back of the room,” said Halback. “Finally they were going over the mock-ups of what the [guest] rooms were going to look like. I always lovingly referred to the interior design of the rooms as being Pee Wee’s Playhouse. They were very cartoonish and some could say garish, but that was Graves’s theme.”

At one point in the meeting, as they were going over the interiors, Halback says, “Michael Eisner stops and says, ‘I just don’t know about these interiors. It just kind of looks like a French [bordello].’ Everyone stops and Eisner looks to the back of the room and says, ‘Michael what do you think? Don’t you think these are a little bit [expletive]?’ And Graves, without missing a beat, says, ‘Well Michael, you know better about that than I would.’ Everyone stopped and turned to Michael with stunned looks on their faces to gauge his reaction. He then burst out laughing because he thought that was such a great comeback.”

Michael Graves was not only responsible for the design of the hotel, but also did all of the interiors, the signage, the menus, the uniforms and more. Halback said it was really a unique experience for him because the architect was really the “master builder…it’s what architects used to be…where they got to do everything.”

Even though Graves approved everything they did, Halback said we were a little fickle because he [Graves] trusted them so much to run with everything outdoors. “Of course he made changes and suggestions,” said Halback. “Of course we did pretty much everything he asked for, but I think it all started from our first meeting and the confidence he had in us. I think it all started with that relationship we had created with him from the beginning and he had some confidence in us.”

So, if it was not for the big lawsuit between Tishman and Disney, Herbert-Halback would not have had the Swan and Dolphin project. As previously mentioned, they did the landscaping work for the Buena Vista Palace Hotel (currently the Hilton Orlando Buena Vista Palace), as well as the Hilton at Walt Disney World, but all that work was done for the Tishman Company and others. This was the first time Herbert-Halback was doing work for The Walt Disney Company. “For us it was a big coup to be able to break into the Disney realm,” said Halback. “Even though we were technically really hired by Tishman and not Disney.”

Herbert-Halback were involved all the way through the process not just in the design, but also the construction detailing, the selection of all the planting materials, and the overseeing of the installation for both hotels.

Once Halback and his team got past the design schematic and the design development, most of their relationship then shifted to working with Alan Lapidus. Halback, who had done a number of projects with Alan and his team, thought he [Lapidus] was a “very nice fellow, unassuming and appreciated the history of where he, as well as his dad Morris, had come from.”

“The Swan and Dolphin landscaping was to play off of Michael Graves’s inspiration of Hadrian’s Villa, this sort-of-cartoonish Italian architecture and this great crescent-shaped lake with a promenade that went around it that both hotels sat against, as well as the causeway that connected them.”