No pets allowed with the exception of Service animals

The award winning Walt Disney World Swan consists of a twelve story main building with two seven-story wings. There are 758 guest rooms, including luxury suites. Perched on its rooftop are two graceful swan sculptures. *Note: The Swan Hotel is smoke free and does not allow smoking in the guestrooms. 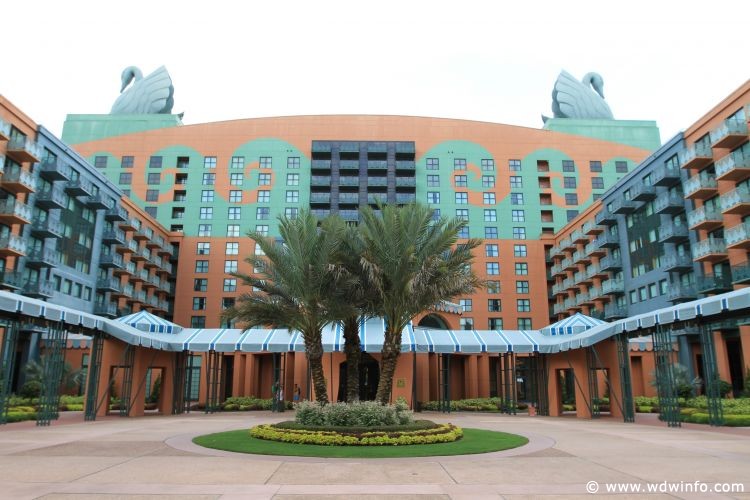 Equally distinctive, the Walt Disney World Dolphin has a twenty-seven story main building and tower with four nine-story wings. This resort has 1,509 guest rooms, including luxury suites. The coral and turquoise exterior serves as a colorful backdrop to giant banana leaves. Two 56-foot Dolphin fountains adorn the roof. *Note: The Dolphin Hotel is smoke free and does not allow smoking in the guestrooms. 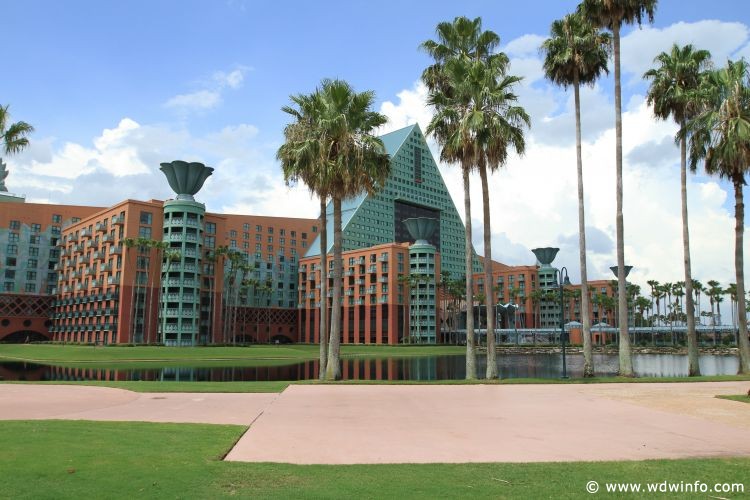 Both resorts have completed a redesign by renowned architect, Michael Graves. The guestrooms have a luxurious yet relaxed feel. Perhaps the best feature are the amazing Heavenly Beds. You'll slip under a lofty white down comforter onto a pillow top mattress with five down pillows to snuggle in. Crisp, white 250 thread count sheets provide the final luxurious touch. Getting up in the morning isn't easy when you're enveloped in your own cushioned cloud.

The pool complex is in a word - "incredible." The three acre grotto setting is home to waterfalls, a white sand beach, water slide, poolside casual restaurant and the trademark "swan boats."  It's the perfect spot to play or simply relax.

Hungry? From five star dining to snacks on the run, you'll find everything to satisfy your appetite within these resorts. There's the prestigious Todd English's bluezoo restaurant, Don Shula's nationally acclaimed steakhouse as well as buffets and fun themed restaurants.

Annually in October, the Swan and Dolphin Resorts host their Food & Wine Classic. Guests can sample wines from around the world, savor culinary artistry from pastries to pasta, and even attend educational seminars to learn about wines, cocktails, beer, pasta-making, cheese pairing or the fine art of sushi and sake. Read more...

When you're ready to be pampered, the Mandara Spa is the place to have your cares washed away. This fantastic spa is part of the Steiner family which has facilities in the most upscale locations worldwide. If you've ever been on a Disney Cruise, this is the same company that runs the luxurious spas found onboard. Treat yourself to a fabulous experience and you'll look at "relaxation" in a whole new light.

The Walt Disney World Swan and Dolphin hotels are situated directly across from each other and are connected by a canopied walkway that leads to the boat launch to Epcot and Disney's Hollywood Studios. Guests are also within walking distance to both of these theme parks. There's nothing to compare to strolling to your destination, particularly in the evening. The lights are twinkling, the boats are passing by, and there's no denying the magic in the air.

The Dolphin Hotel is closest to Disney’s Yacht Club and Beach Club Resorts, while the Disney Swan Hotel is adjacent to the Boardwalk Resort area. There's night life to enjoy at both resorts, with the bustling Boardwalk a short stroll away.

While they are conveniently located on Disney property, the Swan and Dolphin are part of the Starwood Resorts and Hotels family of deluxe resorts. Since Disney does not own either of these resorts, they can offer discounts that are not available through Disney.

Another great feature of the Swan and Dolphin resorts is that guests staying here have many of the same privileges enjoyed by guests staying at a Disney World Resort. Want to beat the crowds? Then take advantage of Disney's exclusive Extra Magic Hours. No need to be concerned about transportation to the theme parks, water parks and Disney Springs. It's all complimentary and included in your stay.

Whether you choose the Swan or Dolphin, you'll enjoy the best of both. Recreation, dining, entertainment are shared venues that all guests are able to experience. These are "resorts" in the true sense of the word. It's not often that a destination makes the theme parks seem secondary. That's what awaits you when you stay at the Walt Disney World Swan and Dolphin resorts. 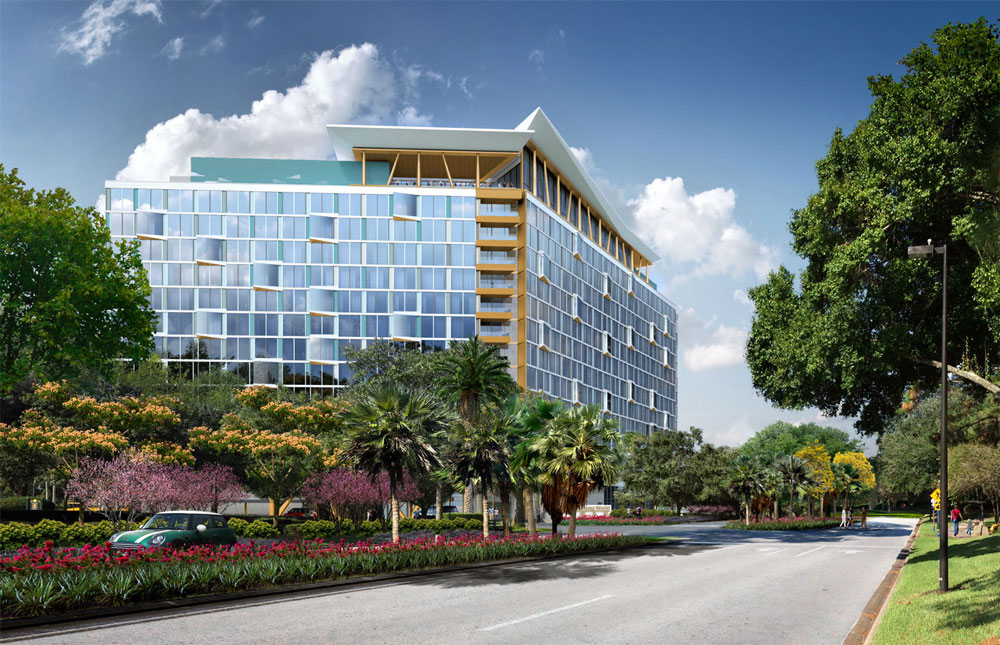 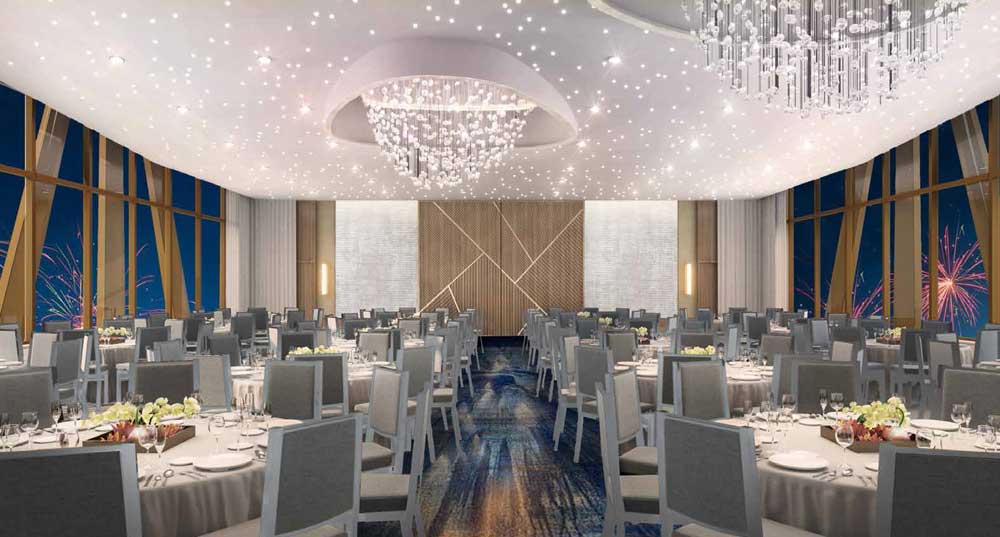 The hotel’s top floor is a glamorous event space with floor-to-ceiling windows, providing an experience like no other. Boasting breathtaking views of the Swan and Dolphin as well as two incredible Walt Disney World theme parks, EPCOT and Disney’s Hollywood Studios, the space is ideal for weddings and gala events.

The Walt Disney World Swan Reserve provides a deluxe, yet tranquil oasis situated in the middle of the magic of Disney’s theme parks and attractions. Among the 349 guest rooms are two presidential suites and 149 spacious suites, all with floor-to-ceiling windows and perfect for families of 6-8. The hotel offers its own signature restaurant and bar, lobby lounge, grab-and-go market, health club, and pool. 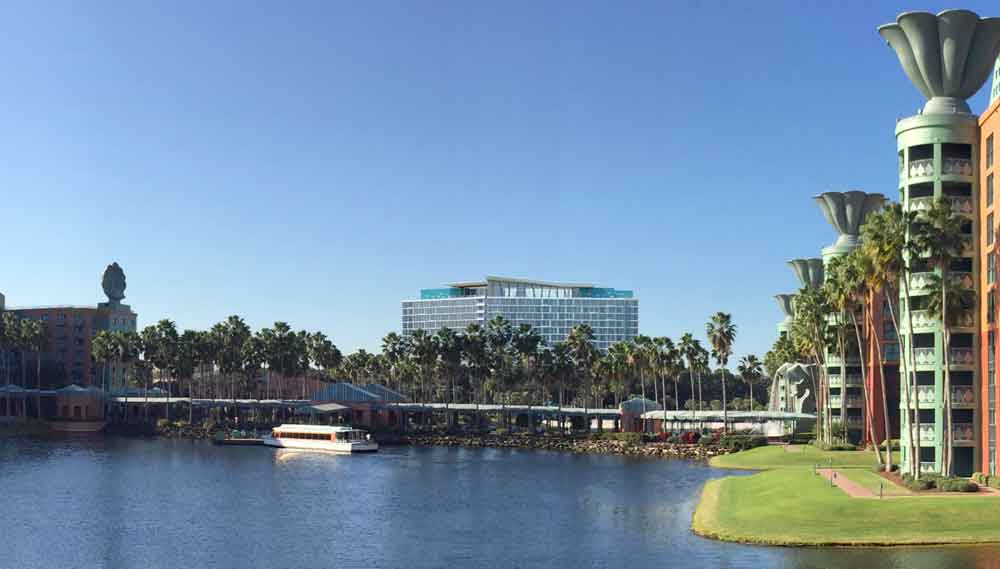 Bus service is available from the Walt Disney World Swan and Dolphin. Buses depart every 15-20 minutes.

Epcot: Walking: A pleasant 15 minute walk will have you at Epcot's International Gateway.

Epcot: By Boat: The boats are a nice, leisurely way to travel. It is shared transportation with the Boardwalk and Yacht Club so be sure that you give yourself ample time.

Disney's Hollywood Studios: By Boat: Take a separate Friendship launch. As with the Epcot launch, service is shared with the other Crescent Lake resorts.

Holiday Happenings at Swan and Dolphin

Santa will bring the North Pole experience to the Walt Disney World Swan and Dolphin Resort with a new Santa’s Village themed area for guests to enjoy a socially distant, yet festive holiday experience - without the North Pole weather! Santa, Mrs. Claus and their elf, Kandy Kane, return for their annual holiday vacation to Santa’s favorite resort as part of the resort’s holiday season celebration.

On select nights, the new Santa’s Village experience will give the young and young-at-heart a chance to experience the sights, scents and sounds of the holidays. Playful elves will host socially distant reindeer games and guests will enjoy specialty drinks from Santa’s ho-ho-hometown in the hotel’s restaurants, take part in holiday cookie decorating and meet and take socially distanced pictures with the big man himself.

The full slate of Walt Disney World Swan and Dolphin Resort holiday activities can be found at SantasFavoriteResort.com.