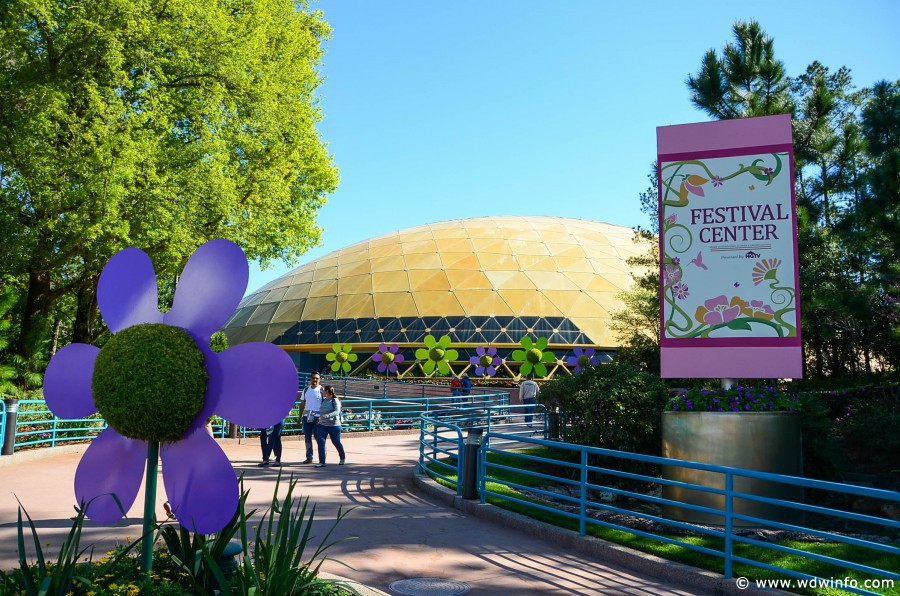 An interesting discussion regarding the future plans for the Festival Center in Epcot is taking place over at DISboards.com and I thought I’d share some of the comments and ask you guys to share your thoughts here.

The buzz on the thread is that the location in Future World could eventually be turned into the space-themed restaurant that was announced at last year’s D23 Expo by Walt Disney Imagineer Tom Fitzgerald. Some details and concept art was shared on the upcoming space-themed dining establishment that would be located adjacent to Mission Space.

The majority of our posters are saying the building is way too big for one restaurant, but if you look carefully at the concept art above, the shape of the building makes it perfect for the curved windows that were said to have spectacular views from high above Earth. Also, to the left of the image, you can see bartenders and the kitchen might be located behind that area filling up space in the middle of the restaurant. Maybe there will be a lounge of some sort built above the restaurant since the ceiling in this image appears to be flat rather than domed like the top.

Poster ‘KYMickey‘ says, “I know that this idea has been discussed previously and shot down but the longer we go without seeing any construction starting for new building for the restaurant and the amount of work going on in the old WOL (former Wonders of Life) building does have to make you think about it again. You would think that we would’ve seen the beginning of some work at least by now. I received we don’t know anything definitely but….”

‘maverik85’ says, “I agree that WoL is too big for just a restaurant but they could possibly put it in there with another attraction or two like The Land pavilion is set up. Have GotG (Guardians of the Galaxy) and Mission Space on either side so could just make that whole area space themed.”

Other posters such as ‘Phicinfan‘ are saying that the restaurant is going to be in between Test Track and Mission Space so the former Wonders of Life pavilion would not work.

“Sorry, this has been shot down by multiple insiders, and the space restaurant is going between Space and Test Track.”

Let us know in the comments what you think about the speculation and what the future could hold for the Festival Center or stop by the thread entitled, “Former Wonders of Life Pavilion to house new space-themed restaurant” on the Disney Rumors and News forum at DISboards.com.

Editor’s Note: The image at the top of this article is from the 2014 Epcot International Flower and Garden Festival.