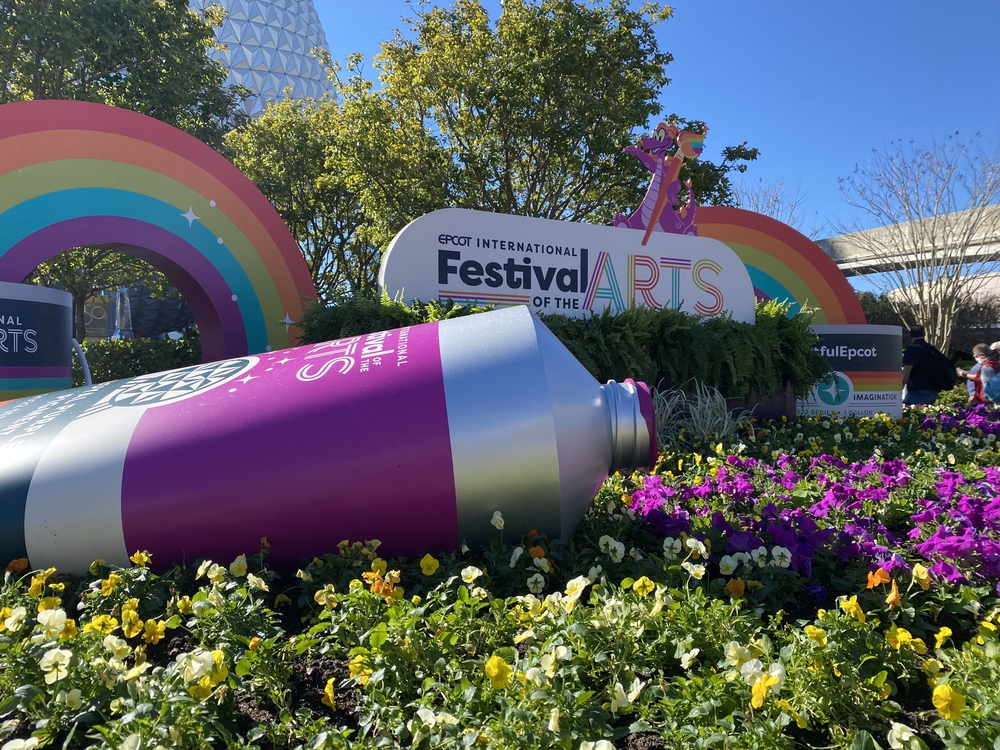 January 14th of 2022, the Epcot International Festival of the Arts officially started and filled the park with all kinds of art. Going opening weekend can feel magical, insane, or even both simultaneously.

I feel like one of the not-so-great parts of opening weekend is that it’s crowded because so many people want to be part of the opening weekend hype. This festival is my second favorite festival, and I feel that this one stands out in so many ways. One of the ways it stands out, in my opinion, is having different Broadway performers come to sing at the America Gardens Theatre and many other entertainment options. This weekend was also a holiday weekend to celebrate Martin Luther King, Jr. Day, which is something that can impact the crowds.

I attended the festival on Saturday, the second day of the festival. I was able to try some food and walk around the festival. The first thing I noticed was the crowd level. Crowds are nothing new here at Walt Disney World, but recently I have seen an increase in crowds that remind me of pre-pandemic times. Of course, the majority of the crowd was in the World Showcase because that is where most of the offerings are located.

My first stop at the festival was The Deconstructed Dish. This is my favorite booth each year because the dishes look picture perfect. I recently became a vegetarian, so the only thing I could eat at this booth was the Deconstructed Key Lime Pie, and I am not mad about it. In 2021, I fell in love with the Deconstructed Strawberry Cheesecake, and all year I looked forward to having that again. When the menus were released, I was sad to see that my favorite dessert had been replaced. Once I tried the key lime dish, my feelings changed. I am in LOVE with this dessert. First of all, it is way more visually pleasing than the strawberry cheesecake dish, and it indeed looks like a piece of art. If you enjoy Key Lime Pie, I strongly recommend getting this dish if you are visiting the Epcot International Festival of the Arts.

The second food item I got was the Plant-based Bratwurst from the Refreshment Outpost between the China pavilion and the Germany pavilion. I have tried this dish before, but I wanted to see if it improved or worsened. I can say this is not a lipstick-friendly food option. The bratwurst has many different toppings, including coffee barbecue jackfruit, vegan coleslaw, and a spicy turmeric aioli. My only critique is that the aioli wasn’t spicy, or at least I couldn’t pick up on the spice mentioned in the description. I also wish the dish was warmer. I think the slaw on top cools the plate down. Either way, it was good, and it’s an excellent option for our vegetarian and vegan friends.

Other than ordering food, I also watched some entertainment. I saw Art Defying Gravity between the two stores at the entrance of the World Showcase. This show was fantastic. It’s impressive to see such outstanding performers doing acrobatic tricks and creating art with their bodies. As a dancer and a dance teacher, I love to see performing arts be a part of this festival. Some of their tricks had me holding my breath, and all the spectators around me were in complete awe. Art Defying Gravity performs several times a day at 11:00 am, 11:45 am, 1:15 pm, and 2:45 pm. After enjoying this entertainment, I visited the chalk artists since I saw they were out. Watching them create these breathtaking pieces of chalk art is very calming. There is just something about watching them and being away from the crowds that brings a sense of peace while being in a busy theme park. It’s almost therapeutic. Many of the art booths were busy, so I couldn’t enter each booth, but I guess I’ll have to go back. The art that I did see was stunning. These artists are out of this world.

There is so much to experience at this festival that it’s hard to see all of it in one trip. This festival only lasts until Sunday, February 13th. With this festival only being a month long, unlike the other festivals that last much longer, I feel it’s harder to do everything. I plan on going every weekend until the festival ends to do as much as possible and try as many different foods as I can. Even with the crowds and the 5-hour wait for the Figment popcorn bucket, it was a very successful opening weekend. I hope the line for the popcorn bucket goes down because I want the grilled cheese from the Pop Eats! booth before the festival ends. I highly recommend going to Epcot’s International Festival of the Arts.

Which Epcot festival is your favorite? Let us know in the comments.