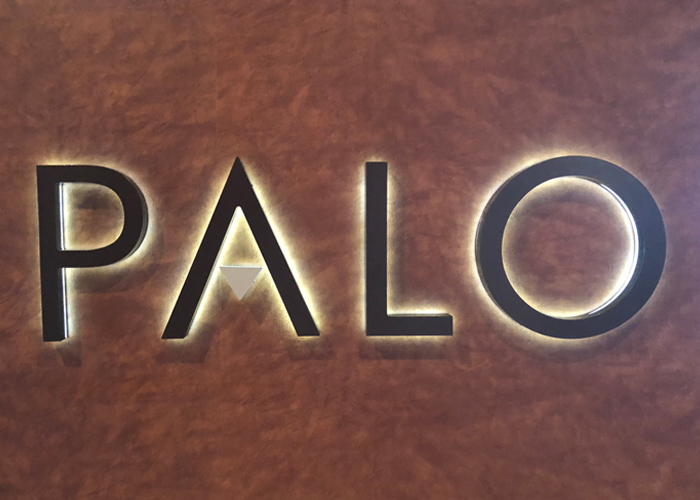 Palo is one of the two fine dining adult-only eateries on the Disney Cruise Line ships. Serving Italian cuisine, Palo is a favorite among many veteran Disney cruisers. On cruises that are 4-nights or longer, Palo offers a brunch on at-sea days. This is a coveted reservation, so if it is something you are interested in, be sure to book it as soon as you can. Palo brunch does come with an additional charge of $30 per person. Palo is ornate and sophisticated, with large windows that provide a panoramic view of the ocean. Along the back wall of the restaurant, there are paintings of Italian landscapes and landmarks.

Palo is decorated with dark woods, deep reds, and small gold accent pieces. The seating is a mixture of tables and booths. There is red carpeting near the windows, and toward the back of the restaurant, it is on a slightly elevated wooden platform.

During Palo Brunch, the restaurant’s atmosphere feels different than dinner simply because the lighting is so much brighter during the day. Without the dimmed lighting the restaurant doesn’t feel as warm and elegant. Admittedly, this criticism is extremely inconsequential to the dining experience and certainly shouldn’t deter anyone from wanting to try brunch at Palo.

Walking into brunch you are immediately directed towards the back of the restaurant, where there is a three-tabled buffet of meats, cheeses, pastries, smoked salmon, crab legs, and so much more. Surrounding the three tables was the wafting smell of cinnamon buns, which were sticky, sugary, and exactly what you’d ask for out of the perfect cinnamon bun. This was an impressive presentation of food. While we were looking at the buffet the chef came out of the kitchen to talk to us about what was available. Everything from the buffet was delicious, and it was so plentiful that just this alone could have been an entire meal for some guests. When we returned to the table, those who drink alcohol were given a complimentary mimosa. The mimosa itself was a moderately heavy pour on the champagne and light on the orange juice — no one seemed to complain about that.

After our buffet starters, the server then gave us our menus. The brunch menu features soups, waffles, pancakes, eggs, pizza, and then a list of Italian cuisine entrees including Pennette Pasta, Rollantini Melanzane, Veal Saltimbocca, and more. I opted to try both breakfast and lunch options from the menu. To start I had a Strawberry Mickey Waffle. It tasted a whole lot better than the standard Mickey Waffles you’ll find at Walt Disney World quick service locations. It was light, fluffy, and certainly scrumptious. There were several entrees I wanted to try, so I split a couple of them with my co-worker Tyler Crouch. We had the Artichoke Ravioli, the Parmesan-Crusted Chicken Breast, and the Lasagna Bolognaise. The Artichoke Ravioli was probably the most disappointing dish throughout the meal. It wasn’t that it was repulsive, it was just very heavy on the artichoke. The ravioli needed a bold sauce or something to help cut through the artichoke flavor a bit. The flavor profile of the dish was bland. The Artichoke Ravioli needs some reworking in the kitchen because as someone that like artichokes I was fairly disappointed. The Parmesan-Crusted Chicken Breast was superb. Our server told us it is the only item to remain on the menu since the first Palo opened, and it was easy to understand why. While it was a slightly small cut of the chicken breast, it was packed with flavor. The cheese on top was melted perfectly with small golden brown bubbles. It was savory, and what I liked the most about it was that it wasn’t over-complicated. There weren’t any twists or tricks, and I assume no secret ingredients; it was Parmesan-Crusted Chicken Breast prepared perfectly, and that’s all it needed to be. Lastly, I had the Lasagna Bolognaise. It was slightly rich, but in all honesty, I was getting full at this point, so I don’t know exactly how fairly I can review this dish. It seemed to be slightly above average lasagna, but again, this dish may have been much better if I had had it before everything that was on the table.

The service at Palo was exceptional. If we weren’t certain what we wanted from the menu, in a short matter of time our server was able to make a couple suggestions based on our preferences.

There is a certain level of friendliness you expect from Disney cast members, but everyone at Palo was exceptional. You could see the sense of pride these cast members had in their jobs, and the dedication they have in providing the best service. As a guest, this makes the meal feel so special. You get the sense that your server truly cares about how well you are enjoying your meal, instead of just going through the motions.

When some members of the party were unsure what they wanted to order, our server suggested that we order more than one entrée at no additional cost. This service really improved my experience because I would have originally only ordered the Artichoke Ravioli, which ended up being my least favorite dish during the meal.

Top notch service and a beautiful atmosphere were all part of the experience when eating brunch at Palo. In our video review, I was more forgiving and outwardly praised the meal, but looking back it wasn’t the must-do experience I made it out to be. I prefer the food at Palo for dinner, which is the same price, but at the moment I think I got wrapped up in the excitement and was too generous in that review. If you’ve been on one or two Disney Cruises and have never experienced brunch at Palo it is something I’d recommend, but there are a handful of experiences on the ship that I’d personally rather spend my money on. While $30 per person is a good deal, that money can be better spent on other dining options, in the spa’s Rainforest Room, or on a few adult beverages.

This change of heart really proved to me the importance of writing these review. It gives us the opportunity to look back and give a more objective review that isn’t swept up by the excitement that comes from being in the moment.

Parts of brunch at Palo were tasty — I think the Parmesan-Crusted Chicken Breast was delicious and the hors-d’oeuvre buffet was an impressive spread — but the entire experience wasn’t a home run for me. There were a few things I felt let down by, like the Artichoke Ravioli, and while the Parmesan-Crusted Chicken Breast was my favorite at brunch I wouldn’t have put it at the top of my list on the dinner menu.

While everything at brunch was first-rate, it felt more relaxed than dinner at Palo. Some can view this difference as a positive thing, while others could view this as a negative thing. Those who prefer brunch likely favored the hors-d’oeuvre buffet and the slightly more casual atmosphere. I preferred the dinner; I think Palo dinner has better food and the atmosphere feels more elegant at night.