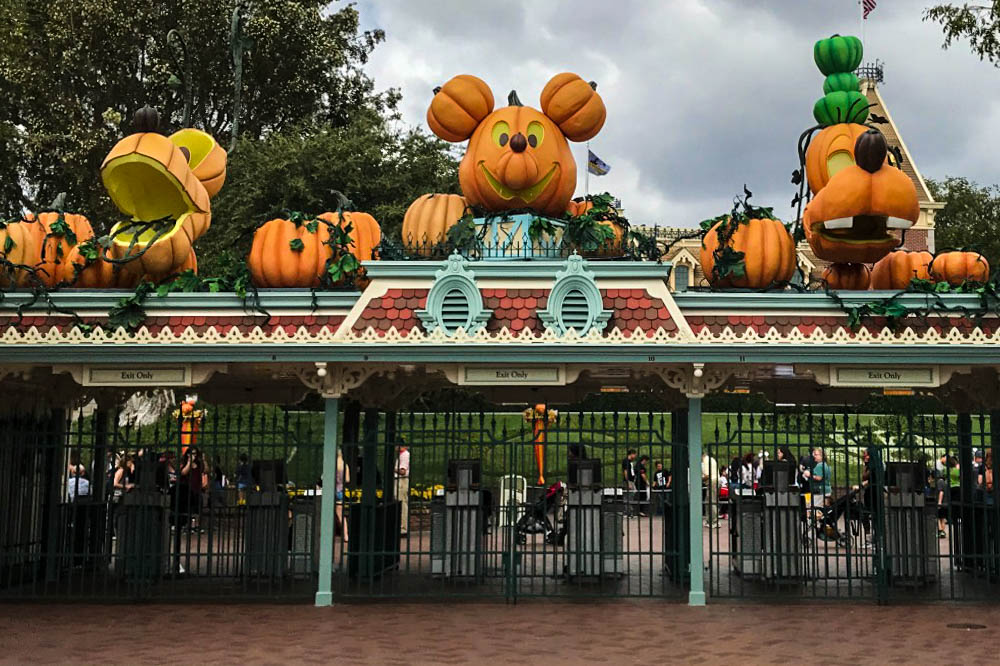 Editor’s Note: This article was originally written in 2018, but we think it’s a great discussion to bring up again right now with the current situation.

It is presently August 21st as I write this. The first night of Mickey’s Not-So-Scary Halloween Party took place last Friday night — on August 17th (not a misprint). Let that sink in for a minute. Labor Day, the unofficial end of summer for many people, is still almost two weeks away. Most kids still have not yet gone back to school, many families are still gearing up for their annual summer vacation, and a look at the thermometer most certainly does not suggest that pumpkins and sweaters are anywhere close to being in season for most of the country. In an article I wrote around two weeks before Halloween last year, I pleaded for Disney not to decorate the parks for Christmas until after Thanksgiving — or at least to wait until people have finished their Halloween candy. So here I am again, asking Disney once more to respect the magic of the fall and winter seasons by not overexposing all of us to decorations so early.

There are several reasons for Disney not to decorate the parks for Halloween until at least the second half of September. The spirit of Halloween in most parts of the country comes alive as the leaves begin to change colors on trees, the temperature drops to more comfortable and chilly levels, and summer is far behind in the rearview mirror. For kids who are in school, the first few weeks are filled with new classes and teachers, getting back into the swing of an academic year, and the beginning of the football season. The Halloween season does not begin in earnest until October, or the last week of September at the earliest.

With families still flocking to Walt Disney World for summer vacation, Halloween decorations at the Magic Kingdom seem to signal that summer is long gone and that tests, homework, and projects are about to be in full swing. This could be disheartening to children who were hoping to soak up another week or two of fun in the sun before going back to school. Furthermore, the magical atmosphere of All Hallows’ Eve simply does not exist in August. How can someone be expected to be fired up and ready for trick-or-treating before they have gone to the store for fresh notebooks and other school supplies? Disney has been able to harness the power of Halloween because of many of its movies; the theming around villains having a large role in creating a spooky atmosphere in the fall is great, but the same feeling is not present in the summer months.

I know what people are thinking as they read this.

Many will call out the fact that Disney is a profit-seeking corporation that will do whatever it thinks will increase the bottom line for quarterly revenue reports. Expanding the Halloween season enables the company to roll out specialty drinks, food items, and merchandise for which a higher price can be charged because of the items’ seasonal nature. Also, if people are willing to buy tickets for MNSSHP, Disney should be able to make as much money as possible from those events by having more of them during the year. These are all valid points, but the argument of this article is for Disney to have a little heart when planning their holiday seasons, because the company is walking a fine line as a corporate leader and the dominant worldwide force for theme parks when it comes to its decorations.

Many will also argue that families want to see the decorations for Halloween but are unable to make the trip to Orlando in October because of schools being back in session and the fall season actually being in full swing. That seems like a good argument for extending Halloween into the end of the summer, but the same argument could then be made for the parks to be decorated for various holidays year-round; if families can only come to Walt Disney World during the spring break period in March and April, shouldn’t they be allowed to see the Halloween or Christmas decorations on display throughout the parks? Of course not, because they are coming in March. The same answer goes for the question of early Halloween. The decorations should not be up in August — because it’s August.

If other parks catch on to the idea of having special events out of season (as Universal is beginning to do with Halloween Horror Nights), where does it end? Christmas beginning in October and overlapping with Halloween for two weeks? The creation of a park dedicated to year-round holiday celebrations? By decorating the parks for Halloween for just a few weeks of the year, the magic of the season is preserved, allowing people to fully immerse themselves in the special time of year without feeling fatigue from all of the commercialization happening around them.

This is certainly wishful thinking, and I fully expect the Halloween season to start earlier and earlier each year as long as Disney is able to increase its profits with more pumpkin spice beverages and special event tickets to MNSSHP. I hope, though, that this article will make some people rethink their ideas of what it means for a special time of year to be just that: special, reserved for a few weeks of the year, and full of real magic for many people who are able to experience the parks when it is cooler than 90 degrees outside.