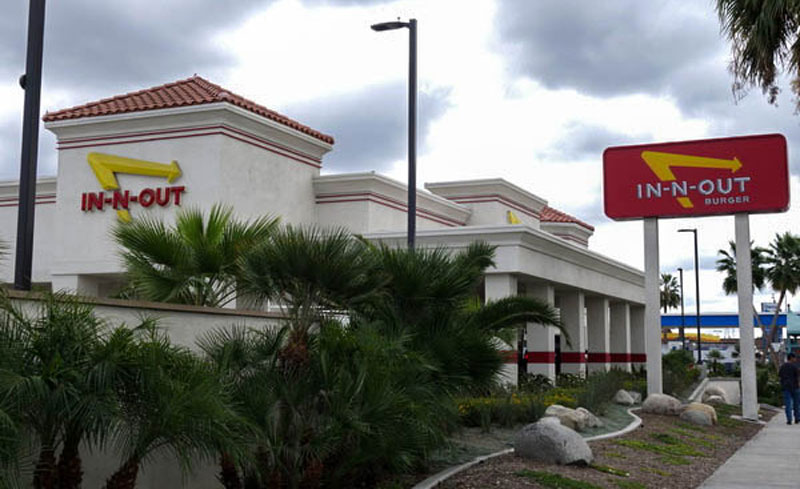 California has an underrated food culture.  Many types of food and food trends became popular in California before spreading to other parts of the country including the french dip sandwich, food trucks, and tacos. Many of the nation’s most popular restaurant chains were founded in California.

There are plenty of great dining options at the Disneyland Resort.  However, you should also use any trip to Disneyland as an excuse to sample some of the food that has become as synonymous with California as movie stars and palm trees.  Here are some of the can’t-miss distinctly California flavors with locations near Disneyland. Virtually any best fast food burger argument will include In-N-Out Burger as one of the top contenders.  While Five Guys and Shake Shack have their followers, do not dare tell a native Californian either is better than the famous In-N-Out double double.  Their large and loyal fanbase leads to long lines often with the drive thru stretching outside the parking lot even during non peak hours.  In-N-Out is as ingrained in California culture as much as Disneyland itself.

Founded in Baldwin Park CA, the current headquarters is located a few miles from Disneyland in Irvine.  The menu is minimal.  Burgers, fries, soft drinks, and shakes.  There is also a “secret menu”  with many options like grilled cheese sandwiches, Neapolitan shakes and a 4 x 4 (4 patties and slices of cheese.)  The seasoned professional will tell you ordering your burger and fries animal style (pictured above) is the only way to go. An only-in-L.A. story, Umami Burger was founded by an aspiring screenwriter in 2009.  It has quickly become the In-N-Out of the gourmet burger scene.  The burgers have thick buns, 6-ounce beef patties, savory Umami sauce and toppings such as oven roasted tomatoes, caramelized onions, and shiitake mushrooms.  These are more expensive than your average burger, but well worth the price tag.

Nearest location to Disneyland: Umami Burger has several locations across the country and even internationally.  At 338 South Anaheim Boulevard in Anaheim, it is approximately 3 miles from Disneyland next to the Anaheim Packing House, which is another great food option.  Hours are 11: AM to 11:00 PM during the week and open until 12:00 AM on Friday and Saturday. The combination of chicken and waffles sounds strange, but it simply works.  The original location in Hollywood instantly became a hit with celebrities and has been featured or referenced in many movies, such as Jackie Brown, Swinger’s and Rush Hour.

In addition to the southern fried chicken and waffles combination, Roscoe’s is also famous for its side dishes.  Mac n’ cheese, greens, red beans, and hot water cornbread are all popular and delicious.

Nearest location to Disneyland: Roscoe’s currently has 7 locations, all in Southern California.  At 2110 S. Harbor Blvd, the Anaheim location is right down the street from the east entrance to Disneyland.  Hours are 8 AM to 11 PM during the week and open until 1:00 AM on Friday and Saturday. While L.A.-based California Pizza Kitchen also has a location in Garden Walk, The Pizza Press gets the nod here as the place to go for pizza in the Disneyland Resort area.  Founded right in Anaheim only a few years ago, The Pizza Press is famous for its build-your-own pizza pie.  Fresh ingredients and a large selection of drinks make this a great place to grab a bite to eat.

Nearest location to Disneyland: The rapidly expanding chain recently opened a location in Celebration for Walt Disney World visitors to enjoy.  At 1700 S Harbor Blvd, The Pizza Press is less than a 10 minute walk from the eastern entrance gate of Disneyland.  Hours are 11:00 AM to 1:00 AM daily. Sprinkles didn’t invent the gourmet cupcake trend, but it made it hip with the Hollywood crowd.  The chain first opened in Beverly Hills in 2005.  It was an instant hit and led to rapid expansion including locations at both Disney Springs in Florida and Downtown Disney in Anaheim.  Besides the numerous celebrity endorsers, it is perhaps most famous for some of its locations having cupcake ATM’s allowing patrons to purchase a cupcake 24 hours a day.

Nearest location to Disneyland: Sprinkles has locations scattered throughout the country including Disney Springs.  Their recently opened location at Downtown Disney in Anaheim is right next to Catal and the Uva bar.  Hours are 9:00 AM to 11:00 PM during the week and open until 12:00 AM on Friday and Saturday.