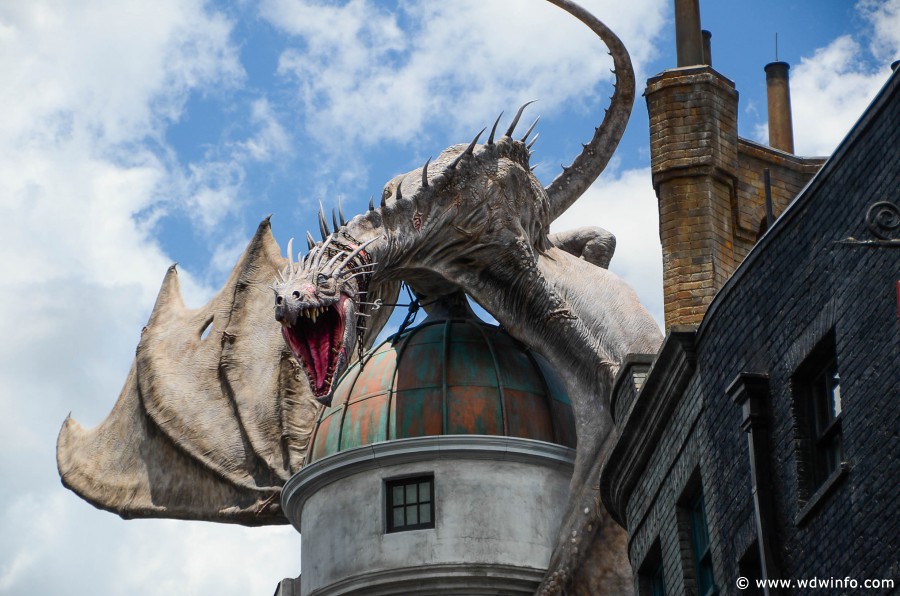 Comparing and contrasting Disney theme parks and Universal Studios is all the rage these days.  I’m going to jump into the debate and present an immersion throw down.  Let’s go straight to the top of each park:  Carsland in Disney’s California Adventure and Diagon Alley at Universal Studios Orlando.

I’m just going to state this as fact: Carsland in Disney’s California Adventure is the most immersive land that Disney has ever created.  Step into Carsland and you’ll feel as if you fell into the golden age of Route 66.

The details here are incredible, just look at two neighboring properties:  Sarge’s and Fillmore’s.  Fillmore’s lawn is very unkempt and scraggly grasses are growing unchecked.  Just across the white picket fence is Sarge’s lawn which is evenly trimmed and bright green, showing that the grass is very well cared for. The curio shop reminds me of a few eclectic shops I saw on my own tour of Route 66. You can spend quite a bit of time just looking at all the clever signs.  The merchandise offerings include tire hats, t-shirts keychains and other kitschy items just like you’d expect from a roadside tourist trap. The Cozy Cone is very creatively done and reminiscent of creative motels on the original Route 66, like the Wigwam Motel in Holbrook Arizona.

There are some great, inventive food options in Carsland.  Flo’s Diner really forces you to step back in time with the food choices:  roast beef and cheddar, turkey dip; of course milk shakes and several different varieties of pie are served as well.

The Cozy Cone offers snacks that are cleverly served in cones.  You can choose from churros, soft serve, chili, popcorn and pretzels.

Though there are several ways to come into the town of Radiator Springs, my favorite is to come in from the side so that you get a great view of the canyons.  Speaking of details, try looking closely at all the rock formations next time you visit and see how many look like something other than rocks.

Throughout the day, Lightning McQueen, Towmater and the firetruck, Red, sporadically drive into town to meet guests.  Once the sun goes down the town’s neon comes to life and guests are serenaded by the song from the neon lighting ceremony in the movie: Sh-Boom.  DJ also comes out at dark and spins some tunes to get guests dancing. Time to switch over to Universal. Diagon Alley is like nothing I’d ever seen.  It is a full, rich world come to life. Full disclosure:  I am a Potter nerd, so this may skew my view a bit. Every product is full on Wizarding World.  In Diagon Alley, you don’t purchase Dasani water, you purchase Gillywater.  There are even potions to add to the water for flavoring.  Pumpkin juice is widely available, as is butterbeer.  Many other drinks were also designed exclusively for the Wizarding World, such as Tongue Tying Lemon Squash, Otter’s Fizzy Orange Juice, Fishy Green Ale and Peachtree Fizzing Tea. Exclusive craft beers are even brewed specifically for the Wizarding World, such as Wizard’s Brew and Dragon Scale.

The Leaky Cauldron is Diagon Alley’s counter service option.  The eatery offers authentic British cuisine like the characters in the books would have eaten.  Options include the ever popular fish and chips, bangers and mash, toad in the hole and various other very British sounding foods.

The merchandise offerings are staggering.  Everything the witch or wizard could ever want from school robes to quidditch uniforms and supplies, to magical pets, to exclusive wizarding world sweets.  The Weasley’s Wizard Wheezes joke shop features many products that were listed in the books such as the decoy detonators and the nose biting tea cup. The buildings are a sight to see.  Just like shops in the real world, the wizarding shops have displays in their windows to give a hint to their wares.  These displays often include moving parts and tons of small details. On the outer walls of the buildings are a multitude of ads for wizarding products. To add even more to the complete immersion 2 shows are offered.  The first is the Tales of Beedle the Bard, a truly unique puppet show experience.  It mirrors the art from the same tale in the first Deathly Hallows movie.  Celestina Warbeck and the Banshees is the second show.  It is not to be missed.  Celestina knows how to own the stage and always puts on a commanding vocal performance.

Every Universal employee has a role to play.  They are witches and wizards, whether they run the shops, the food counters, or wander the grounds helping people with spells or sneering at Gryffindors.

In the end I have to call Diagon Alley the winner.  Both lands give you unparalleled details to immerse yourself in, but only in Diagon Alley are all the shopkeepers and tavern servers actually in on the immersion.  Only in Diagon Alley can you purchase your own wand and perform clever and amusing spells.  You aren’t just visiting the land, you are a part of the land.