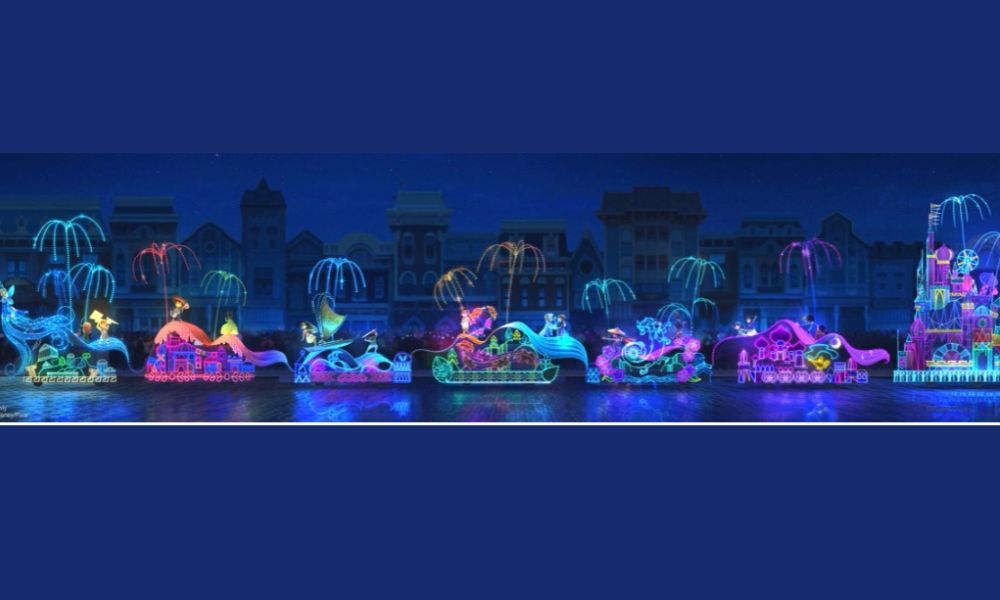 I wish I were writing about a nighttime parade coming back to Walt Disney World, but this is just as exciting because our friends in California will enjoy this nighttime spectacular. Disney just announced that the Main Street Electrical Parade will be returning on April 22, 2022 to light up the streets at Disneyland. I am so happy for our Disneyland friends, but I am still bitter that we do not have a nighttime parade yet at Walt Disney World. Either way, I am happy to see entertainment making a way back into the parks, even if it is not my home park.

The Main Street Electrical Parade will be celebrating its 50th anniversary. The live entertainment team has decided to add new and exciting elements to commemorate that milestone; a brand new finale will be added to the beloved parade. This new finale will include some new characters like Mirabel from Encanto and Raya from Raya and the Last Dragon. Some other characters I saw that will be taking part in this new finale are Moana, Anna and Elsa, Mulan, and the Blue Fairy. The parade should be celebrating its 50th with Walt Disney World to add more to the 50th Anniversary Celebration happening here in Orlando. As they announced, this Disney also announced that Disneyland Forever would be making a return the same day as the parade. World of Color will also be making a return.

They also announced a date for the return of Fantasmic! at Disneyland, which will be May 28, 2022. I wish we could get an announcement on when our Fantasmic! will be coming back. I know they are making some needed changes to the show in Hollywood Studios, so we might be waiting a bit longer for a release date on that. I am excited to see what changes they make to Walt Disney World’s Fantasmic! and what they incorporate in the show. All we know right now is that at some point in 2022, we will be able to see Fantasmic! again.

Seeing these announcements for Disneyland is very exciting because live entertainment is so important, and it adds to the experience. I hope we start to hear more things like this for Disney World. I am excited that the Festival of Fantasy is returning, so the Friendship Faire at Cinderella Castle. I still hope and wish each day that we will get a nighttime parade at Magic Kingdom. In my opinion, nighttime parades are just extra magical and are the best way to end the night.

When do you think Walt Disney World will get an announcement like this? Let us know in the comments!