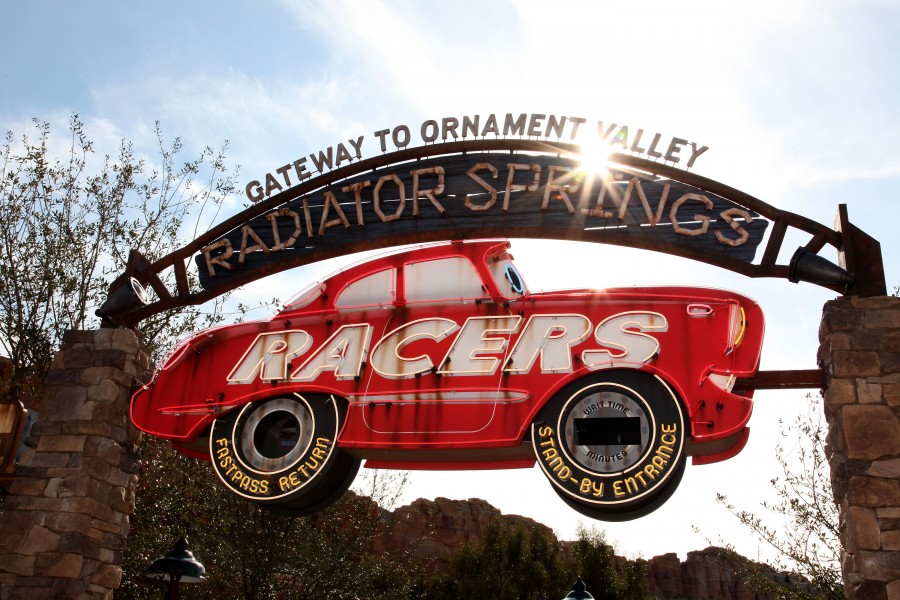 Disneyland queues are hard to judge. Lots of the rides were made in the 1950s. Attendance was not that high so waits weren’t too terribly long. Queues were just very tight spaces with ropes or chains to keep people in their spots. Imagineers just didn’t really think to make the queues that entertaining.  That being said, there are still some outstanding queues in Disneyland. Let’s take a look at a few and try to determine the best queue in Disneyland!

Cars Land opened in Disney California Adventure in 2012. Radiator Springs Racers is the premiere attraction of the land and it has a queue to match!

This queue transports the guest into the grand days of Route 66. You’ll enter the queue near Radiator Springs’ courthouse. You pass under 2 bridges and then you see the ‘naturally’ occurring car fountain and the Stanley’s Oasis water tower. There are some great billboards, advertisements and road signs to occupy your attention. You’ll walk through an old gas station and a building where the walls are inlaid with hundreds of glass bottles. This bottle building can be pretty impressive when the sun shines directly onto one of the walls. Throughout your walk you can catch glimpses of the ride and you remain surrounded by cactus, scrub brush and magnificent rock-work.

All the while as you are making your way through the queue you’ll hear old time music like ‘Riding in my Car’ by Woody Guthrie, ‘Listen to the Rhythm of the Range’ by Gene Autry, ‘Hello, I’m a Truck’ by Red Simpson and many more.

Finally you reach the Comfy Caverns Motor Court, where you’ll enter your vehicle and be on your way.

This queue is so great because it is a continuation of the Route 66 inspired town that you just walked through to get to the queue. There are lots of sign gags and plenty of curiosities to keep your attention while you wait.

Monsters, Inc. Mike and Sulley to the Rescue!

Make sure to take a minute to check out the snack vending machine. My favorites are the simply named ‘Sugar Salt & Fat’ bar and the ‘Bag O’Calories’. The main attraction of the queue is all the gags and hilarious videos. There are many advertisements for the CDA and Harryhousen’s restaurant. One of my favorites is the TV test of the the C.D.E.B.S, or Child Detection Emergency Broadcast System.

There is plenty in this queue to keep you and your kids entertained while you wait to ride.

Built in 1963, the queue is built on an outdoor lanai where guests wait en masse to enter the room. Polynesian gods and goddesses surround the lanai and they all have a story to tell while you wait. Better yet, there are benches to sit on! Which is great after running around in the parks all day. The Tiki Garden preshow features tiki carvings based on the legends of the South Pacific. It starts out with a blow of a horn and the beating of drums. Maui is first up, he performs a water effect and educates the guests on his role in history. Though thanks to Moana, we should all know Maui by now.

Korro, the midnight dancer, speaks to guests as drums beat in the background. Rongo, the tiki closest to the entrance, flies a kite high up in the sky while he tells his story. Pele, goddess of fire and volcanoes, threatens us with her power. Ngendei shakes back and forth as Pele shoots out fire. Hina Kuluua calls forth the rain and makes it fall. Tangaroa-ru calls forth the wind to complement the rain. Tangaroa, the father of all gods and goddesses, appears as a tree and causes his branches and leaves to grow.

Tiki Room fans can enjoy a dole whip while they wait. The dole whip stand has 2 sides, one which opens out onto the main Adventureland thoroughfare and the other opens onto the Tiki Room waiting area. It is a shame that Juan, Jose’s cousin, no longer serves as a barker bird outside to attract guests.

The Tiki Room queue is just a fantastic example of classic Disney.

Indiana Jones is one of the newer rides in Disneyland, having opened in 1995.

The storyline of the queue and ride is hidden throughout the queue. It can be discovered by watching the 3 different newsreels and by discovering letters and telegrams.

It is 1935 in India and Indiana Jones is at it again. This time he has pieced together missing fragments of a map which pinpoints the location of an ancient Bengalese temple. Having been discovered by Indy, the temple is now undergoing excavations.

However, the temple’s deity, Mara, has been making trouble by offering visitors one of three gifts: riches, youth or glimpses into the future. In order to obtain one of these gifts you must never gaze into the eyes of the Mara.

Indy seems to have gone missing during his search for the ‘Jewel of Power’, which he believed to be located in an enormous cavern beyond the Gates of Doom. Sallah has begun giving guided tours in the hopes of locating his friend (and the tourists who have also gone missing).

When the attraction first opened, guests were given decoder cards to decipher hidden messages within the queue. Though the cards are not handed out anymore, you can find the translation of the petroglyphs (symbols) through an online search.

Seeing as you are moving through the temple while walking through the queue, you’ll have to deal with several booby traps. In one of the long, skinny rooms look up. You’ll see many threatening looking spikes above you. Several bamboo poles are the only things that are keeping you from certain doom. If you have a death wish, try yanking on the weakest looking pole. You might get a frightening surprise.

Be careful to watch your step, it might not be the best idea to step on the diamond shaped stones. Once you reach the largest room you’ll be inside the Rotunda Calendar. If you are in a peevish mood, pull the rope leading down into a well and you’ll get a response from Dr. Dunfor Pullit. There are many hidden easter eggs within the queue as well, including crates labeled ‘deliver to Club Obi Wan’ and ‘990 6753’, or the number on the crate which holds the Ark at the end of Raiders.

Mickey’s House opened early in the year in 1993. It is a walk through attraction and is located in Toontown. Mickey’s House is technically the queue that guests pass through to reach the main cheese himself for a meet and greet.

His house is fantastic. Inside you’ll find everything cartoonishly oversized. You’ll get to walk through Mickey’s living room, den, laundry room and backyard.

Some of the more interesting things you’ll see include: a TV playing a classic Mickey cartoon, a picture of Walt and Mickey, the broomstick from Fantasia, Pluto’s doghouse and much more! After you finish your self guided tour through Mickey’s house (it is technically a queue so I wouldn’t walk past anyone, but feel free to hang back and let people pass by as you explore and take pictures), you’ll enter Mickey’s Movie Barn.

In the Movie Barn you’ll see costumes and props from the more famous Mickey cartoons. Inside the main barn area, you’ll be entertained by Mickey cartoons like Fantasia and Steamboat Willie.

And the winner is…Enchanted Tiki Room! I know I’ll get some pushback on this but I just love it. The queue is just a classic. There are animatronics, fire effects, water effects and light effects. You have access to dole whips while you wait. You might just learn a thing or two while you’re being entertained. It was a really close call with Indiana Jones coming in a super close second.

Did I leave your favorite queue off the list?  Which queue do you think is the best?