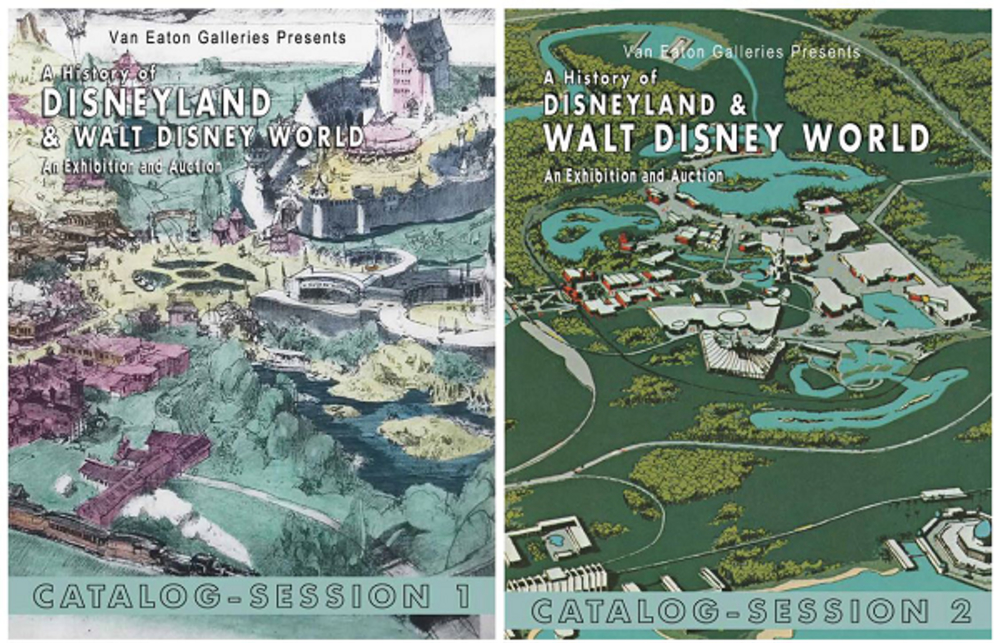 The Van Eaton Art Galleries in Sherman Oaks, California, known as the go-to auction house for Disney memorabilia, is once again auctioning off some incredibly rare items from the Disney parks. The Disneyland memorabilia auction will take place on December 7, 2019, and the Walt Disney World auction will occur on December 8, 2019.

The entire collection, all 1,500 items, is currently on display at the Van Eaton Art Gallery, and is free for the public to view until December 6.

What to feature from each of these auctions is almost impossible as there are spectacular items throughout. However, some of the many highlights include:

A rare WED Imagineering file copy of the 1953 Disneyland Prospectus (estimate: $10,000-$20,000). Not only does something like that not come up for auction very often – the last time one came up for auction was 20 years ago, but this one is from the late Marty Sklar’s estate.

From the 1964-65 New York World’s Fair – a General Electric Progressland Architectural Model (aka the Carousel of Progress attraction). Only 14 of these models were created, and they were believed to be given to General Electric executives. One is on display in the Queens Museum in New York (estimate: $10,000-$15,000).

A fun item is a 2.06 carat round brilliant cut blue diamond awarded during Disneyland’s 60th anniversary celebration. According to the catalog notes, “The diamond was awarded to a lucky park guest as part of the Disneyland Diamond Days Celebration. The diamond has a clarity rating of VS1 and was valued by an independent jeweler at $15,300 and was separately valued by Disney at $19,000. The diamond has an incredibly small hidden Mickey etched into it along with the identification number ‘B002’. The condition is very fine, with the diamond still contained within its original protective box.”

Some of the most treasured items are ones that either Walt Disney owned, touched, used or signed, and there is no shortage of such items in this auction. Two of those special items include an opening day Disneyland guidebook (extremely rare in its own right) signed by Walt Disney (estimate: $7,000-$9,000) and, from Walt Disney’s apartment above the Firehouse on Main Street, a candlestick phone used by Walt Disney himself (estimate: $2,000-$3,000).

Another piece from Marty Sklar’s estate is his personal copy of Walt Disney World’s Background Material (estimate: $500-$700). This 96-page binder was prepared as a background and starting point for Imagineers as they developed Walt Disney World.

For many Disney fans, one of the highlights at Disney’s Contemporary Resort (in addition to the monorail) is the towering Mary Blair mural on the Grand Canyon Concourse level. And this auction features a prototype of the mural Blair created for the resort. According to the auction catalog, “this ceramic tile artwork was originally created by Blair as her pitch to show the process by which she would create the final mural” (estimate: $10,000-$20,000).

According to the Van Eaton Galleries, “this is the largest Van Eaton Galleries auction ever, and it may be the largest Disney Parks auction ever, but we don’t know that for certain. These items are all from private collections. Some items come from former Imagineers or park employees, some come from individuals who have been collecting Disney memorabilia for decades.”

Visit vegalleries.com to register to bid.