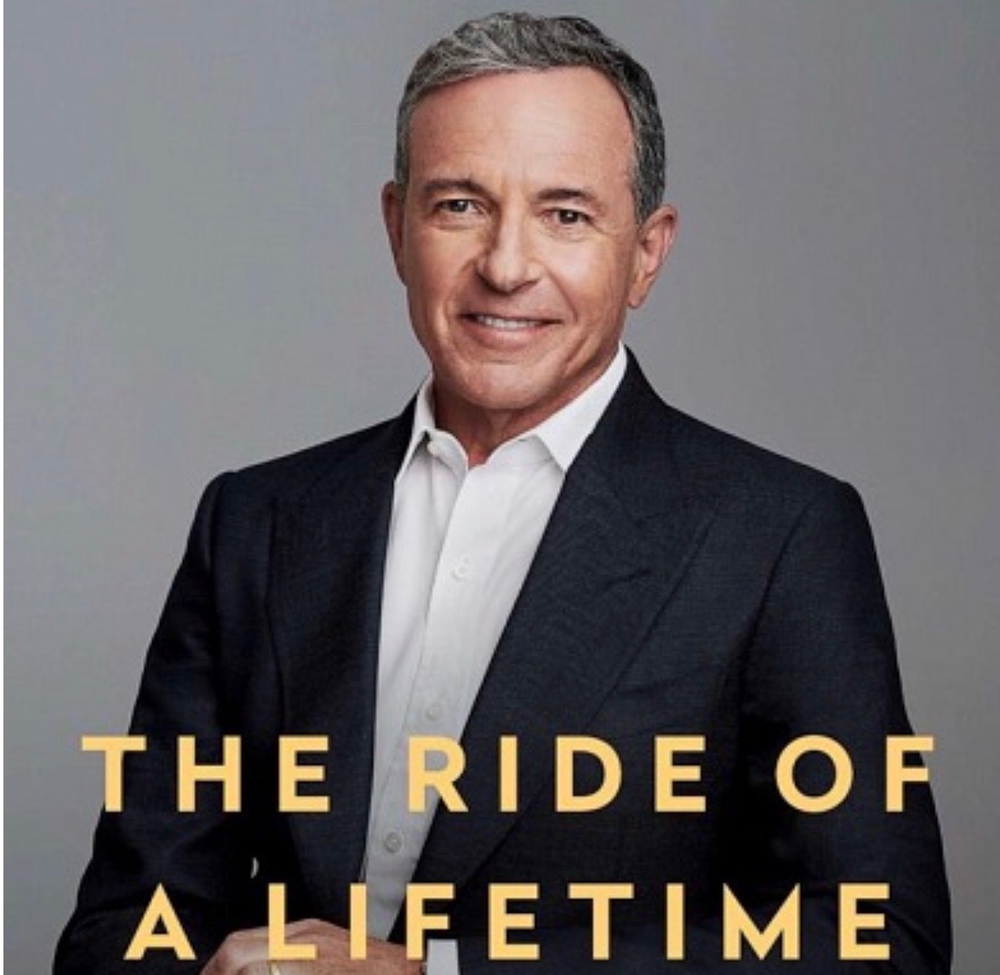 The first sentence of the first chapter of Bob Iger’s new book The Ride of a Lifetime: Lessons Learned From 15 Years as CEO of the Walt Disney Company says, “This book is not a memoir, but it’s impossible to talk about the traits that have served me well over the course of my professional life and not look back…”. And that’s exactly what this book is: part personal, part professional, and part business.

Iger does give the reader a peek into his personal life, but the curtain is only pulled back a bit. He starts out by saying that there are certain things he has always done – in part because of his upbringing. When talking about his parents, he says “as is the case with many of us, those decisions were partially made in response to my parents … In particular my father, a brilliant and complicated man who shaped me more than anyone.” Among the many wonderful and inspiring qualities his father possessed, Iger also talks about his father’s depression. He said his father had trouble regulating his moods. “I later learned that he’d been diagnosed with manic depression, and that he’d tried several therapies, including electroshock therapy, to treat his illness.”

Later on in the book, he talks about an anxiety attack he had in 2005 and how he mistakenly thought it was a heart attack. These are personal and intimate details about Iger, but they are few and far between. Most of the book focuses on the major deals and chapters in his professional life and the lessons learned from running one of the most powerful entertainment companies. Along the way, Iger discusses how he dealt with and handled big personalities like Roy E. Disney, Michael Eisner, Steve Jobs, Ike Perlmutter, George Lucas, Rupert Murdoch and others.

When Disney was in talks to buy Capital City/ABC, Iger was the holdout to sign his contract. He said that Eisner told him later on, “it’s easier to negotiate this $19.5 billion deal than it is to figure out yours.” Iger was hoping to be named number two in hopes it would create an eventual path to CEO, but he decided it wasn’t worth having that fight at the moment. Eisner named Michael Ovitz as the number two, and Iger’s direct boss. Eventually, Iger was offered the position of president and chief operating office, as well as a member on the Disney board, however, on the day before Iger was to sign his contract, Sandy Litvack, Disney’s general council and quasi-COO told him his title would now be executive vice president. Iger said that Litvack also told him that he was not president, not COO, “and the board seat would be eliminated.” Iger told him it was either all or nothing. An hour later, he was confirmed for all three.

When talking about Disney and Pixar, Iger sets the scene when the two companies first worked with each other in creating computer animated features. The original deal called for Disney to coproduce, market, and distribute five original Pixar films. “When the original deal was made,” writes Iger, “Pixar was still a startup, and Disney had all the leverage.” Part of the deal also allowed Disney to create and retain ownership of any sequels from those five original Pixar films. The rift between Eisner and Jobs began with Toy Story 2. According to Iger, the film was to be a direct-to-video release, “but when early iterations of the film demanded more production resources” they decided it should be released on the big screen. Jobs wanted this to count towards their five film deal and Eisner said since it was a sequel, it didn’t count. According to an article in the February 3, 2004 edition of The Baltimore Sun, “Jobs accepted that without raising a ruckus. He was not as conciliatory when Toy Story 3 was planned.” The final straw that broke the Disney-Pixar relationship came in February 2002 when Eisner testified before the Senate Commerce Committee on piracy. Eisner, who was fiercely protective of copyrights, singled out Apple’s recent ads on their “Rip. Mix. Burn.” campaign. The Baltimore Sun reported: “That cut deep,” a source close to Jobs said. “He just thought it was offensive.” When it came time to extend the deal, Jobs put a new deal together where Pixar would control production and retain all sequel rights and Disney would only distribute the new films. When Iger succeeded Eisner, one of the first things he did was repair the Disney-Pixar relationship with Jobs.

Iger talks about how he slowly repaired the relationship with Jobs by first by telling him that he was a huge music lover. “… I had all of my music stored on my iPod,” said Iger. “I’d been thinking about the future of television, and it occurred to me that it was only a matter of time before we would be accessing TV shows and movies on our computers.” Iger told Jobs how great it would be to be able to watch television shows on a computer. “… I wanted Disney to be in front of the wave. I figured the best way to do that was to convince Steve of the inevitability of this idea, ‘iTV,’ as I described it to him [Jobs].” A few weeks later, in Iger’s office, Jobs showed Iger a small device – a video iPod. He asked if Disney would put their television shows on it and Iger said “yes right away.” Five months later, at the Apple launch, Jobs and Iger stood on a stage and announced the product and the deal.

What is even more fascinating with this whole saga is how Iger came around to the idea that Disney should buy Pixar. After months and months of back-and-forth negotiations, an agreement was reached and a deal was made. However, with less than an hour to go before Iger and Jobs announced the deal, it almost fell apart. Jobs pulled Iger aside and the two men went outside. On the Pixar campus, Jobs told Iger that his pancreatic cancer had come back after years of remission. “Steve, why are you telling me this?” Iger asked. “And why are you telling me now?” “I am about to become your biggest shareholder and a member of your board,” replied Jobs. Jobs also told Iger that he needed his “complete confidentiality” with this information. Because of that, Iger couldn’t discuss this with anyone. He had to make a decision right then and there. He decided to move forward with the deal.

Iger also talks about the process he went through acquiring the Marvel Universe, LucasFilms, and FOX. Iger tells how it was to deal with Ike Perlmutter, Marvel’s CEO and largest shareholder, and how Jobs helped Iger seal the Marvel deal even though Jobs didn’t like any of the Marvel films. “When Iron Man 2 came out, Steve took his son to see it and called me the next day,” writes Iger. “I took Reed to see Iron Man 2 last night. It sucked.”

Next on Iger’s radar was Lucasfilm. Jobs asked Iger if there were any other properties he was interested in buying aside from Marvel and Iger told him Lucasfilm. Jobs told him he should call George Lucas. He thought he might be interested. Jobs and Lucas had been close ever since Jobs bought Pixar from him. When Iger and Lucas met, Iger told him of his interest in buying Lucasfilm. Lucas told him he wanted “the Pixar deal.” Iger eventually told Lucas – diplomatically – that his company, for a number of reasons, was not nearly worth as much as Pixar. Dealing with Lucas proved to be difficult, because, as part of the deal, Lucas wanted to retain creative control. Lucas eventually gave in and agreed to the deal – in large part because of an upcoming change to the capital gains tax laws. Disney also purchased the outlines for three new movies that Lucas wrote, however, they were under no obligation to use any of them. They didn’t.

Lucas had a lot of problems with Disney’s first Star Wars movie, Star Wars: The Force Awakens. Iger said that Lucas “didn’t hide his disappointment.” As with other bruised egos – Roy E. Disney, Michael Eisner, and others – Iger wanted to be respectful of Lucas and his legacy. Lucas didn’t want to come to the premiere of Star Wars: The Force Awakens, but Kathleen Kennedy and his wife Mellody, convinced him to come. Iger said, “Among the last things we negotiated before the deal closed was a non-disparagement clause. I asked George to agree that he wouldn’t publicity criticize any of the Star Wars films we made.” Lucas told him that since he was going to be a big shareholder of the Disney Company, he wouldn’t do that. “You have to trust me,” he told Iger. Shortly after that, an interview aired on “The Charlie Rose Show” and Lucas talked about his frustrations with Disney and that “selling to Disney was like selling his children to ‘white slavers.’” Lucas called Iger and apologized for his remarks.

Iger’s final deals – at least for now – were buying BAMTech, FOX, and the announcement of Disney+. Iger also reveals that they were looking at purchasing or building a tech platform. They first looked at Google, Apple, Amazon, and Facebook, but they were too big. The also looked at buying Snapchat, Spotify, or Twitter. They initially decided to buy Twitter, but after they decided that it would be too risky and that they couldn’t control what was being said on the platform, they backed out of the deal.

The book soars when Iger goes into details about something – like his deal with Murdoch and FOX or the acquisitions of the other companies, but there are some noticeable omissions. When talking about Pixar, Iger devotes very little time surrounding John Lasseter’s sexual harassment scandal, and there is nothing about Tom Staggs – who was supposed to be Iger’s heir apparent. As Stephen Galloway writes in the September 27 edition of The Hollywood Reporter, “Nor does Iger say anything significant about the fiasco he faced with a studio in freefall under Rich Ross, who’d greenlit two of the biggest bombs in history, The Lone Ranger and John Carter, a disastrous run that might have warranted a whole chapter. He mentions Ross as one of his ‘big personnel mistakes’ but never goes into the back-and-forth leading to his firing.”

Even though there isn’t much detail about other events that happened during Iger’s career with The Walt Disney Company, it is nonetheless an amazing book and a great insight into one of the most popular, beloved, and important entertainment companies today.

In the October 3rd edition of Time magazine, Belinda Luscombe asked Iger if he had any plans after he retires in December 2021 and Iger said, “Nope. I’m looking forward to waking up and not having a to-do list a mile long.” One thing that we do hope is on his “to-do list” would be a more extensive biography!

The Ride of a Lifetime
Lessons Learned From 15 Years As CEO of the Walt Disney Company
By Robert Iger
Pages: 246. Random House. $28.00