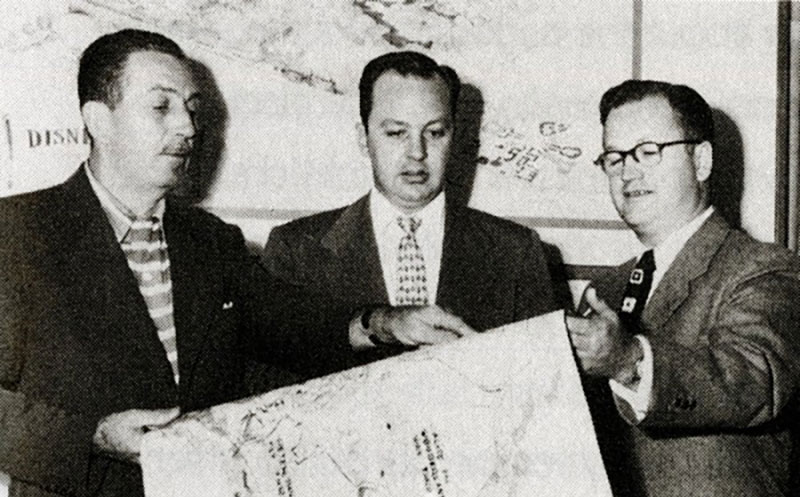 The Disney Brothers, C.V. Wood, and the Making of the Great American Theme Park

Walt Disney is largely credited – and rightfully so – with the vision and creation of Disneyland. However, as many Disney fans know, there were a number of other individuals who played influential roles in the creation of “The Happiest Place On Earth,” including Roy Disney, Herb Ryman, and a number of animators who eventually became Imagineers. There is one person, however, that has been all but erased from Disneyland’s history: C.V. Wood.

In 2016, author Todd James Pierce released Three Years in Wonderland: The Disney Brothers, C.V. Wood, and the Making of the Great American Theme Park, a fascinating look at how Disneyland came to be. Pierce goes into great detail about the planning, financing, and construction leading up to the opening of Disneyland. What is interesting about this book is that it shows just how instrumental C.V. Wood was in helping to make Walt’s dream a reality.

Walt and Roy originally met Wood when they had set up a meeting with the Sanford Research Institute (SRI). At the initial meeting, Harrison “Buzz” Price, who was a research economist in SRI’s Los Angeles office, came with a colleague, C.V. Wood. Price had the technical skills, but Wood did most of the talking. He was considered the “presenter.” Eventually Wood impressed Roy so much that he was offered a position to develop Disneyland. If you don’t count Walt and Roy, Wood was the first employee hired at Disneyland.

Walt and Wood didn’t have a great relationship from the start, but it’s hard to see from Pierce’s book how Disneyland would have ever opened without Wood’s help. He was instrumental in the design and creation of the theme park and, along with Price, responsible for selecting the site.

However, along the way, Walt and the others either knew or had a feeling that Wood did things that were not entirely ethical and honest. In a 2010 interview with Mouseplanet, Bob Gurr, Director of Special Vehicle Development at Disneyland said, “He [Wood] was clearly a con man and certainly behaved that way.”

According to press notes, "Three Years in Wonderland lays out the struggles and rewards of building the world’s first cinematic theme park … The early experience of Walt Disney, Roy Disney, and C.V. Wood is one of the most captivating untold stories in the history of Hollywood."

Many of the stories are well familiar to Disney fans, but through extensive research and interviews Pierce unveils additional details and new stories that makes this book a truly fascinating read – such as things that happened on the opening day of Disneyland. It’s generally known that Tomorrowland wasn’t completed, the asphalt was laid just hours before opening and there were no working water fountains, but Pierce unveils even more mishaps, including a gas leak in Tomorrowland and an entrepreneurial local who set up a step-like ladder near the Frontierland stables and was charging people $5 to scale the wall.

Three Years in Wonderland clearly demonstrates that without Wood, Disneyland probably would have never opened. However, it’s also easy to see why The Walt Disney Company would want to erase all remnants of Wood from their history. Pierce describes how Wood’s relationship with the Disney Brothers slowly deteriorated, he [Wood] resorted back to his shadier days including extortion and arson.

This is an excellent book for Disney history buffs and those interested in Walt Disney and Disneyland. Like a coloring book, Three Years in Wonderland takes the familiar black and white lines and colors them in to present a whole new picture.