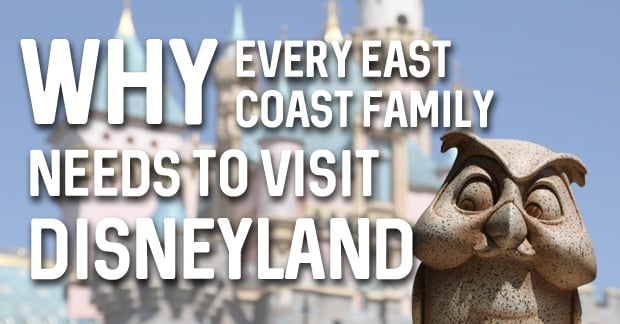 ShareTweetSubscribe
I grew up on the east coast. Every time we went to a Disney park, we went to Walt Disney World. We never even thought about going to Disneyland. Why would we? It was way over on the other side of the country, and besides, Walt Disney World was much bigger. I didn't visit Disneyland for the first time until I married a western girl and we went with her parents on vacation to California. I have to admit, I was skeptical about Disneyland the first time I went. I was convinced I wasn't going to like it. What I found was a totally unique experience that you simply can't compare to Walt Disney World. They may have similarities (like almost a whole park full of them, duh!), but they are definitely different. If you're an east coast family and have never been to Disneyland, you should consider planning your next vacation westbound, and I'm about to tell you why. This isn't your typical "Why go to Disneyland" list. You won't find a list of rides you can only ride at Disneyland California (though there's a bunch), nor will I tell you how close the parks are to each other and Downtown Disney (they are really close). I won't even talk about how Walt's feet touched the ground here (they did). No, I want to take a unique look at Disneyland and highlight some differences in ways that maybe you've never thought about.

1. Your feet won't hurt...as much Like any Disney park, there will be walking involved. But at Disneyland, you won't be walking as much, and that means your feet will hurt just a little less. Oh, if you stay long enough, your feet will still hurt, but it's not that knife-stabbing, can't-stand-it pain you get at Walt Disney World. There's a couple of reasons for this. First, The total amount of land is A LOT smaller. Disneyland and California Adventure total around 150 acres. Walt Disney World parks reach an astounding 1,000 acre total. Granted, most of that is a safari in Animal Kingdom you don't walk on, but you get my point. Disneyland is a lot smaller. The second reason is that you spend less days on your feet. Smaller parks mean you don't need as long to see everything. The average family spends between a week to two weeks at Walt Disney World, if they're international, sometimes longer. At Disneyland, you really only need about 3 days in the parks. You might stick around for a couple of extra days for the hotel experience if you're on property, but you probably won't be on your feet much. 2. Your taste buds will shout for joy Disneyland's food is just better. Why? I don't know, but even the DIS team agreed in a recent podcast. Personally, I think all Disney food is sprinkled with pixie dust. There's just something about Disney food that makes it better than any other restaurant or fast food place out there. Disneyland's counter service restaurants are exceptionally well done. Take a look at the picture posted above. It looks like a table-service meal, right? Nope. That's the French Market's Cajun meatloaf in New Orleans Square at Disneyland. My wife had the Jambalaya and it was even better. 3. Your pockets won't get holes in them Who likes holes in their pockets? No one. Who likes holes in their bank account more than their pockets? Again, I'd venture to say no one. That's why Disneyland is a better vacation than Walt Disney World. If you count just the expenses incurred after arriving, here's a breakdown of package pricing for the average stay. At Walt Disney World, for a family of 4 staying 7 days/6 nights staying at a Value Resort and a Magic Your Way ticket with Park Hopper option, the cost is about $2,600. At Disneyland, since you don't need nearly as long, we're going to price out a family of 4 staying 4 days/3 nights at a Good Neighbor hotel and a 3-day Park Hopper. The cost would be about $1,500. When I went to Disneyland for the first time a few years ago, since we had no kids then, our whole trip, for two of us, cost $700, including hotels. Not bad! 4. You'll get some extra reading done Or crosswords, or napping, or whatever it is you do on plane rides. Those extra couple of hours on the plane are good for something!

Our rainy trip in September of 1994. We were at, what was then, MGM Studios

5. You can leave your poncho at home What's one thing you never go to Walt Disney World without? Your poncho. It is Florida after all. I used to live in Pensacola. During the summer especially, it would rain every day. It might only rain for an hour, and then the sun would come out, but it would rain. Probably the worst time of year to visit Walt Disney World is September. It's easily the wettest month for Floridians, and the only time I've ever been to WDW in September it poured our whole trip. In just about every photo that year, we are wearing our trusty ponchos. The good news is, in Disneyland, you can leave your poncho at home. I've lived in San Diego for about a year and a half and I can count on both hands the number of times it has rained since I've lived here. California is going through a fairly severe drought. Bad for us locals, good for you out-of-towners coming to visit Disneyland. That doesn't mean it won't cloud over, but your chances of rain are pretty slim. Come enjoy the sunshine. 6. Your hair won't go frizzy, ladies This kind of goes hand in hand with number 5. No rain means no humidity. No humidity means a lot of things. Most importantly, it means that it won't be as hot. It could be 80 in Florida and you're dying, ready to just find some cool spot and sit. In California, when it's 80, it's perfect. Oh, and it's 80 most of the year here. Speaking from experience, Florida can get pretty cold. Especially where I was up in the Panhandle. Orlando doesn't get as cold, but the temperature in the winter months can still be in the 40-50s. In California, we've got about 2 weeks of winter. Two weeks where the temperatures drop down into the 40s and the rest of the year is just gorgeous. 7. You won't have to lie to your boss This one is just for fun. Because you don't need as long for your vacation, you can take fewer days off from work. That means you won't have to call in sick to use one of your sick days instead of vacation days just to get an extra day in the park. Summary Are you from the east coast? Thinking about a west coast vacation? Feel free to share your reasons. And those of you who just can't or don't want to pull the trigger on a Disneyland vacation, what's holding you back?
ShareTweetSubscribe