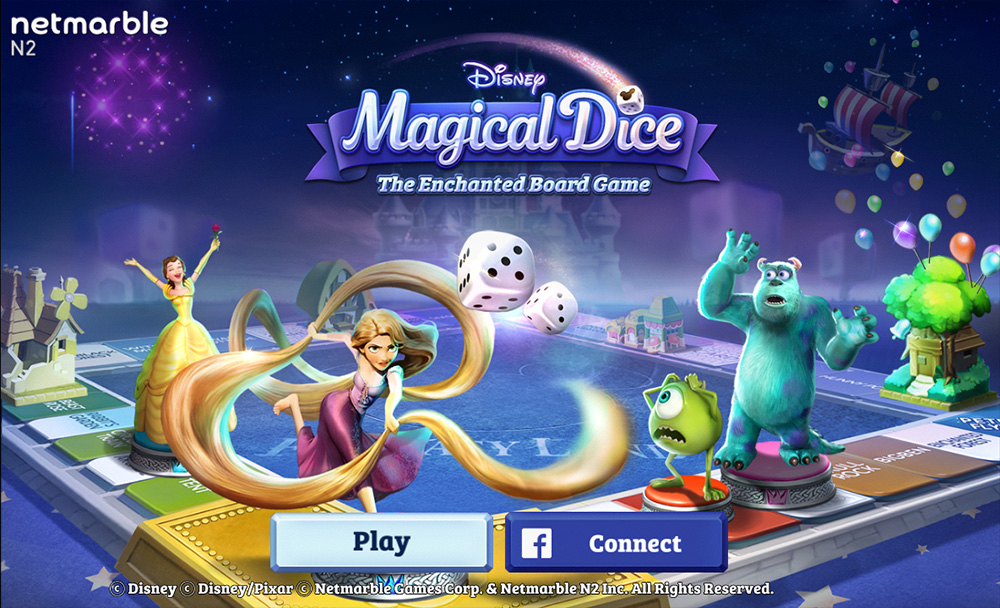 ShareTweetSubscribe
Disney Magical Dice: The Enchanted Board Game is the very first Disney board game available on mobile devices! Journey through magical Disney-style boards as your favorite Disney characters such as Aladdin, Ariel, Winnie the Pooh, and of course, Mickey Mouse in a battle to bankrupt your friends and rule the board. The game itself would be most similar to Monopoly but is MUCH faster paced, and in my personal opinion, is more fun than Monopoly. It features several playing options, 1v1 and 2v2 for multiplayer to play against other people around the world. Saga and Daily Challenge are the single player options. Upon opening the app you will connect to the server, so you have to be able to connect to the internet even if you want to play a single player mode. You enter your name and are asked to choose a Disney character to represent yourself. This can always be changed later, especially as you unlock more characters; this character will be your ‘token.’ The easiest starting point is 1v1 against another player somewhere around the world. The game starts like a Monopoly-style board with spaces like Honey Pot, Circus Tent, or Mad Tea Party. To roll the dice, you will actually use a sliding scale; the longer you hold down the dice, the higher your roll could be. Every few rounds you are given a “magic roll” which lets you choose a range of numbers you would want to roll. For example, if I had a magic roll and needed to move 7 spaces, I would hold the dice button until the scale slid to the number 6-8, in which case I will have a guaranteed roll of a 6, 7 or an 8. When you land on a space you can purchase it and choose to add up to 3 ‘buildings’ on the space you purchase. You can also add a ‘landmark’, which is the highest level you can have on a space. If you land on an opponent’s space, you will have to pay them rent and are also given the option to buy the space from them if you have enough money. Overall, the game is very straight forward, you will continue this process until either you or your opponent are bankrupt. In Saga mode, you will play against a computer character and will have to bankrupt them and also complete objectives like ‘own 2 landmark spaces’ or ‘take a space from another player.’ There are also Daily Challenges that offer a new task each day to keep the game fresh. You can also level up your character which gives them new abilities. For example, if you play as Aladdin and own the ‘Circus Tent’ space, you would receive double rent from an opponent that lands on that space. So the game has enough variety embedded into it to keep each game unique. Games also have a turn limit so they won't drag on forever, which is a huge plus. You can use the money and diamonds you collect in the game to purchase new Disney characters, new dice, and many other things. Obviously, like most games on mobile, you can pay real money to buy diamonds and gold, but it isn’t required to play the game itself. The makers are also generous with the diamonds and gold compared to other games like Candy Crush that rarely give you bonuses for playing. The game is very well made, the graphics are advanced, it has a plethora of Disney Easter eggs and Disney characters to keep any fan satisfied. It’s great for kids while in the car or waiting at the doctor's office or wherever. I would definitely put this game in a ‘time killer’ category because it’s not the type of game you would probably drop everything to play, but you would seek it out while you are out and about or bored. The only real drawback is being required to have internet access to play solo modes, but in this day and age very few people don’t have some form of internet access most of the time. The game is a 'must have' for any Disney fanatic; I highly recommend it, and would say download this game immediately. Disney Magical Dice: The Enchanted Board Game is available on IOS and Android devices and can be downloaded for free from the App or Play store.
ShareTweetSubscribe