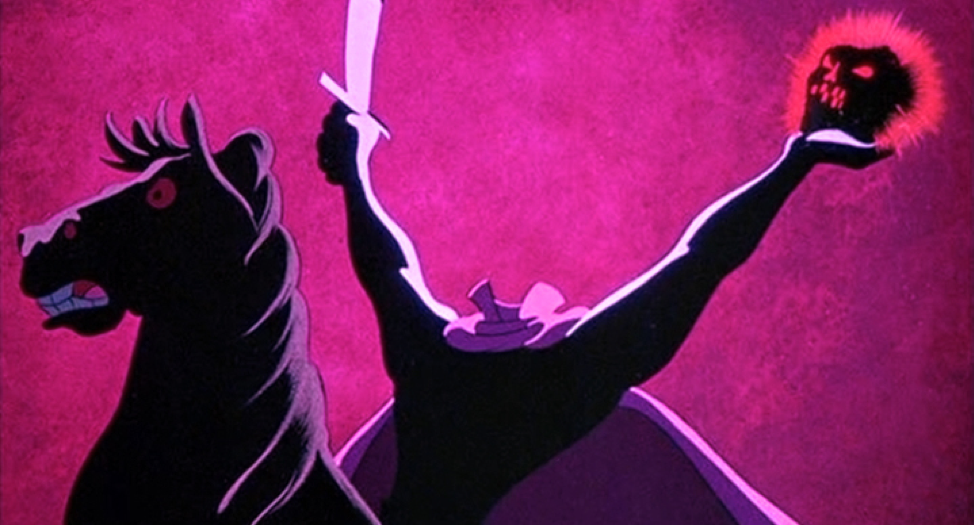 The Headless Horseman is a rather morbid motif in mythology, spanning folklore from the Middle Ages of Europe to the modern day. In the United States, we have come to obtain a fascination with this specter through Washington Irving’s The Legend of Sleepy Hollow, published as part of The Sketch Book of Geoffrey Crayon, Gent. in 1820. The Walt Disney Company’s, and in particular Walt Disney World’s, inclusion of the Headless Horseman in the parks and film has helped contribute to the proliferation of this Gothic masterpiece.

1949’s The Adventures of Ichabod and Mr. Toad features the animated stories of The Wind in the Willows in the first half, and The Legend of Sleepy Hollow in the second. This set exemplifies Disney’s ability to combine stunning animation, clever turn-of-phrase, and sensible musical choices. The second half of concern here is flawlessly narrated by Bing Crosby, and largely sticks to the original story. A reader of either the original story or viewer of the film version is transported into the warm and cozy Hudson River valley, and a primal New York of a bygone era.

The Return to Sleepy Hollow event at the Fort Wilderness Resort and Campground includes a viewing of the aforementioned film, as well as encounters with various ghouls and ghosts — and most importantly, an encounter with the Headless Horseman.

Sleepy Hollow is another nod to Washington Irving. This is a Quick Service food location in Magic Kingdom’s Liberty Square. Delectable delights include the Funnel Cake with Powdered Sugar and the Fresh Fruit Waffle Sandwich. The building in which the dining location is housed is one which really needs to be appreciated by one taking a step back, and observing the superb attention to detail in replicating Washington Irving’s Tarrytown, New York residence, Sunnyside. Of note, The Legend of Sleepy Hollow takes place in Tarrytown, New York; a gorgeous town located about 25 miles north of Mid-Town Manhattan, and as recently as 150-200 years ago was a sleepy out-of-the-way town. Can anyone imagine looking out where the Tappan Zee Bridge is today and seeing nothing but one sloop and the wilderness, as observed by the protagonist, Ichabod Crane (not to mention no bridge)?

The character of the Headless Horseman has been a haunting and terrifying character for several centuries. The Legend of Sleepy Hollow takes place in the 1790 Hudson Valley — an especially dignified region — with New York City to the south, and the Catskill and Berkshire Mountains to the West and East, respectively. For anyone who has visited this region, Irving’s inspiration for a subdued yet emotive setting seems ready made. As does the villain of the Headless Horseman.

Disney has done an excellent job in not overwhelming guests and fans with the Sleepy Hollow story, while also respecting the work of one of the United States’ greatest writers, Washington Irving. The sight of the Horseman will delight thousands of guests during Mickey’s Not-So-Scary Halloween Party (MNSSHP), which starts at Walt Disney World’s Magic Kingdom on August 17th and goes to October 31st (Halloween), 2018. Watching the film, one could not help but to recognize Irving’s prose, and reading the text one can easily see where Bing Crosby was able to obtain the rhythm masterfully utilized in the film. The spirit of the text written in 1820 is respected, and this is an admirable adaption. Hopefully, this understated villain will continue to be the centerpiece as MNSSHP grows, with the addition of new dates for 2018 as well as new experiences on various attractions.

This fascination with the Headless Horseman has been manifested well, during what is becoming an increasingly popular time at Walt Disney World. It is a story which does not take place in a foreign land, or a distant time, but right here in the United States in the eighteenth century. This story, movie, and character transports one to the beginnings of the country, and leaves one wondering: What really happened to Ichabod Crane? Was it a demon of some sort as imagined by Dutch settlers, or Brom Bones in disguise? The Headless Horseman is a villain which will hopefully go on to captivate generations.