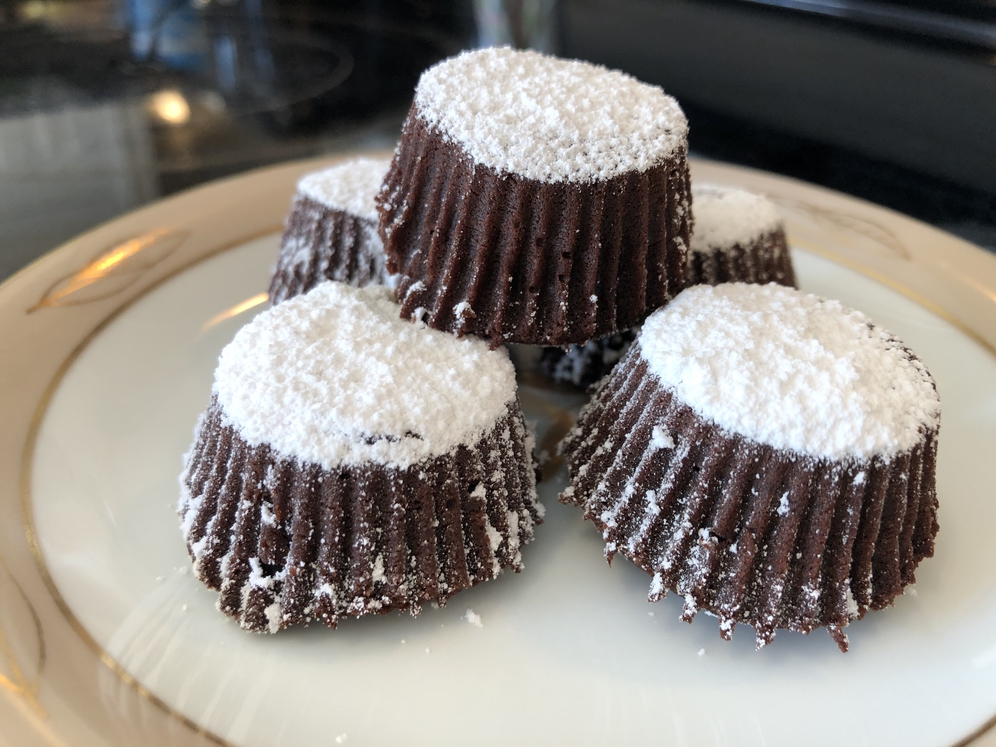 Friends, we’ve successfully made it through another week (and, as a side note, as I originally typed the last six of those words, I accidentally hit the caps key, making it even more of a statement, which somehow seemed appropriate). But we did. We’re here, it’s Saturday, and I’d say that it’s an occasion that calls for chocolate.

In my opinion, some of the desserts that you and I have the opportunity to try on Walt Disney World property may look great on the outside, but fall flat in the taste category. It happens to me plenty. I have such high hopes, only to bite into something that comes up short when it comes to flavor.

This weekend, we’re pulling back out the ever-faithful Ratatouille: What’s Cooking? cookbook, and we’re flipping to the back of the book for a treat that will satisfy any hankering for chocolate you might experience this weekend. And this treat also has a Walt Disney World version, making it a double Disney dessert threat.

Thomas Keller’s recipe for Chocolate Bouchons is the third to last recipe in the cookbook, and is modified from his original to make it more accessible to junior chefs. Everyone in the family can get into the French baking act today, which, in my mind, makes it just that much better. Thomas Keller’s bakery and cafe in New York City is named Bouchon Bakery, so I’d say he knows a thing or two about the subject.

Bouchon means “cork” in French. The batter for bouchons is typically poured into a bouchon pan or mold, making the treats themselves taller. For the Ratatouille cookbook, Keller edited the recipe to say that the batter is poured into muffin liners placed in a 12-cup muffin pan. I decided to try to get them just a bit closer to the original by baking my bouchons in mini muffin pans rather than a 12-cup version. You get to make the call here. I also decided to go with pans I had on-hand, but I’ve eyed a bouchon pan on Amazon, and I might just be ordering one in the near future.

I digress. Back to Walt Disney World and the bouchons that appeared when I was least expecting them. Disney’s Riviera Resort features a lovely little cafe in the lobby, aptly named Le Petit Cafe. As I was covering happenings at the Riviera the week before last, I decided to pop into the cafe and treat myself to a latte.

While standing at the counter, I noticed that bouchons were being offered in a glass cloche alongside other treats. I’d noticed the little chocolate treats before, but that was before Saturday Snacks got started and way before I knew I had a recipe for bouchons sitting in a cookbook in my kitchen cabinet. And, even though I knew that I’d likely be tackling this recipe in the very near future, I talked myself out of getting the bouchons that day. Mistake. BIG mistake.

Fast forward to this past week, and I found myself back on the Disney Skyliner headed to the Riviera Resort. This time, I was getting the bouchons, thankyouverymuch, because I wanted to tell you my thoughts and compare them with our Saturday Snacks version.

The bouchons at Le Petit Cafe are not a Disney treat that’s all bark and no bite. These little babies are decadent, rich, fudgy, and worth every single penny of their $6.99 price tag. The bouchon bar had been set high. Very high.

It’s with those amazing cork-shaped snacks in mind that we roll up our sleeves and belly up to our kitchen counters today. We can do it. Vive la France!

The ingredients are simple, with the most exotic being the kosher sea salt. As you can see in the picture above, we’re going to be using three sticks of butter in this recipe. That should give you a hint as to the level of richness that the bouchons will have. We’ll also be using a full cup of cocoa powder. Sounds like a party to me.

We’ll start off by preheating the oven to 350 degrees and tossing 3/4 of a cup of all-purpose flour into a large bowl.

The flour gets followed up by that cup of unsweetened cocoa powder, part of which will, inevitably, end up on your kitchen counter. It’s just part of using cocoa powder.

Add a teaspoon of kosher salt to the bowl.

Our next step is to melt the 3 sticks of unsalted butter. I cut the sticks in half and placed them in a glass measuring cup. The measuring cup went into the microwave, and I zapped the whole thing for just shy of 2 minutes. Let the butter cool to just slightly warm once it comes out of the microwave.

The recipe calls for the next steps to be done in a large bowl and with a hand mixer. I opted for using my stand mixer instead, but if a bowl and hand mixer is your go-to, go for it.

The three eggs get placed into the bowl, and are followed up with the 3/4 cup plus 2 tablespoons of granulated sugar.

Turn the mixer on to medium, and mix the sugar and eggs until they’re lighter in color.

Once the sugar and eggs take on a lighter color, drop in a half teaspoon of vanilla extract, and combine.

This is when you get to make the call regarding muffin pan size. Like I mentioned earlier, I opted for using my mini muffin pans to get the bouchons a hair closer to their originally intended proportions, but it’s totally up to you. I hadn’t used my mini muffins pans since my kids were in elementary school, so it was fun pulling them out and using them again. And how cute are mini muffin pan liners? They’re so tiny!

I ended up having enough batter for just over three entire mini muffin pans. Thirty-six bouchons should be enough for my hubby and I, n’est-ce pas?

Now it’s time for us to add the dry ingredients and that magical, melted THREE STICKS of butter. Whew. This is where it gets good.

Be sure to stop and scrape down the sides of the bowl as you add the dry ingredients and butter. Repeat the steps until all ingredients are incorporated into the batter.

The last step to perfecting the bouchon batter is to add 6 ounces of semisweet chocolate chips. Just when you think the recipe couldn’t get more chocolatey and rich, it does.

Fill your muffin cups roughly 2/3 full (I used a cookie dough scoop to do this step), and place your pan(s) into the oven.

Because I was using smaller pans, I knew that the baking time would be shorter than the 20 to 25 minutes required for a larger muffin pan, so I stayed close to the oven and did the first toothpick check at the 10 minute mark.

After pulling them out of the oven, I gave them a minute and then transferred them to a cooling rack.

After a couple of minutes, it’s time to flip the bouchons over and let them rest upside down until they’re cool.

Once cool, lift the liners off of the bouchons.

It was at this point where I noticed that, by using mini muffin pans and liners, I had treats that looked like bottle caps rather than corks, which made me smile. Close enough, right?

The last step in the whole shebang is to generously sprinkle your bouchons with confectioners’ sugar.

This step was so much fun, and, as you can see, I didn’t skimp on the confectioners’ sugar.

The recipe calls for the bouchons to be paired with ice cream, if desired. Why yes, Thomas Keller, we do desire, merci.

I asked my hubby to pick up “something chocolate” ice cream at the store, and he brought home the at-home version from a family favorite: NYC’s Serendipity III. If you ever get to East 60th Street in New York, I can’t recommend stopping by Serendipity III highly enough. Bring extra time (there’s always a wait) and bring an appetite. The ice cream creations are out of this world.

The bouchons were a winner. Winner winner chocolate dinner. They are very chocolatey and rich, and are the perfect bite-sized treat.

When (not if) I make the bouchons again, I’ll take them out of the oven roughly 2 minutes earlier to ensure that they’re just a touch more moist. And while the recipe says that they’re best eaten the day of, I can vouch for the fact that they’re also quite good the day after. With an afternoon cup of espresso. Ahem.

Please let me know if you give the bouchons a try! What Disney-themed desserts are you trying these days? I hope that your weekend is filled with beauty, a bit of wonder, and a whole lot of chocolate!

Ready to bring a little bit of France into your kitchen? The recipe is below: