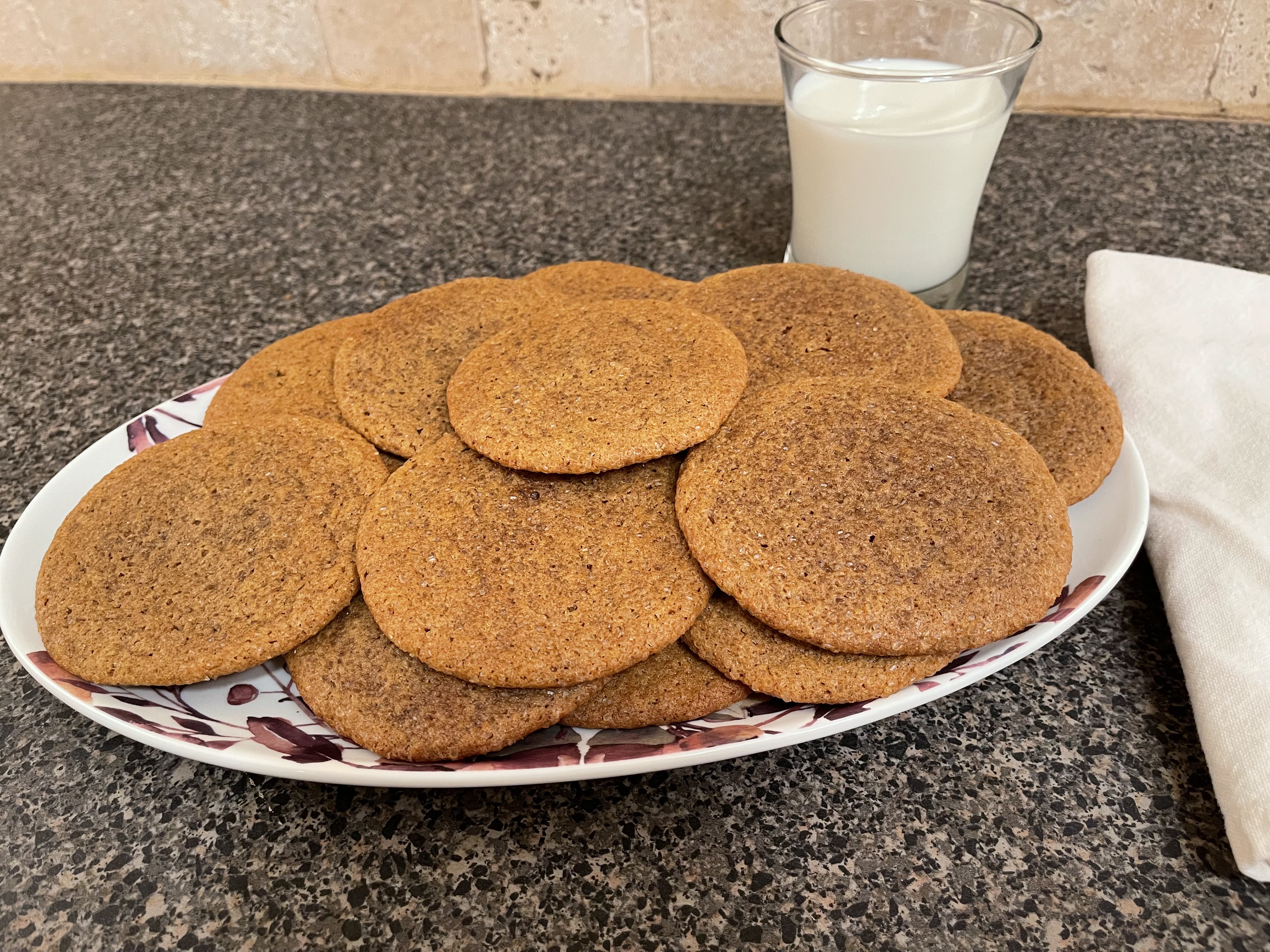 Is there anything more perfect on a chilly winter’s weekend than a gingersnap cookie and a cup of tea? Well, maybe TWO gingersnap cookies with that cup of tea. Just when we thought that perhaps we had made all of the Disney park, Disney-inspired, and Disney-adjacent cookie recipes, MaryLou Jaso, pastry chef at Play Pixar, drops a little magic into the company’s Twitter feed. And just like that, you and I have a little Saturday Snacks goodness to whip up. Thank you, Chef MaryLou, you’re our kind of people.

Before I get started, number one: I hope that your holiday season was lovely. Whether it was quiet or loud or a bit of both, I hope that it was everything that you needed it to be. Second: if you’re new here to Saturday Snacks (welcome!), let me take four sentences to get you up to speed. Saturday Snacks began in February 2020 and was initially supposed to be a weekly article series in which I would share my thoughts about the snacks that I had tried in the Disney parks, resorts, and on Disney Cruise Line. And then the pandemic hit and everything shut down and I was left with absolutely no snacks. I pivoted (yes Ross, PIVOT!) and started making Disney snacks in my kitchen and explaining the steps involved and my overall thoughts about the results. It was a way to connect with Disney when being in the Magic wasn’t an option, and we just kept going once it was. If you want to check out all of the recipes that we’ve made in this space so far, click here.

If you’ve ever sought comfort in a bag of store-bought gingersnap cookies, this recipe is for you. I’ve been there, friends; I’ve been a girl standing in front of that large bag of small crispy cookies asking it to love me. And while the end result of Chef MaryLou’s cookies are different than what you and I will find in that big bag on aisle 5, they are no less wonderful.

It’s a new year and our very first Saturday Snacks recipe of this brand-new year had me doing something I’ve never done before: bake with fresh ginger. Or purchase fresh ginger, for that matter. When I did a little Googling, I found that you and I can grate fresh ginger just like we’d grate anything else, with peeling the ginger root with a knife or vegetable peeler being the first step. I also discovered that it’s recommended that we freeze the ginger root before grating it. I had mine in the fridge because the Publix team has it stored in the refrigerated produce case, and I made the whole stick-it-in-the-freezer discovery too close to baking time for it to really make a difference, so I just stuck with the notion that the fridge would suffice. Friends, don’t do as I did. Place your ginger in the freezer. The internet knows things.

When I started to grate the ginger to get the required 2 teaspoons, I was startled to find that ginger root can be watery. Forgive me but I had no earthly idea that was the case, and I ended up pressing down the fresh ginger as it sat in the measuring spoon in an attempt to drain it just a bit. It worked, but I quickly saw the wisdom in allowing the ginger root to hang out in the freezer before trying to grate it. I was also surprised by how much ginger root it took to get to 2 teaspoons. Get a nice-sized root, and you should be fine.

The other ingredient that was a first for me was Demerara sugar. And it’s still a first, because as the nice Publix team member discovered when he tried to help me find it, my store doesn’t carry it. I once again turned to the internet and was advised that turbinado (raw) sugar would do as a substitute. You just need a larger coarse sugar that has a molasses quality to it. and since that’s what my hubby and I use in our tea and coffee every morning, it was an automatic check on my list. If you have Demerara sugar in your grocery store, go for it. If not, raw sugar will fit the bill just fine.

The dough for this recipe went together quickly. You and I need two bowls (I used a medium-sized mixing bowl and the bowl of my stand mixer) to get the dry ingredients going in one and the wet ones in the other. I just love when cookie dough comes together easily, don’t you? The quicker those cookies get in my mouth, the better. Every minute counts.

Even though the recipe doesn’t specifically tell us to, I placed the 9 ounces of butter on the windowsill and counter to warm up just a bit. Into the bowl of my stand mixer, I placed the 9 ounces (2 1/4 sticks of butter…wow!) of butter, 1 1/4 cups of brown sugar (not the raw sugar, just the standard brown variety), and 1/2 teaspoon of salt, 1 teaspoon of black pepper (another first…and just something you don’t normally see in a cookie recipe), 2 teaspoons of powdered ginger, the 2 teaspoons of fresh ginger, and 2 teaspoons of powdered ginger.

I cranked up the speed on the mixer and ran it until things were creamed nicely. Optimally, you want the ingredients to take on a slightly lighter color and for them to be just a bit fluffy. After creaming the initial ingredients, I added in 1/4 cup of molasses, ran the mixer, and then mixed in 2 eggs. Be sure to scrape down the sides of the bowl. Remind that batter who’s boss.

I placed the required 2 1/4 cups of flour and 2 teaspoons of baking soda into the other bowl and gave the two ingredients a good whisking. I then popped my sifting shield onto the top of my mixer (no worries if you don’t have one, just mix on a very low speed) and began to add the dry ingredients to the bowl with the wet ingredients and spices. I added the flour mixture about a 1/4 cup at a time on the slowest speed.

The next step had me backing up and punting. The recipe leads us to believe that once the dough is completely combined, you and I should be able to grab an ice cream scoop and start scooping dough and rolling balls of it in a separate bowl containing the Demerara/turbinado/whatever-you-can-get-your-hands-on sugar. It quickly became clear that there was no way in the world that that would happen. The dough was much too soft to form into balls much less roll through the sugar and hold their shape.

I decided to pop the bowl of soft dough into the fridge in the hopes that it would help the dough hold its shape. I gave it about 45 minutes, and it was just the thing that was needed. After time in the refrigerator, that dough formed fantastic dough balls, and I took care to get as much of that glorious chunky sugar on that dough as humanly possible.

The recipe asks that we flatten the dough balls slightly, which I did with the bottom of a glass. Spoiler alert: after seeing how flat the first batch came out, I eased up a bit on the flattening for the subsequent batches.

My advice: don’t miss this opportunity to take a nibble of that dough. Yes, I know…you and I shouldn’t be eating copious amounts of raw dough, but I did take a bite and MAN was it good. Spicy and good and WOW I could feel that ginger on the back of my throat. Yum.

I placed the first batch in the oven and hit the timer for 9 minutes. When the timer sounded, it was obvious that more time was needed, and after another 4 minutes, I made the decision to pull them out.

Chef MaryLou’s recipe says that our cookies should be golden brown (they were already golden brown before entering the oven, right?) and that they should be slightly cracked. Friends, after three sheets of cookies baked for various lengths of time, I have to say that those cookies, while lovely, never cracked. Not even slightly.

That being said, what did emerge from the oven was a feast for the senses. Lovely ginger in spades, and just the perfect wintertime cookie.

Did Pixar’s gingersnaps snap? Well, no. They were a softer cookie, and even when I completely forgot about the third round of cookies until they were really, really done, they were still a soft texture. But if you enjoy the warm flavors of cloves and ginger, this is your cookie.

That last round of cookies that I forgot in the oven? I decided not to roll them in the sugar to see if they were a bit closer to a traditional gingersnap.

Don’t misunderstand; the cookies rolled in sugar were so good. The sugar not only adds sweetness but texture, and I enjoyed them. However, I’m always curious while making a Saturday Snacks recipe, and my hunch about leaving off the sugar proved to be true. The sugar just isn’t necessary, and if you’re looking for something that’s a bit more gingersnappy, that’s the way to go.

I have enjoyed so many of these amazing cookies this week. In fact, I’m getting ready to go downstairs and grab another one right now. Whether you have snow on the ground or palm trees blowing in the breeze this weekend, this cookie’s the thing to make your Saturday and Sunday just that much sweeter. And we all need that right about now, don’t we?

May your weekend be wonderful, friends. Happy New Year.

Ready to have a delicious adventure in your kitchen? The recipe for Chef MaryLou’s recipe is below: