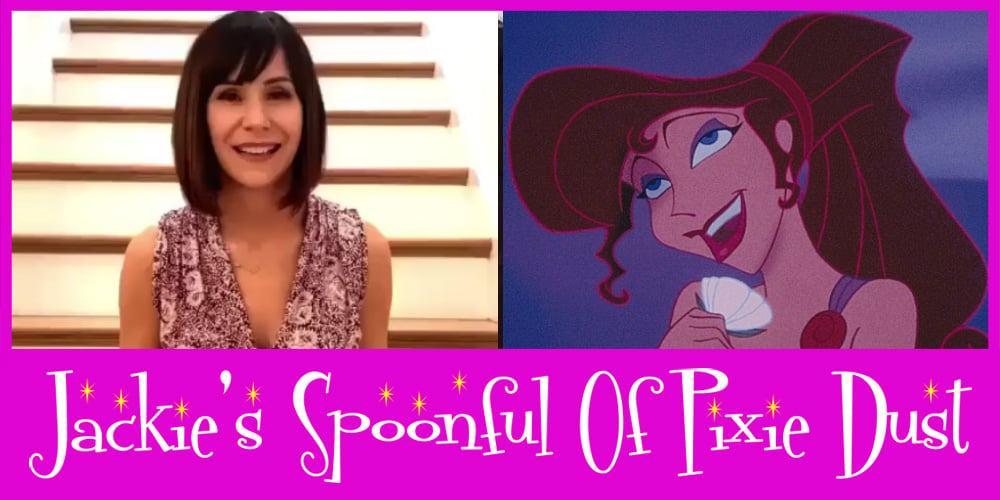 When I woke up this morning, I saw that my friend Susan Egan – the original voice of Belle in Broadway’s Beauty and the Beast as well as the voice of Megara in Disney’s Hercules – had shared a video performance from her home singing I Won’t Say (I’m in Love) from Hercules.

Seeing this performance brought back memories of when I met Susan back in 2011 at an event that was put on by Walt Disney World called the Disney Social Media Moms Celebration. This was no ordinary conference, it was such a special event that was filled with magic from start to finish along with so many prominent speakers who taught us so much. In fact, I met some of the most influential people in my life at these events and learned so much from each of them.

Susan Egan and Georgia Stitt – also a talented musician, songwriter, and Broadway performer – were special guest speakers one year. They came on stage as Be Our Guest was playing throughout the room and glasses of champagne were being passed out. They spoke to us all about being moms – they were both pregnant with their second daughters at the same time – and it was apparent that they were the best of friends.

The date of this particular event was not too long before Mother’s Day that year so we were treated to the funniest performance that I’ve quite possibly ever seen. You can watch The Mom Song performance from the event below; turn your volume up so you can hear all the words and get ready for a real good laugh. We can all use that right now, no?

Now, it’s time to hear Susan as we all know and love her. I’ll admit that I didn’t recognize her name when it was first told to me, but as soon as she started singing, I recognized her voice immediately and now I enjoy her music all the time. She is so full of personality and so very talented.

I’ve included the lyrics to I Won’t Say so you can sing along if you want to! Go ahead, I won’t tell anyone.

If there’s a prize for rotten judgment
I guess, I’ve already won that
No man is worth the aggravation
That’s ancient history, been there, done that
Who do you think you’re kiddin’?
He’s the earth and heaven to you
Try to keep it hidden
Honey, we can see right through you
Girl, you can’t conceal it
We know how you feel and
Who you’re thinking of?
No chance, no way
I won’t say it, no, no
You swoon, you sigh
Why deny it? Uh, oh
It’s too cliche
I won’t say I’m in love
I thought my heart had learned its lesson
It feels so good when you start out
My head is screaming, get a grip, girl
Unless you’re dying to cry your heart out, oh
You keep on denying
Who you are and how you’re feeling?
Baby, we’re not buying
Hon, we saw you hit the ceiling
Face it like a grown up
When you gonna own up
That you got, got, got it bad
No chance, now way
I won’t say it, no, no
Give up, give in
Check the grin you’re in love
This scene won’t play
I won’t say I’m in love
You’re doin’ flips read our lips
You’re in love
You’re way off base
I won’t say it
Get off my case
I won’t say it
Girl, don’t be proud
It’s okay, you’re in love
Ooh At least out loud
I won’t say I’m in love

Well, that was fun! This could be one of my most favorite things that has been shared by a Disney on Broadway performer. Have you been watching these at-home performances? Which one is your favorite? Please let me know in the comments section below!