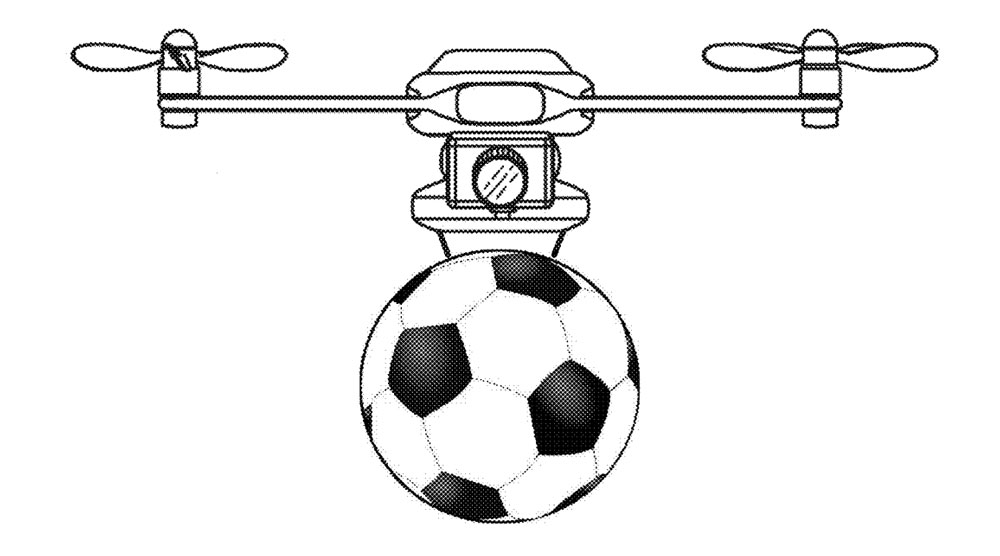 Disney Enterprises, Inc. applies for a substantial number of patents each year. These cover all areas under the Disney umbrella, from theme park attractions, to video games, to information-gathering technology and beyond. With that in mind, here are a few patent applications published this week which show Disney’s wide range of focus. 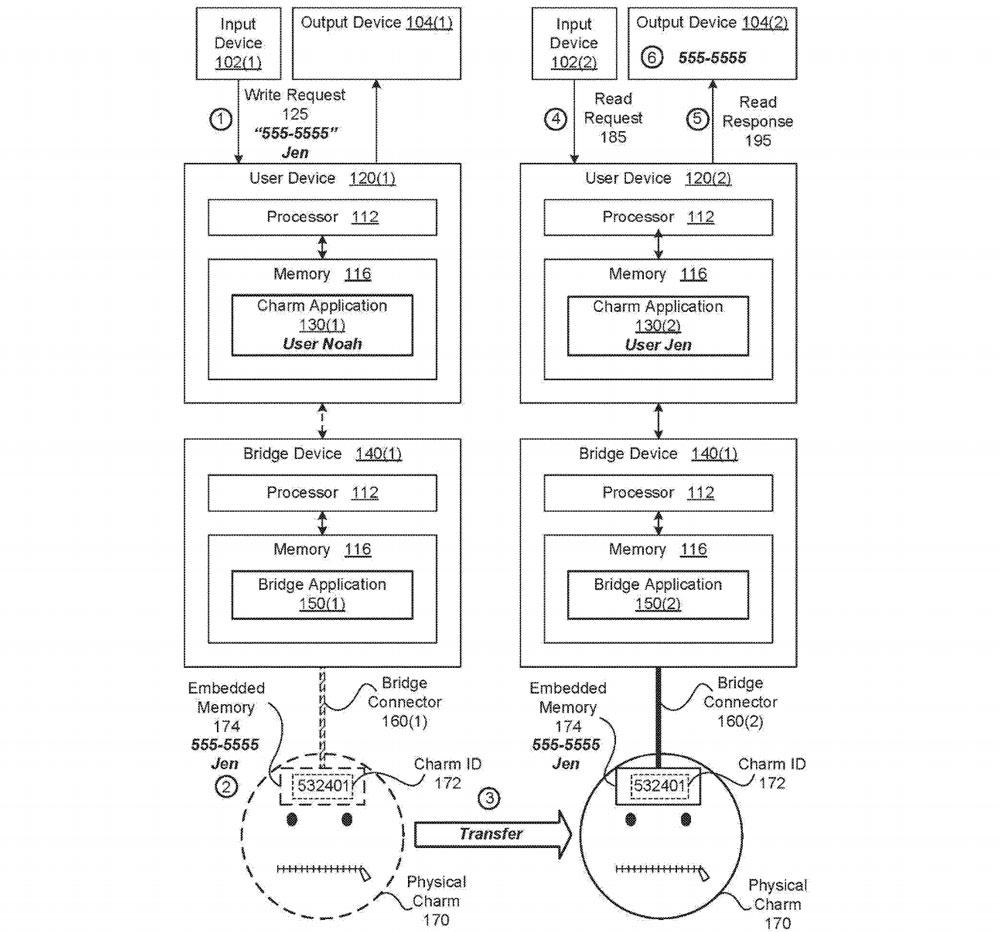 I’ve occasionally wondered whether kids still pass notes in grade school, or if it’s all texting now. As I’m not a parent I haven’t thought a lot about it, but evidently Disney has.

“Techniques for Communicating via Exchanges of Physical Charms” intends to solve a problem almost exclusively relegated to children. How do you convey a discreet message to someone else? You might think to text, but not everywhere has cellular service or internet access. More importantly, not every school allows cell phone use. You may think to scribble your thoughts on a piece of paper, but what if Darren intercepted your communique and found out that you do indeed like-like him. You’d be mortified. As Disney explains it,

One limitation of communicating via a technical infrastructure is that the technical infrastructure may not always be available or accessible. For example, some schools prohibit students from using cell phones during school hours. In another example, cellular networks and the Internet are not always available in remote locations, such as the more remote regions of some national parks.

Disney’s fix is characteristically cute. The company suggest charms — easily manufactured in Disney themes, with emotive Disney character faces — that would store information which could only be accessed by certain users. These charms could be passed in lieu of antiquated tree-meat writing surfaces, so all manner of visual and auditory data could be exchanged.

Users could retrieve the info with a personalized “bridge device,” which in one embodiment would be made in the form of a wearable bracelet that the charm hangs from. Once they’ve got said info, they could access it on any number of devices. Whichever device the owner uses to read it, be it software on an laptop, tablet, or mobile device, will only display the info if the user is recognized as being authorized to read said message. So Darren can’t steal your Olaf charm, take it home, and access an audio recording of you expounding upon his dreaminess.

There is an alternate version of this system which is cloud based. While a physical exchange of the charm would be required, so too would the internet. 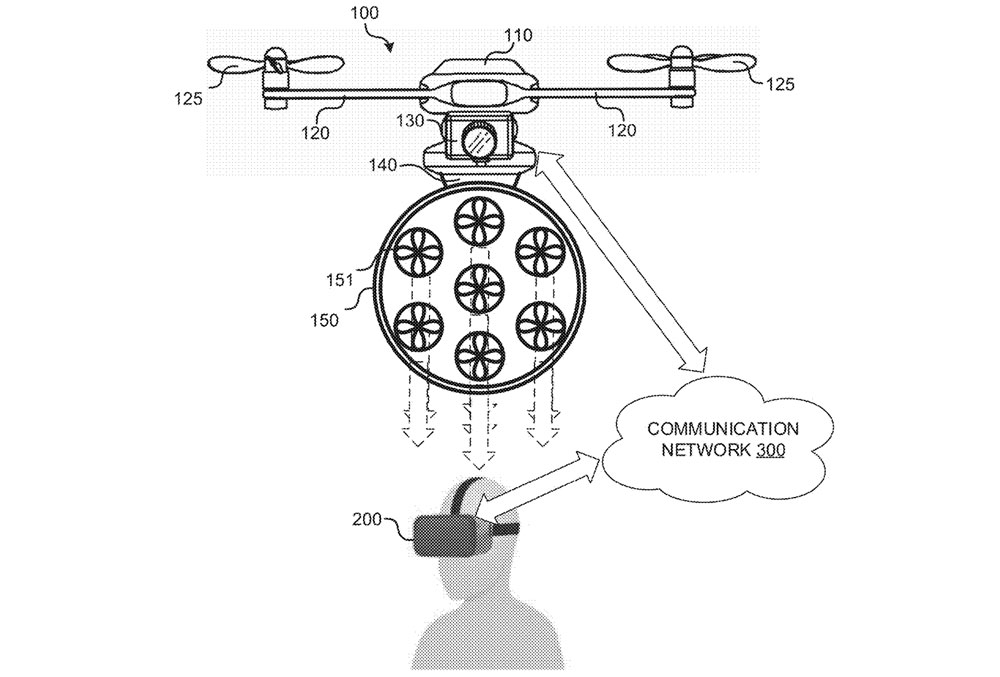 Disney has put out quite a lot of virtual reality patent applications in recent history, and they’ve done a few on drone technology as well. The long-winded “Drones Generating Various Air Flow Effects Around a Virtual Reality or Augmented Reality User” combines the two as part of Disney’s never-ending quest to make VR a more immersive experience than it has been in the past.

While the idea of using drones to simulate a breeze may not sound like it has an abundance of applications at first, Disney could use this technology for a number of immersive functions. For starters, a gust effect could provide extra immersion when paired with a virtual object or effect, such as the document’s examples of “flying bullets, a swinging sword, explosion, moving animals, wind, rain, sports ball, door opening/closing, vehicle, etc.”

Not only that, but when paired with a mister for rain, scent solutions for smells, or a thermoelectric heater/cooler for hot and cold air, the opportunities for use become much more apparent.

Disney could just create VR experiences with built-in functions like this — such as how The Void’s Star Wars and Wreck-It Ralph hyper-reality experiences work — but drones would be able to track and follow the users via a VR headset, so the effects would be up close and personal. 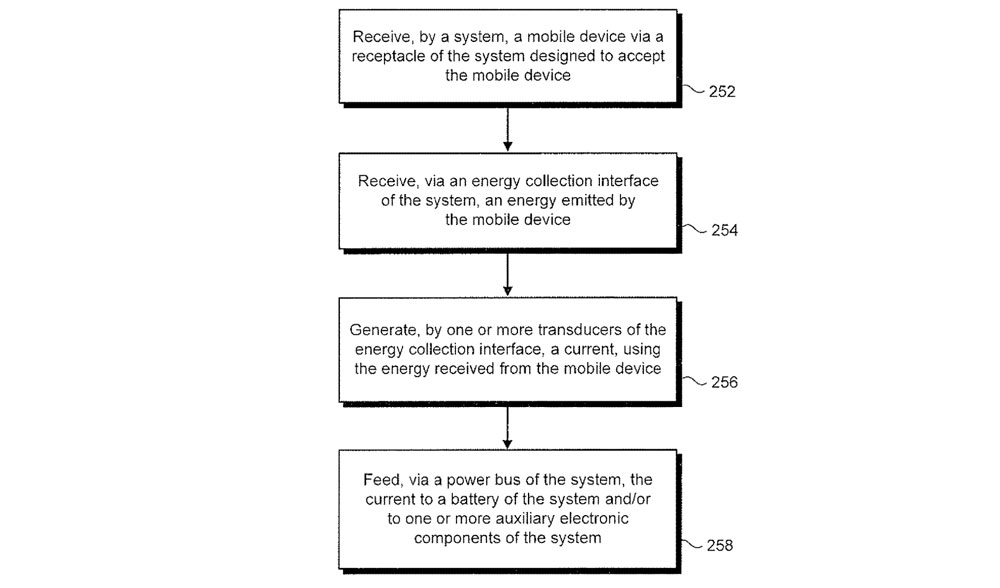 The inclusion of this third patent is in part to illustrate the diversity of Disney Enterprises, Inc.’s interests, and in part because it relates to other areas that they are currently working on. “Energy Harvesting from a Mobile Device” aims to convert energy from a user’s cellphone into power for an attached device.

More and more electronics are designed with the ability to connect to a mobile phone, yet these generally require their own power source which makes them bulkier and more expensive. As the application states it,

For instance, lights, amplifiers, speakers, and other auxiliary electronics can significantly enhance the utility of the mobile-embedded or mobile-connected system. However, conventional solutions for powering those auxiliary electronics can undesirably add to the cost, weight, size, and complexity of mobile-embedded or mobile-connected systems.

Throughout the document, Disney uses the same two examples of what kind of technology this would be useful for:

As one example, some augmented reality (AR) viewing systems are designed to accept a smartphone in order to display virtual digital imagery superimposed over images of a real physical environment. As another example, a holographic viewer may provide a virtual holographic display including imaging optics designed to create an illusion of a floating three-dimensional (3D) image from objects rendered on the display screen of a smartphone or tablet computer that is inserted into the holographic viewer.

So the designs of these AR viewers and holographic displays would include transducers which could convert different types of energy from the attached mobile device — light, heat, sound, radio — into usable current to power the device.

As must always be noted, the existence of an application does not guarantee a patent’s approval, and the existence of an approved patent does not guarantee the technology will ever get used. These applications simply give us insight into which areas The Walt Disney Company is focused on, and what we might see coming from them at some point in the future.