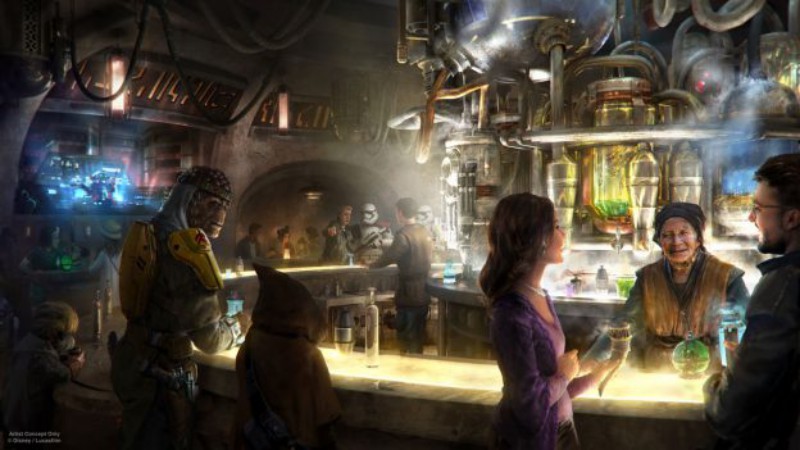 Today, Disney released a new detail or two about the cantina that will part of Star Wars: Galaxy’s Edge when it opens at Disney’s Hollywood Studios and Disneyland Park next year.

Disney expanded on the folklore behind the new watering hole:

“Visitors come to this notorious local watering hole to unwind, conduct shady business, and maybe even encounter a friend…or a foe. Run by an intriguing alien proprietor, Oga Garra, the cantina adheres to a strict code of conduct that tries to keep its unruly patrons in check. But with a history of being a smugglers’ safe haven and a popular stopping point for those seeking to avoid the authorities, you can bet that the cantina has a story or two to tell.”

Disney confirmed at last year’s D23 Expo that Rex (RX-24), the original droid from Star Tours will be provide musical entertainment inside the cantina.

Menu items in the cantina will made made with “exotic ingredients using otherworldly methods” and be served in “unique vessels.”

Disney may have also confirmed the long-time rumor that Galaxy’s Edge will be the first public area in Disneyland Park to sell alcohol with its discussion of the menu.

“With choices for kids and libations for adults, the cantina will make for a great stop.”

UPDATE: Disney has confirmed to the Orange County Register the cantina will serve alcohol with the following statement from park spokesperson Liz Jaeger:

“Star Wars: Galaxy’s Edge will be a completely immersive true-to-story experience. Given our commitment to offering fans an immersive cantina experience, we felt this was an opportunity to offer alcohol and non-alcohol based beverages in the context of the story.”

Star Wars: Galaxy’s Edge, and Oga’s Cantina, opens in Disneyland Park next summer and at Hollywood Studios late next fall.