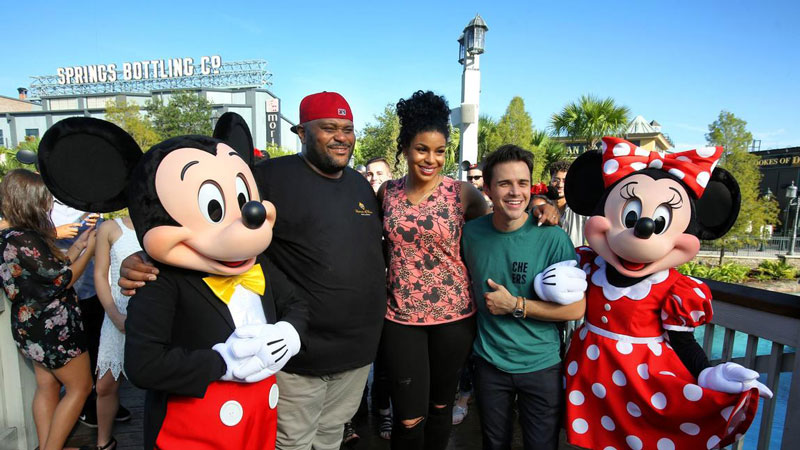 American Idol is celebrating its new ABC home by holding auditions for its returning season in Disney Springs, and yesterday was the first day for fans and hopefuls to display their vocal talents. Long lines of prospective contestants gathered in the sweltering Florida heat, joined by some Idol alumni who were there to share their views on auditioning and their thoughts about the show’s new Disney connection.

Ruben Studdard, Jordin Sparks, and Kris Allen, all previous Idol winners, were present to support the massive crowd of aspiring singers and share their personal feelings about the show that gave them a chance to shine.

Jordin Sparks, winner of season six and longtime American Idol fan herself recalled her first experience wanting to be a part of the show, watching Kelly Clarkson become the season one victor. She recounted,

“I looked at my mom and said, ‘I want to do that.’ I wanted to be onstage evoking emotions through song.”

She also added some perspective on what the judges are expecting of potential contestants waiting it out in the Florida summer heat, saying,

“They’re seeing how well you can handle everything. Can you handle the heat? Can you keep your attitude in check when you’re tired? Can you have other songs in your pocket? Can you maintain your voice? How are you interacting with other people?”

She sees Disney-owned ABC as an appropriate home for Idol, because the show is all about family.

Ruber Studdard, the second season’s victor, stressed what an impact the show had on his life, saying,

“I knew when I was 11 I wanted to be a professional musician. American Idol was the catalyst for me to get to do a job that I’ve been wanting to do my whole life. So I’m just really thankful.”

As for Idol‘s move to ABC, Studdard (donning Mickey ears for the event)is excited about the change but reminded people that the goal of boosting aspiring musicians hasn’t changed and “American Idol is still American Idol.”

Kris Allen, who won the competition in season eight, thinks the Disney connection will raise the show even higher than before, saying,

“I thought the show was great before. I think adding Disney into the equation definitely puts it in the upper echelon of amazing shows.”