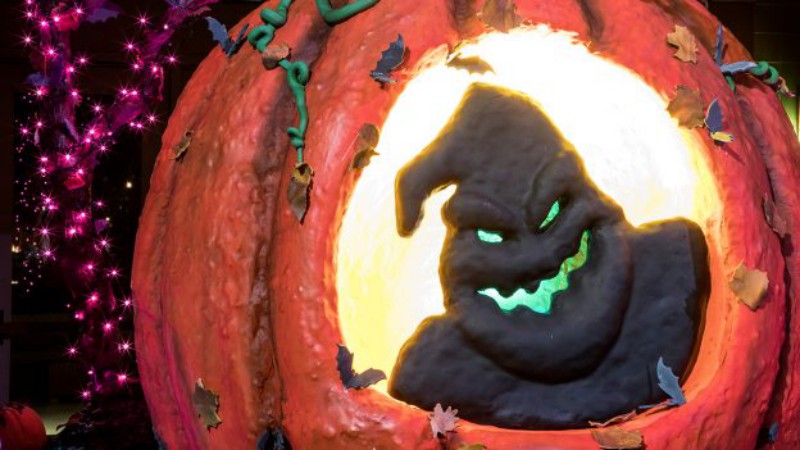 In the lobby of Disney’s Grand Californian Hotel, pastry chefs have created a huge display built from crispy cereal treats. Oogie Boogie takes the center stage, but explore the display for 13 Hidden Mickeys. Chefs used 200 pounds of icing, 100 pounds of chocolate, and 300 pounds of fondant to complete the display. The Disneyland Hotel has also decorated its lobby for the season and pirates have taken over the lobby at Disney’s Paradise Pier Hotel.

Throughout the hotels you’ll find the Skeletones and the Cryptix harmonizing a capella tunes to keep you in the Halloween mood.

For guests staying at the Hotels of the Disneyland Resort, there will be trick or treating on select afternoons from October 2nd through October 31st. Guests should check with Guest Services to sign up and get a map. While there, check for other activities like coloring pages, mask decorating, and pirate hat making kits.

Also in the lobby of the Grand Californian is a special holiday cart filled with scary treats, including Halloween-inspired Mickey-shaped cookies, whoopie pies, cake pops, pretzel rods, pumpkin pound cake and Witch Finger cookies. Seasonal treats are also available at the Coffee House in the Disneyland Hotel and Surfside Lounge in the Paradise Pier Hotel. Finally, just outside the hotels in Downtown Disney, look for strolling Scareolers performing a cappella favorites, including “I Put a Spell on You” and “Grim Grinning Ghosts.”