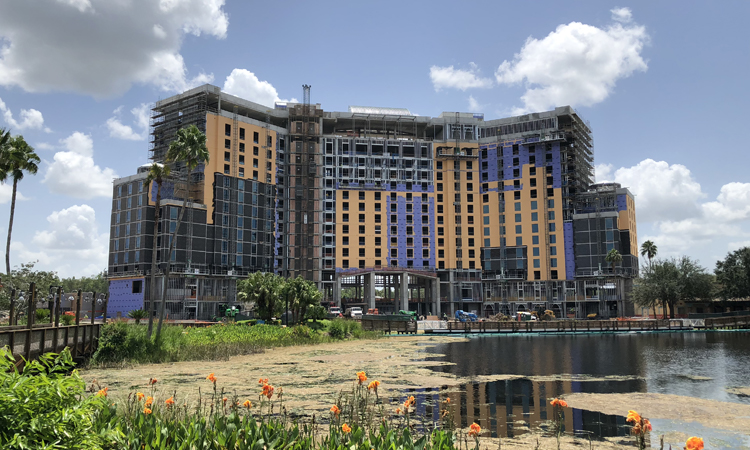 Walt Disney World seems to be ever expanding these days. As more guests than ever are visiting the theme parks, Disney is having to construct new on-property resorts. The two latest projects that are massive in scope include the addition of the 15-story tower at Disney’s Coronado Springs Resort and the addition of Disney Riviera Resort. Both projects are moving along quickly. At Disney’s Coronado Springs Resort the 15-story tower looks to now have most of its exterior walls. Some windows on the lower level rooms have even been added. This massive project has been moving along steadily, but there still is a lot that must be done. In addition to the 15-story tower, Disney’s Coronado Springs Resort is also adding a restaurant to the middle of the water body that the resort surrounds. The photo above features the not yet completed wooden bridge that guests will use to access the restaurant. Disney Riviera Resort isn’t quite as far long as the tower at Coronado Springs, but similarly, the construction seems to be moving along quickly. In person, this resort looks to be much larger than it looks in the concept artwork. For as far along as this new Disney Vacation Club resort is the details surrounding it are still limited.