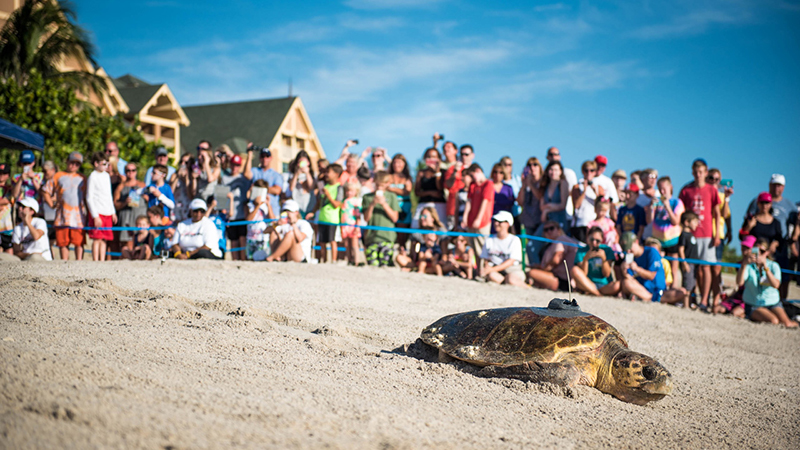 Every year on July 29 at Disney’s Vero Beach Resort, there is the Tour de Turtles event. Guests can watch the race alongside conservation specialists as two turtles nesting on the beach race towards and into the ocean.

The event isn’t entirely about the race. Scientist use the event to also follow 20 sea turtles of four different species. This allows the scientist to “discover more about their habits at sea and to identify migratory patterns that may hold the key to their survival.” This is the 10th year that the Sea Turtle Conservancy has hosted the Tour de Turtles event, which has been great for guests, but also a great tool for the scientists from the Sea Turtle Conservancy.

This year the two participants in the race are Cruz Ramirez and Sally Carrera, clearly named after the Cars 3 characters. Both turtles are loggerhead turtles. This year the “conservation specialists attached satellite transmitters to their shells before the turtles headed out into the big blue world.” The turtle that swims the furthest in a three-month period will be the winner of the event.

Both Cruz and Sally are represented by a sponsor. The Disney Conservation Fund is representing Cruz; this organization has “directed more than $2.6 million to help global efforts to reverse the decline of sea turtles.”

Sally has two sponsors, Disney’s Animals, Science and Environment and Disney’s Vero Beach Resort. The objective of her sponsors is to bring more attention to light pollution. Light pollution can harm sea turtles as they use the starlight to guide them, unfortunately artificial light sources can direct them off course.

Captain Ron is a canine trained to locate sea turtle eggs. Sniffing around the beach alongside Dory, a shelter rescue who is Captain Ron’s doggy understudy, he found the sea turtles’ nests. This was important for the team of conservationists as they now can protect these nests.

If you want to follow along to see how the race is going, track Cruz and Sally at TourdeTurtles.org.