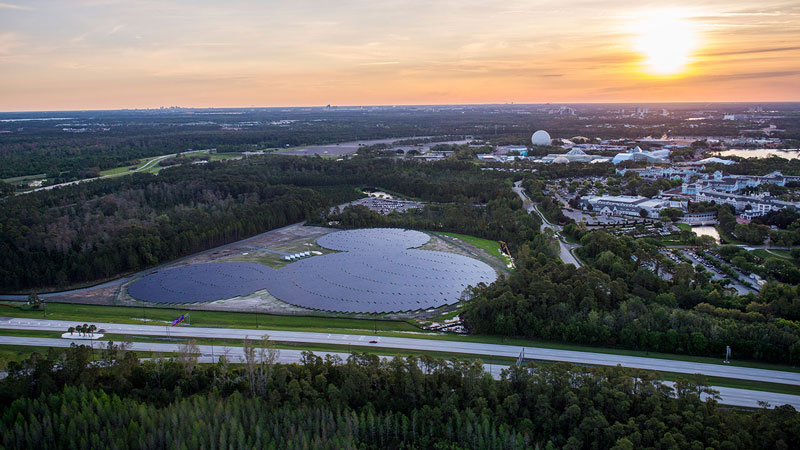 Disney is upping their game in the solar energy department, adding a new complex that will dwarf the current Mickey-shaped solar farm located in the Epcot area. Origis Energy, a Miami-based company with active projects in both Europe and the Americas, has reached an agreement with the Reedy Creek Improvement District to construct a new 50 megawatt solar energy farm.

The complex will span 270 acres and house 518,000 solar panels. In comparison, the current Hidden Mickey solar farm takes up 22 acres and provides 5 megawatts of energy, about enough to power 1,000 homes. Hidden Mickey was built as a partnership with Duke Energy in 2016, part of a 15-year agreement which allows the power provider to construct and oversee the project on Disney-owned property.

The new project is expected to begin in late spring of this year along the east side of State Highway 429, just west of the Disney-owned Magnolia and Palm golf courses. Once complete, it will provide energy to the Reedy Creek Improvement District and, in turn, to Walt Disney World. The project should create approximately 300 new jobs throughout its run.

“We’re excited to begin work on a new solar facility as part of our ongoing responsibility to oversee land use and environmental protections within the district. This project will significantly enhance our renewable energy abilities and create new environmental opportunities in the future.”

Origis boasts over 100 projects worldwide, equaling out to a combined developed solar capacity of over 1 gigawatt. They have collaborated with U.S. power and utility providers including The Southern Company, Pacific Corp., Idaho Power, South Mississippi Electric Power Association, and the City of Tallahassee.