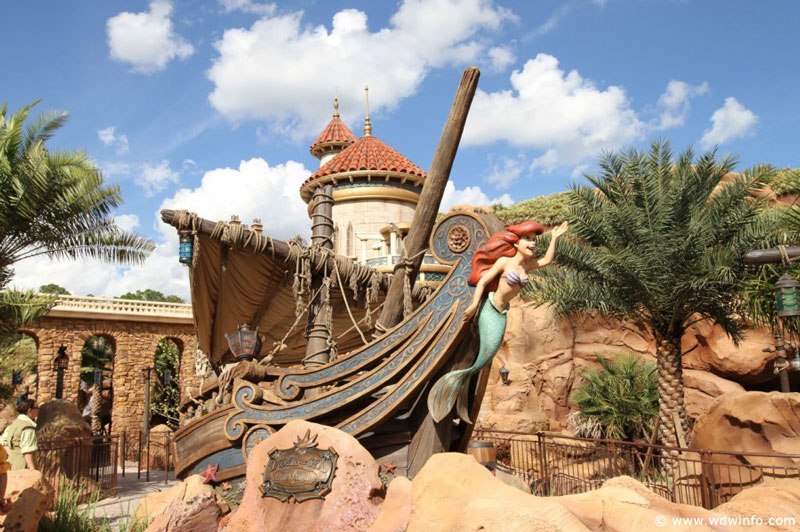 “Nowhere else could we have had such an incredible experience during such crappy circumstances,” wrote father Dave Diaz when describing the day his family’s stroller was stolen at the Magic Kingdom. While Diaz and his family enjoyed Under the Sea: Journey of the Little Mermaid their stroller was taken, but thanks to some online detective work, the lost property was recovered and the thief arrested.

Diaz gave a lengthy account of his family’s experiences on Facebook, explaining where the stroller was stolen, how Disney handled it, and his process with law enforcement after the theft.

Upon exiting Under the Sea, the family noticed their stroller was missing, and a cast member started to assist them in their search. As is often the case, their worries weren’t just about the stroller itself, but all of the supplies that had been kept with it. Diaz wrote,

“The car seat was attached and we need that to get home. We also had our diaper bag in there with everything we needed to have happy children. We had jackets, blankets, a Fuelrod to keep our phones charged, everything.”

What was sure to be a harrowing ordeal for the family was somewhat lightened by the great deal of cast member help and support that the Diaz family received. Dave explains that Walt Disney World cast members were with his family every step of the way, helping them arrange for food, transportation, a police statement, and even gifts for the kids. He wrote,

“The reality is that of course, both (my wife) and I are incredibly upset about the whole thing, (but) good thing this happened at Disney.”

This took place on a Saturday night, by Monday the stroller was already for sale on numerous sites, including Facebook Marketplace. It was unaltered, having the same configuration as when the family last saw it, complete with toys still attached to the handlebars. Although the Diaz family had numerous pictures of the stroller and knowledge of the items on it, getting it back was not as easy as they’d expected.

“One small hiccup. None of the things I had were all that unique. Anyone could have bought my exact same setup and built it the same way. Highly unlikely, but possible. We need hard evidence that, that specific stroller and car seat belonged to us. We needed a serial number, or even our names etched into it. Something unique. But we just didn’t have it. All the boxes had been tossed and there was no specific numbers on any of our receipts. It was starring us in the face, but we couldn’t actually prove that it was ours.”

Although Detective Hinson, who was working their case, believed the family, without hard evidence nothing would hold up in court. They finally realize that the base of the car seat (still in their possession) has a serial number that would match the stolen seat. They sent the serial number over to the detective and waited. The next time they checked the ad, they were distraught to find that their stroller had been listed as sold.

Diaz again spoke with Detective Hinson, who assured him that he was doing everything he could, but it wasn’t until the next call that he realized what had transpired.

“‘Do you have the receipt for the new car seat you bought?’ I ask him for what, a bit confused. He responds with, ‘Because I want to make sure that you can return it. We’ve recovered your stuff!'”

After setting up a fake Facebook account and messaging the stroller’s seller, Hinson met Amanda Poynor, listed as “Amanda Freedom” in the add, and purchased the stroller for $650. Upon comparing serial numbers, Hinson verified that the stroller belonged to the Diaz family.

The stolen property has since been returned to Diaz, who has expressed gratitude throughout this process to both cast members of Walt Disney World and the police detectives involved in retrieving his property. Amanda Poyner is facing a felony charge of dealing in stolen property.

A similar incident unfolded in May, when Michelle Craig was arrested for grand theft after allegedly using her daughter as an accomplice to steal luxury strollers.