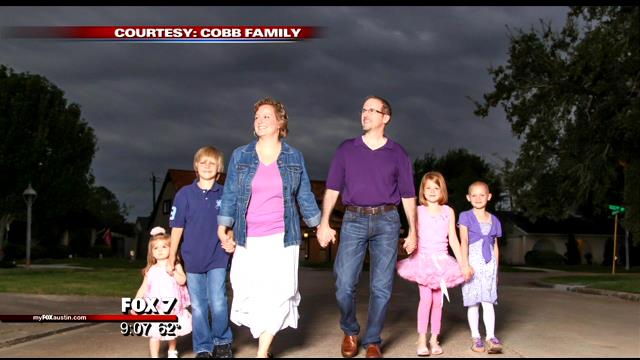 The Cobb family of Houston, Texas, is walking from Disneyland in California to Walt Disney World in Florida in honor of their daughter who passed away from cancer. Jonathan and Jennifer Cobb and their three kids want to raise awareness for childhood cancer and to remember Julia “Ju” Cobb, who passed away at the age of 8 from Ewing’s Sarcoma, a form of bone cancer. When Ju was diagnosed, they decided to focus on the first three letters of the word “cancer” and came up with the phrase Ju Can. Both Jonathan and Jennifer’s mothers passed away from cancer and Jonathan has fought it in the past.

Julia was diagnosed at the age of 6 and fought for a year and a half. After a nearly successful stem cell treatment, she was making improvements when the cancer came back. One of her doctors sent the family on a Make-A-Wish trip to Walt Disney World. Julia woke up sick on the last day, was taken to the hospital and passed away within 24 hours.

So far, the family has been walking for seven months and expect to get to reach Florida by May or early June. They began in August and walk 25 miles each day. Because the children are young, one parent follows behind in their Suburban for breaks. They’re staying in hotel rooms that have been donated to them and are home-schooling the children along the way.

Photo credit: My Fox Austin via My Fox Orlando