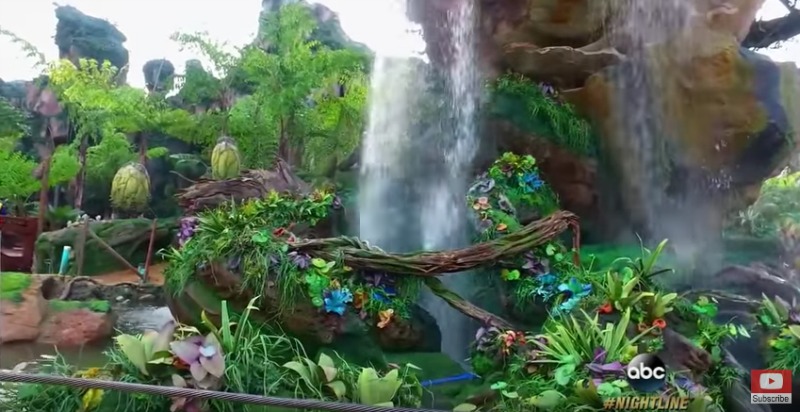 Last night at 12:30 a.m., our fourth and final sneak peek into Pandora – The World of AVATAR made its debut. This time, Paula Faris continued her tour with Joe Rhode as well as James Cameron.

Faris took a ride on the Na’vi River Journey where we caught the longest look so far of the beautiful, glowing forest. As Rhode declared, “we’ve been welcomed into the culture because of our motives.” This beautifully-themed land is set generations past what we saw in the first movie; after the animosity between the Na’vi and humans has faded away. During the tour, James Cameron commented that he’s just completed the script for the 5th film. As we previously mentioned, all four sequels are in early pre-production, but no release dates have been announced.

We were also given another look at the Na’vi Blueberry Cheesecake as well as a special glowing drink containing the nectar of pongu pongu topped with passion fruit boba. A very clear view of the seating on Avatar Flight of Passage was shown as well. It appears that you simply walk into “linked chairs” and sit right down on a type of seat. Take a look at the video below to see the exciting footage.

To see the first three sneak peeks from March 9, 2017, click the following links: