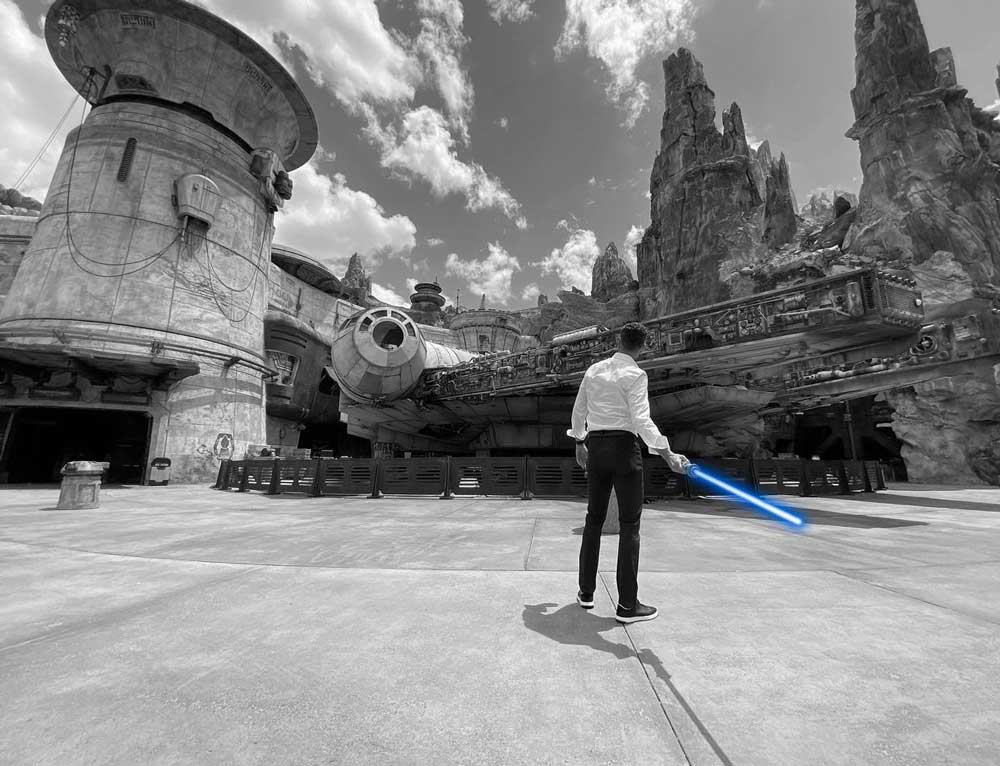 UPDATE: Walt Disney Imagineer Scott Trowbridge has confirmed on Twitter that the lightsaber showcased by Josh D’Amaro was in fact real, not CGI, and it’s still not ready to be shown to the public.

A lot of questions today about whether the lightsaber that Josh D’Amaro revealed today was real or CGI, and, whether I’d share photos or video.

Yes it was/is really real, and….. not yet. #Bringingagalaxyfarfarawaytolifehttps://t.co/lMc964tn8Y

During a virtual event dubbed “A Special Look Inside Disney Parks” hosted by Josh D’Amaro (Chairman | Disney Parks, Experiences and Products), Disney showed off what appeared to be a real working lightsaber. We’re not talking about the ones you can already purchase inside Star Wars: Galaxy’s Edge at Disney’s Hollywood Studios and Disneyland. We’re saying it was a real working lightsaber. as in a light blade emerged from a hilt with sounds.

The virtual presentation was for invited media/guests and mainly focused on a conversation between D’amaro and Kevin Feige (President | Marvel Studios). The conversation ended with the announcement of Avengers Campus opening on June 4, 2021. According to Carlye Wisel, as the presentation was wrapping up, D’Amaro stated, “You never know what we’re going to come up with next.” He then pulled out a hilt-like box, turned it on to reveal a light blade and claimed, “It’s real.”

Here’s how it went down:

Josh D’Amaro was saying his goodbyes, ending with “…and you never know what we’re going to come up with next”.

He then *zhooped* a lightsaber out of this little box (like a hilt but much wider), adding: “It’s real.” 💀💀💀 pic.twitter.com/dkSFLSJiGW

According to Scott Gustin, Disney has no plans to reveal photos or videos of the lightsaber seen during the virtual event.

Update: I am told Disney will not be releasing video of the lightsaber.

Note: I really hope I’m wrong and someone can shove this tweet in my face and say I’m an idiot. I’m literally begging…

However, we may have a better understanding as how it worked thanks to patents Disney filed back in 2017. The patent is for a sword device with retractable, internally illuminated blade. In the patent, Disney also recognizes that to make these swords in films, CGI is needed to realistically extend and retract a blade. Disney also says, “Briefly, the inventors recognized that there was a need for a new special effects device that can be used as a theatrical prop, toy, or collector’s item that effectively simulates fictional energy swords including the lightsabers found in many popular films.”

The patent for Disney’s lightsaber is intriguing. Basically, a plastic blade is cut in half lengthwise and rolled into a hilt on a spool like a tape measure. The blade will emit with the two blade pieces unrolling outward and connecting with an end cap which has a flexible strip with lights attached. It can also retract back into the hilt.

This is just a patent for Disney’s design and it doesn’t necessarily mean that this is the lightsaber device that Josh D’Amaro was wielding in the presentation, but it could be similar.

In a post on Disney Parks Blog, D’Amaro wrote, “I recently had a chance to catch up with our team at Walt Disney Imagineering Research & Development, and while the projects they shared are in an early exploration stage, they’re the type of projects that will shape the future of the guest experience for decades to come. Leslie Evans, Executive R&D Imagineer, explained how the character platforms we’re working on bring unique capabilities and experiences to life that aren’t humanly possible today. I can’t wait to share more with you in the near future – this team is really pushing the boundaries of creativity, technology and storytelling.” This could also be a reference to Disney actually succeeding in making a real lightsaber.

It’s also possible the lightsaber wasn’t actually real and it’s a tease of what is to come in the future. There will be a lightsaber experience on the Star Wars: Galactic Starcruiser experience which is set to debut in 2021 and it could be a glimpse of what they are preparing for the cruise-like experience. It could be solely for that experience, a product they hope to sell in the future, or a prop for a special show. Hopefully we receive more details soon.