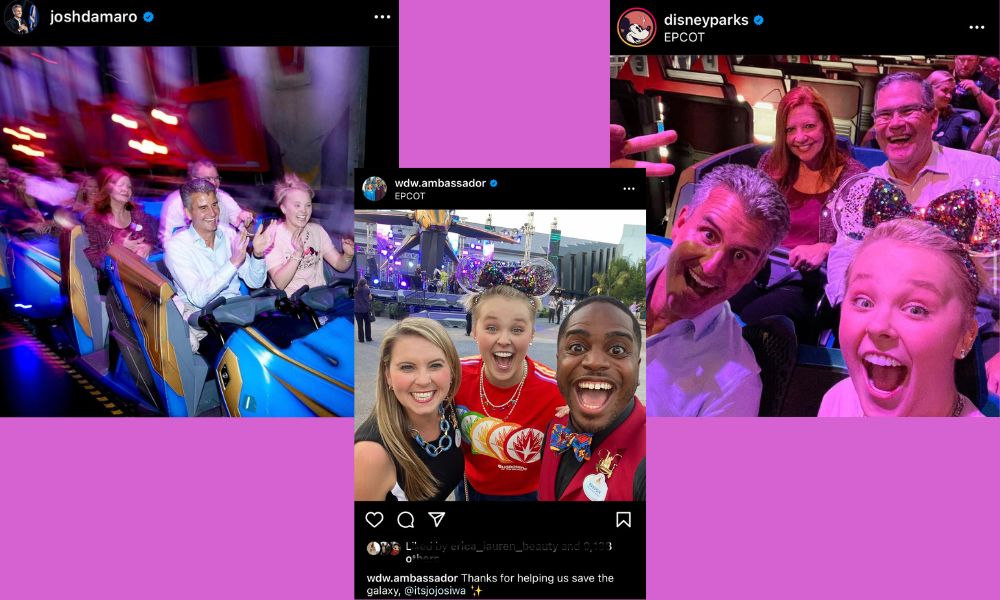 JoJo Siwa, a star from Dance Moms, Dancing with the Stars, and Nickelodeon, seems to be keeping Disney in her back pocket. She loves to visit Walt Disney World and Disneyland, but will we see her become a new Disney star?

During the Guardians of the Galaxy: Cosmic Rewind media event, Siwa rode the attraction with Josh D’Amaro and Jeff Vahle. While at the event at EPCOT, the Walt Disney World ambassadors caught a picture with the former Dance Moms cast member. They posted the image on the Walt Disney World ambassador’s Instagram and captioned it, “Thanks for helping us save the galaxy.” Siwa also appeared on the Disney Parks TikTok account, stating that Cosmic Rewind is their favorite ride ever from any amusement park.

The reason I think maybe, just maybe, she might be making the jump to Disney is because of recent events that happened between her and Nickelodeon. In January of 2021, Siwa publicly said that she is part of the LGBTQ+ community and the happiest she’s ever been. She is also a high-energy performer and goes on tour worldwide to sing to her fan base after releasing a movie called The J Team; her next tour would be following closely behind after Dancing with the Stars.

In September of 2021, Siwa said, “Nickelodeon told me today that I am not allowed to perform/add any of the songs from the film in my show.” She later wrote on Twitter, “These are MY songs, MY voice, My writing.” Of course, social media started speculating this might be due to her coming out and being part of the first same-sex couple on Dancing with the Stars.

On April 6th, Siwa cut her long blonde hair into a very stylish pixie cut. The internet was freaking out over her vast transition since she always wore her hair in a ponytail with a giant bow for most of her childhood. On April 9th, Nickolodeon held the Kids Choice Awards and was nominated for an award. The sketchy part is that she wasn’t invited to the award show. These situations took place at the time of the “Don’t say gay” bill and the PR mess Disney got into regarding the bill.

Seeing Siwa all over Disney’s social media, from Josh D’Amaro’s Instagram to Jeff Vahle’s Instagram and the Disney Parks TikTok, makes me wonder if she is jumping to Disney. Or is Disney using her to help their image and show support for the LGBTQ+ community by posing with her? Or will she become the new face of a Disney+ original show? Who knows.

Do you think JoJo Siwa is making the jump to Disney? Let us know in the comments.