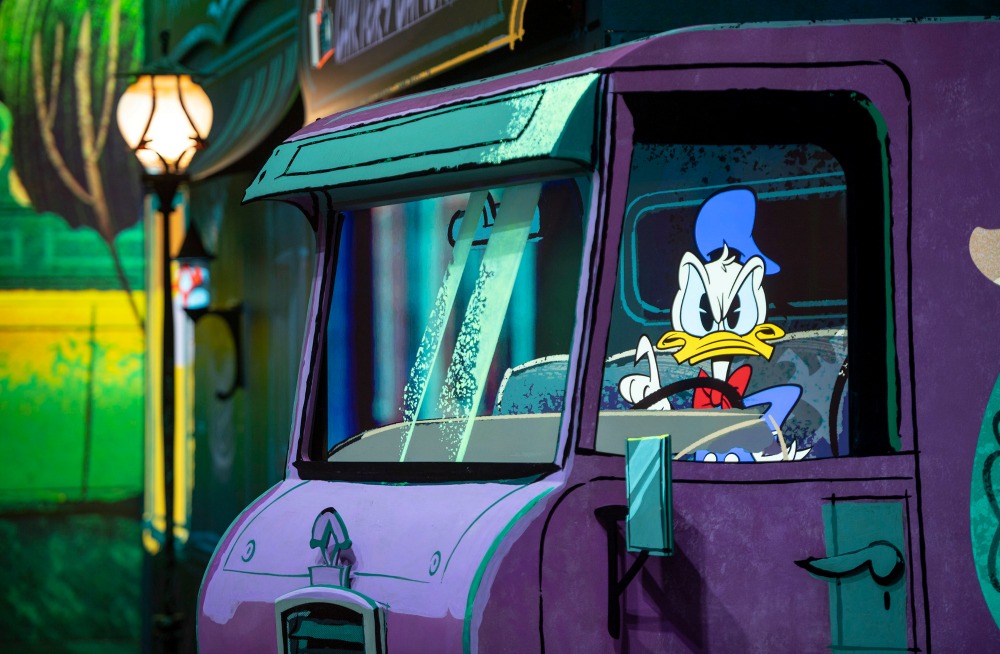 It’s a world premiere nearly a century in the making!

When Mickey Mouse burst upon the silver screen in 1928 as the star of Steamboat Willie, he changed the world of entertainment forever. With his childlike innocence, impish sense of humor and plucky attitude, Mickey is adored the world over and has become a cultural icon synonymous with Disney.

Through all of his many adventures, though, there’s one thing Mickey has never done: starred in his own ride-through attraction in a Disney theme park. That is about to change on March 4, 2020, with the debut of Mickey & Minnie’s Runaway Railway inside Disney’s Hollywood Studios at Walt Disney World Resort.

In this bold and innovative new family adventure, guests go through the movie screen inside the park’s re-creation of the Chinese Theatre and into the whimsical world of Disney Television Animation’s Emmy Award-winning Mickey Mouse cartoon shorts. There they discover why “mouse rules apply” and anything can – and does – happen! With an original Mickey Mouse story by Walt Disney Imagineering featuring the new song Nothing Can Stop Us Now, Mickey & Minnie’s Runaway Railway is a celebration of Disney heritage and a showcase for state-of-the-art storytelling and attraction design.

It’s a charming experience for the entire family – from grandparents to grandchildren and everyone in between – full of surprises and pure, joyous fun befitting those true originals, Mickey Mouse and Minnie Mouse.

Anything Can Happen: The Story of Mickey & Minnie’s Runaway Railway

Mickey & Minnie’s Runaway Railway invites families to begin their adventure together at the heart of Disney’s Hollywood Studios. They’re ushered inside the theater for the premiere of a new Mickey Mouse cartoon short, Perfect Picnic, written by Walt Disney Imagineering and produced by Disney Television Animation. In the story, Mickey and Minnie set off on a journey to find the best spot for a romantic picnic, taking their little red convertible for a drive through Runnamuck Park.

Little do they know Pluto has accidentally stowed away in the trunk of their car, so when the roadster hits a bump and the dutiful dog flies out … mayhem ensues.

It’s at this point Disney magic brings guests through the movie screen and into the cartoon world, where they join Engineer Goofy on a train ride on the Runnamuck Railroad, following Mickey and Minnie through the park on their quest for that perfect picnic.

And with Goofy at the helm, what could possibly go wrong? A lot, actually, as along their journey guests will:

It’s up to Mickey and Minnie to keep guests out of trouble, all while poor Pluto tries to catch up and bring them their picnic basket!

Mickey & Minnie’s Runaway Railway is the inspiration for a new line of fun Disney products evoking the attraction’s lighthearted spirit. They include:

Also debuting in conjunction with Mickey & Minnie’s Runaway Railway is the latest headwear design from the Disney Parks Designer Collection. Imagineer Kevin Rafferty designed the piece featuring Mickey and Minnie in the setting of their newest cartoon from the attraction, Perfect Picnic. Launched in May 2019, the Disney Parks Designer Collection is a series of limited-release Mickey ear hats and Minnie ear headbands designed by notable celebrities and artists.

Take a peek at some of the new Mickey & Minnie's Runaway Railway merchandise coming in this article.

Guests playing the game discover five trivia packs containing hundreds of questions – from Steamboat Willie all the way to today. Some of these trivia packs are available prior to arriving at the attraction to help guests prepare for their journey into Mickey & Minnie’s cartoon world, while others can be unlocked after experiencing Mickey & Minnie’s Runaway Railway, extending the fun.

In Their Own Words: The Making of Mickey & Minnie’s Runaway Railway

We’ve taken our whole grab bag of theatrical tricks and blended them together so seamlessly you won’t be able to tell what’s what. There is more happening in each and every scene than you could possibly have time to see in just one experience.

We look at Mickey & Minnie’s Runaway Railway as a musical. The melody of the attraction’s theme song, ‘Nothing Can Stop Us Now,’ takes on all the flavors of the different scenes as you progress through the experience.

This is a once-in-a-lifetime project. It’s an amazing opportunity that I’m honored to be a part of. We are inviting our guests into a Mickey and Minnie cartoon. There are endless possibilities – anything can happen! You have cartoon physics and cartoon logic … there is so much that’s possible.

If you'd like to take a peek at some inside footage that has spoilers, watch the videos below!