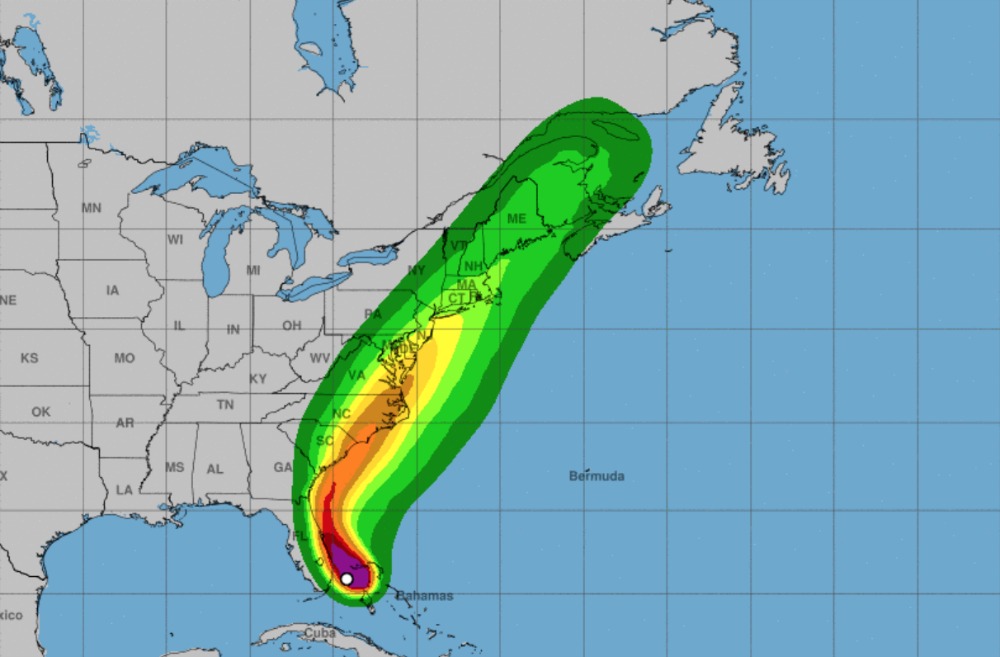 UPDATE 8/3/20 | 8am: Effects of Tropical Storm Isaias are no longer expected in Central Florida and the threat of heavy rains and flooding has shifted to the North Carolina and South Carolina coastlines.

UPDATE 8/2/20 | 8am: Isaias is continuing to bring tropical storm conditions to The Bahamas. The storm is traveling northward along the east coast of Florida at 8mph with maximum sustained winds of 65mph. While storm surge is to be expected in counties along the coast, Central Florida can expect heavy rains and possible urban flooding in low-lying and poorly drained areas.

UPDATE 8/1/20 | 5pm: With the 5:00 p.m. update, Isaias has further weakened from its hurricane status to a tropical storm but is expected to return to a hurricane overnight. Maximum sustained winds are currently at 70mph and the storm is only moving at a slow 10mph northwest.

UPDATE 8/1/20 | 11am: Hurricane Isaias has slightly weakened according to the latest update from the National Hurricane Center. The current forecast has the hurricane remaining at a low category 1 with maximum sustained winds at 85mph.

The storm is still expected to approach the southeast coast of Florida later today.

UPDATE 8/1/20 | 8am: Hurricane Isaias is currently traveling northwest at 12mph with maximum sustained winds at 85mph. Most counties under hurricane watch are on the east coast, but heavy rains and flash floods are expected from south to east-central Florida.

UPDATE 07/31/20 | 5pm: Florida Governor Ron DeSantis has declared a state of emergency for counties on the east coast of the state that are in the path of Hurricane Isaias, from Miami-Dade to Nassau counties. Current projections still have the eye of the hurricane at sea.

Arrival times have only shifted slightly as of the last update from the National Weather Service, with the storm moving northwest at 15mph.

UPDATE 7/31/20 | 11am: The newest update on Hurricane Isaias shows that the storm has shifted west and may begin to affect south and east-central Florida as early as late Friday night.

UPDATE 7/31/20 | 8am: Isaias has been upgraded to a Hurricane. Isaias is moving Northwest at 17mph with maximum sustained wind speeds of 80mph. Today, the storm will produce heavy rain, flash flooding, and mudslides across the Dominican Republic, northern Haiti, Turks and Caicos, and The Bahamas.

UPDATE 7/30/20 | 8am: Tropical Storm Nine has been upgraded to Tropical Storm Isaias and is moving Northwest at 20mph with maximum sustained wind speeds of 60mph. The graphic below shows the estimated arrival times of winds.

UPDATE 7/29/20 | 5am: This morning’s update shows the newest information from the National Hurricane Center. This storm is one to keep an eye on as it could impact the Central Florida theme parks over the weekend.

The National Hurricane Center has announced that potential Tropical Cyclone Nine is forecast to become Tropical Storm Isaias as it heads toward the U.S. later this week.

Warnings are currently posted for several islands in the projected path including Puerto Rico.

If you’re getting ready to travel to Florida in the near future, we recommend that you keep an eye out on this storm for any further developments as it is in the very early stages of forming at the time of this post.

This post will be updated at the top with any new information as it’s released from the National Hurricane Center.