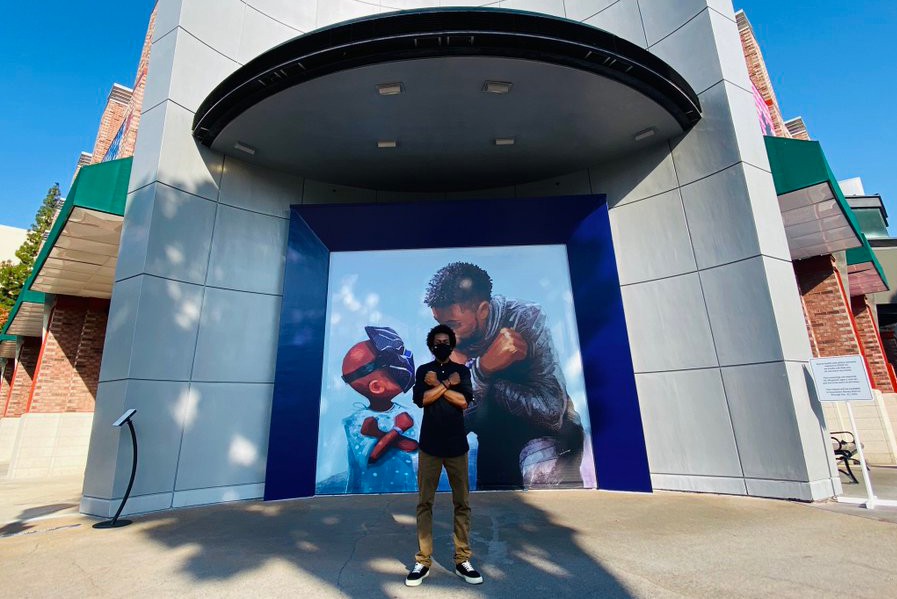 Southern California artist Nikkolas Smith has shared a look at a new piece that he created as a tribute to the life of Black Panther star Chadwick Boseman, who died last month at the age of 43 after a battle with colon cancer. “King Chad” is now on display on the former ESPN Zone building in Downtown Disney at the Disneyland Resort

Smith, who worked at Walt Disney Imagineering for 11 years, is a concept artist, author of children’s books, and film illustrator.

My #KingChad tribute is now on display at Downtown Disney. I’m so thankful to be able to honor Chadwick’s life and purpose in this way. I am grateful to the @Disney family for being so supportive of my journey as an artist.
🐾✨ #LongLiveTheKing
#WakandaForever @Disneyland pic.twitter.com/jbav7ItqA7

This morning, a heartwarming and beautiful piece of art was put on display in #DowntownDisney. We are deeply honored to feature “King Chad” as a tribute to our beloved ‘Black Panther’ hero, Chadwick Boseman. Many thanks to concept artist (and former Disney Imagineer), Nikkolas Smith, for sharing this inspirational tribute to Chadwick’s life and legacy. #WakandaForever

So proud of @Nikkolas_Smith and his incredibly moving tribute to Chadwick Boseman. As an Imagineer, Nikk constantly impressed us with his talent and vision, but seeing all he has achieved on his own is truly an inspiration.